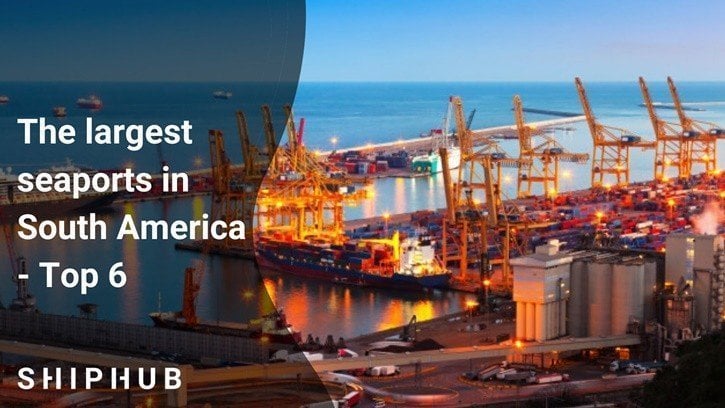 When discussing the shipping industry, South America is often overlooked. This is mainly because none of the ports in South America are on the list of the top 20 ports in the world. However, routes to and from South America account for 15% of total commercial services. Also, there is the Panama Canal, which connects the waters of the Atlantic Ocean with those of the Pacific Ocean. Therefore, the article presents the largest seaports in South America with their short descriptions.

The port of Itaqui is the largest and busiest port in Brazil. It is located near the city of Sao Luis in Maranhao. In recent years it has significantly reduced waiting time, doubling the volume of containers and tripling the total number of tonnes handled. The port of Itaqui has thus established itself as one of Brazil’s most important transshipment hubs.

Besides, the port of Itaqui is planning to invest in a new general cargo terminal, which will serve mainly pulp and paper. The investment in the project will include a warehouse, railway sidings, and a dedicated parking space that will cover an area of 53,545 m². Its costs are estimated at at least 62 million USD.

The Brazilian port of Tubarao is the second busiest port in Brazil and South America. The port is located near the town of Vitoria. The port of Tubarao, in Espírito Santo, is widely regarded as the world’s largest producer of iron ore and pellets. For this reason, the port of Tubarao specializes in exporting iron ore extracted from nearby mines in Minas Gerais.

Since 1969, after the installation of pelletization equipment, the port has been transformed into the Tubarão complex. Currently, the port has five tipper cars with a capacity of 7,000 tonnes per hour and six terminals that handle 120 million tonnes of products per year. The terminal shipyards can accommodate about four million tons of ore and pellets.

The Port of Tubarao is the largest port of iron ore transportation in the world, serving 80 million tons per year. Shipowners serving the port of Tubarao are Alianca, Grimaldi Napoli, Hamburg-Sud, HSLR, MSC.

The port of Santos was, for a long time, the busiest and largest port in Brazil, until Itaqui took first place. It is located in the Brazilian city of Sao Paulo, 70 miles from the industrial city. However, it still ranks first in terms of logistics capacity in South America. It has terminals for handling solid and liquid cargo in bulk, in containers and general cargo transport.

The capacity of the port is 119 million tons of cargo and about 1. 6 million TEU per year. It supports the connection of over 600 ports in 125 countries. In 2018 the port was responsible for processing 133 million tons of cargo and 4. 1 million TEU, generating $250 million in revenue. The original base includes five states representing 67% of Brazilian GDP. It ranks 39th on Lloyd’s list of the 100 best ports (the second largest in Latin America and the only Brazilian port on the list).

The main product exported by the port of Santos until World War II was coffee. Currently, the main cargo handled in the port of Santos is fertilizers. It is also an important outlet for Brazilian oil exports. Additionally, the services of the port are used to transport cars, machines, juices, and soya.

The port of Callao, also known as El Callao, is the largest and busiest port in Peru. The seaport is located 15 km west of the capital Lima. It’s part of the larger metropolis of Lima. This is the busiest port in South America, not located in Brazil. The port handles 43 million tons of cargo per year.

The Port of Callao is positioned as the undisputed gateway to Peru’s import and export container traffic, as well as an interesting point for regional transshipment.

Cartegena Port is the busiest port in Colombia. It is located on the northern coast of Colombia near the Caribbean. It’s about 265 nautical miles from the Panama Canal. More than 2. 3 million TEU are shipped in the port every year, which is 33 million tons of cargo volume.

Sociedad Portuaria Regional de Cartagena (SPRC) has been repeatedly rated as the Best Caribbean Port by the Caribbean Shipping Association for its high level of performance. The same union also rated him as „the most reliable port.” The port of Cargas is a wide (8200 hectares), deep (21 meters), natural bay, which is also extremely safe (no hurricanes and strong currents in the area). The tidal variation here is less than 40 centimeters.

The seaport serves as the main oil port, as well as an important export terminal for coffee and platinum. Other products, such as fertilizers, textiles, cosmetics, and leather goods, are also sold here.

It consists of several harbor facilities located on the western bank of the Paraná River. It is a major port for the export of agricultural products and represents about 50% of Argentinean maritime traffic. The port transports up to 32 million tons of cargo per year. It handles mainly grain, vegetable oil, refined and raw products.