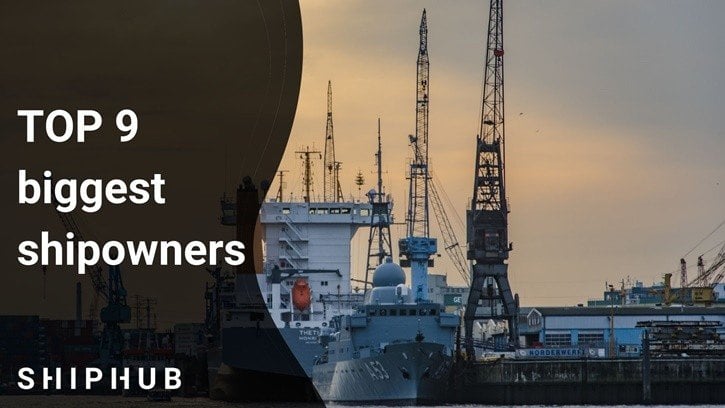 Today, shipping is one of the main modes of transporting goods and passengers. The organs responsible for the organization and operation of the entire maritime transport are called shipowners. A shipowner is a natural or legal person who operates his ship and employs a crew. We wrote more about the shipowner in our previous article. This time, we present the nine largest shipowners in the world, who control the global fleet by 87%. Below we present the TOP 9 largest shipowners.

It’s a Danish conglomerate known to everyone as Maersk and was founded in 1904 in Copenhagen. It’s a public company. The headquarters is in Copenhagen. The company operates in various business sectors, mainly as part of transport and energy. The company has branches and agencies in over 135 countries around the world and employs approx. 120,000 employees.

Maersk’s activity is divided into main segments: container shipping – the largest extent of the company’s operations. The company manages container, logistics and forwarding services under the following brands: Maersk Line, Safmarine and Damco.

It’s the second largest shipping company. The company was founded in 1970 in Italy, and the company’s headquarters is in Geneva, Switzerland. It operates in all major ports of the world, and the most important one is in Antwerp, Belgium. The company also has the MSC Cruises line, which mainly deals with tourist cruises. The company currently has 480 offices in 150 countries around the world and employs over 24,000 employees.

It’s a French transport and forwarding company. It’s the leading global transport group that transports goods. The company was established in 1978, and its headquarters is in Marseille, France. The company uses transport routes between 420 ports in 150 countries. It also has a North American office in Norfolk, Virginia.

China Ocean Shipping (Group) Company is a Chinese state-owned company dealing in transport and logistics. The company was founded in 1961 in China. It has over 1114 ships. It provides services in over a thousand ports around the world. It currently operates under the name Cosco Shipping Lines Co., Ltd and is headquartered in Shanghai.

The company was founded as Evergreen Marine in Taiwan in 1968. The company has headquarters in the city of Taoyuan in Taiwan. The company is concentrated on container transport and forwarding all over the world. The company’s activities include shipping, construction of containers and ships, port management and engineering design, and real estate.

In 2007, the company was merged with Hatsu, Italia Maritima, and functions as an entity under the name Evergreen Lines.

The company was founded in 1970 as a result of the merger of two German transport/maritime companies, Hamburg America Line (HAPAG), which dates from 1847, and Norddeutscher Lloyd (NDL) or North German Lloyd (NGL), which was founded in 1856. The company deals with sea transport. Currently, it has 222 ships and has 394 offices in 127 countries.

The company was founded in 1871. The headquarters is in Hamburg. It ranks among the ten biggest container shipping brands in the world. Since 2017, it is part of the Maersk Line company.

It’s a shipping company based in Keelung, Taiwan (ROC). This shipping line was founded in 1972. It has historical connections through the merger with the China Merchants Steam Navigation Company, which dates back to the Qing Dynasty (1872-1995). Currently, Yang Ming serves 84 container ships.

The company was founded jointly in July 1976 by six governments of Arab states of the Persian Gulf (Bahrain, Iraq, Kuwait, Qatar, Saudi Arabia, and the United Arab Emirates). At first, the headquarters was in Kuwait and then moved to Dubai during the Iraq conflict. The chain included more than 200 ports, offering container and conventional shipment of a fleet of 52 own vessels.

In 2016, Hapag-Lloyd started talks with UASC to merge the two companies. In 2017, the company was incorporated into Hapag-Lloyd.

This is how the TOP 9 largest shipowners are presented. These are companies that enjoy great popularity and trust of their clients.