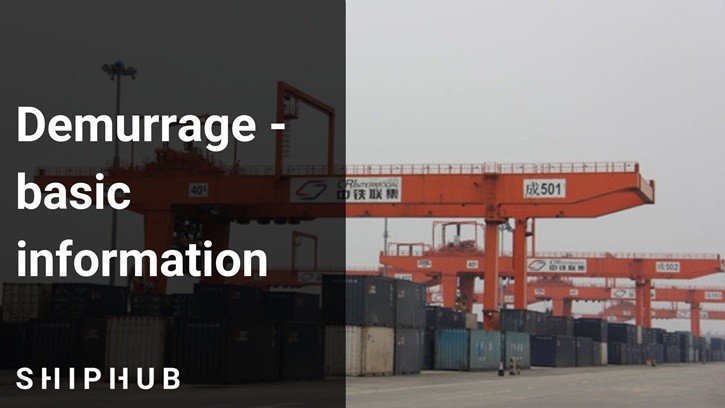 Time is significant for importers. It is best that the ordered goods are delivered to the right place in a predetermined time. Demurrage is one of the terms that is worth to know. In short, it determines the stoppage in transport. It happens when there is a delay in delivery of the goods to the place designated by the buyer.

Demurrage determines the stoppage in transport and occurs when there is a delay in delivery of the goods. In this situation, the exporter is obliged to pay the parking charge to the charterer, as compensation for the caused inconvenience. The amount of the fee depends on the daily amount of downtime and the number of days the vessel has spent in the port. The longer lateness when delivering the goods, the higher the costs an importer or exporter will have to pay (as previously agreed).

When do you get demurrage?

According to many opinions, demurrage turns out to be more burdensome for the recipient than detention.

The demurrage fee also depends to a large extent on the type of container. There are other rates for containers 40 ‘, for 20’ containers, as well as for refrigerated containers. Rates change as days go by. Usually, not taking a container in 1-5 days costs about 15 euros for one day. For the sixth day of not picking up the container and also every next day, we will pay about 20 euros per day. It is always worth checking carefully when the container arrives at the port of receipt to avoid unwanted costs.

Time from the carrier

Information on the number of days a carrier gives the recipient always appears at the notification of the container. Instruction shall be provided for the notification, which should be provided to the recipient in the case of using the forwarding agent’s services. The forwarding agent will also provide the necessary instructions on charging demurrage fees.

The recipient should not hesitate to pick up the goods. The costs grow with each passing day. Until the payment, the products cannot be released.

What can happen to a non-collected commodity?

In extreme situations, the goods not accepted for many days may be sold by the carrier to settle the costs related to the extended storage. It is sometimes more profitable for the recipient to abandon their load than to cover rapidly growing costs.

Often when the recipient decides to give up his load, it happens that the carrier will want to get demurrage charge from the shipper. This is because both the recipient and the shipper on the bill of lading are referred to as “Merchant.”

The free period from demurrage fees

In container’s transport, the carrier usually provides a period free of charge for demurrage and detention. During this time, the carrier does not charge any additional fees for the use of the container, thus giving the recipient time to organize transport safely, unload the goods and return the empty container to the carrier in a place designated by him.

Fees for demurrage can be very burdensome for the recipients; however, it should be remembered that not picking up the goods on time and keeping the container in one place, we also delay other activities. By holding the container, the possibility of using it by another entrepreneur is withdrawn. Demurrage costs are used as an incentive for punctuality. By imposing additional fees, they try to encourage recipients to receive their goods at the appointed time, thereby minimizing container downtime.