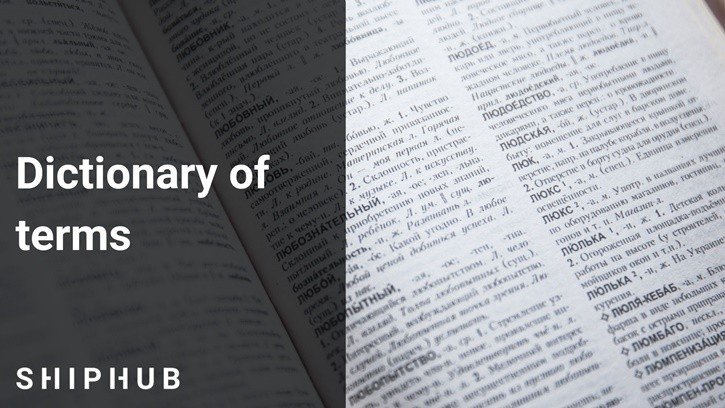 When we are doing business with China or generally engaging in international trade, we can often encounter various terms and acronyms. We need to be familiar with them. Especially when we make transactions, close business deals and complete the formalities. We compiled a dictionary of terms so all the businesspeople who undertake to import goods from China can familiarize with them. Also, it’s good to know that listed terms are commonly used by the entrepreneurs around the world. As a result we invite you to read this dictionary of terms.

ADR – a treaty that governs transnational transport of hazardous materials.

AWB (Air Waybill) – a non-negotiable transport document between a shipper and a carrier that covers the transport of cargo from airport to airport.

Bill of Lading (B/L) – the ocean waybill. On its basis, a carrier acknowledges receipt of cargo for shipment and undertake to deliver goods at the predetermined destination.

CMR – the road waybill. A document between a shipper and a carrier giving details and also instructions relating to the transit of goods.

Waybill – official shipping document between a shipper and a carrier. It also travels with a shipment, identifies its consignor, consignee, origin and destination.

Bonded warehouse – secured facility supervised by customs authorities, where dutiable imports are stored pending their re-export or release on assessment and payment of import duties, taxes and other charges. Also called customs warehouse.

Customs – an authority or agency in a country responsible for collecting tariffs and for controlling the flow of goods into and out of a country.

Customs broker – a person who assists businesses in clearing imported or exported goods through customs.

Freight forwarder – a person or company that organizes shipments for individuals or corporations to get goods from the manufacturer or producer to a market, customer or final point of distribution.

HKTDC (the Hong Kong Trade Development Council) – a statutory body dedicated to creating opportunities for Hong Kong’s businesses and promoting a positive image of Hong Kong in the world.

Shipowner – the owner of a merchant vessel who equips and exploits a ship, usually for delivering cargo.

Demurrage – fees charged when import containers are still full and under the control of the shipping line.

Detention – fees charged when the consignee holds onto the carrier’s container outside of the port.

Import Duty – a tax collected on imported and some exported goods and services by country’s customs authorities. Import duty may also be referred to as customs duty, tariff, import tax or import tariff.

Letter of Credit (L/C) – a payment mechanism used in international trade. It is a written commitment from a bank on behalf of one party that guarantees payment to a third-party, provided that the stated terms and conditions have been met.

OSA (Offshore Account) – a bank account maintained by an individual or business in a jurisdiction which they are not normally a resident of.

T/T (Telegraphic Transfer) – an electronic method of transferring funds internationally. The buyer pays for the goods in advance.

Alibaba Group – a Chinese conglomerate founded by Jack Ma. Alibaba.com and Aliexpress.com, two of the largest B2B trade platforms, are owned by Alibaba.

AliExpress – an online retail platform that enables individuals all around the world to buy inexpensive products from China.

DHgate – one of the largest B2B platforms in China.

E-commerce (Electronic commerce) – buying or selling products and services by businesses and consumers through an electronic medium, typically over the Internet.

Global Sources – one of the largest B2B platforms in China.

WeChat –  China’s “app for everything”. It is multi-purpose messaging, social media and mobile payment app developed by Tencent.

B2B (Business to Business) – a form of transaction between two businesses, such as one involving a manufacturer and wholesaler, or a wholesaler and a retailer.

B2C (Business to Consumer) – a form of transaction directly between a business and an individual consumer.

CFR (Cost and Freight) – rule for sea and inland waterway transport defined by Incoterms 2010. The seller pays for the carriage of the goods up to the named port of destination but is not responsible for buying insurance.

CIF (Cost, Insurance and Freight) – rule for sea and inland waterway transport defined by Incoterms 2010. The seller pays for the carriage of the goods up to the named port of destination and is required to obtain insurance for the goods while in transit. Risk transfers to the buyer when the goods are loaded on board the ship.

CIP (Carriage and Insurance Paid to) – rule for any mode of transport defined by Incoterms 2010. The seller pays for the carriage of the goods up to the named place of destination and is required to obtain insurance for the goods while in transit.

CPT (Carriage Paid To) – rule for any mode of transport defined by Incoterms 2010. The seller pays for the carriage of the goods up to the named place of destination but is not required to obtain insurance for the goods while in transit. Risk transfers to the buyer when the goods are handed over to the first carrier.

DAP (Delivered at Place) – rule for any mode of transport defined by Incoterms 2010. The seller covers all the costs of transport up to the agreed destination point. The buyer pays for necessary unloading cost at the final destination.

DAT (Delivered at Terminal) – rule for any mode of transport defined by Incoterms 2010. The seller delivers the goods, unloaded, at the named terminal. The seller covers all the costs of transport and assumes all risk until arrival at the destination port or terminal.

DDP (Delivered Duty Paid) – rule for any mode of transport defined by Incoterms 2010. The seller is responsible for delivering the goods to the named place in the country of the buyer and pays all costs in bringing the goods to the destination including import duties and taxes.

EXW (Ex Works) – rule for any mode of transport defined by Incoterms 2010. The seller makes the goods available at their premises or at another named place. The buyer covers the costs and assumes all risk for bringing the goods to their final destination.

FAS (Free Alongside Ship) – rule for sea and inland waterway transport defined by Incoterms 2010. The seller delivers the goods at the named port of shipment. The buyer bears all costs and risks from that moment.

FCA (Free Carrier) – rule for any mode of transport defined by Incoterms 2010. The seller delivers the goods to a carrier nominated by the buyer. The buyer covers all the costs of transit.

FCL (Full Container Load) – a term used in international sea freight transportation that means all goods in the container are owned by one party.

FOB (Free on Board) – rule for sea and inland waterway transport defined by Incoterms 2010. The seller bears all costs and risks up to the point the goods are loaded on board the vessel. The buyer covers the latter costs of transit.

Incoterms  – international commercial terms that clarify the rules and terms in international and domestic trade contracts. Incoterms define obligations, costs and risks involved in the delivery of goods from the seller to the buyer.

LCL (Less than Container Load) – a term used in international sea freight transportation that describes the transportation of small ocean freight shipments not requiring the full capacity of an ocean container.

Logistics – the management of the flow of things between the point of origin and the point of consumption in order to meet requirements of customers or corporations. It involves the integration of information flow, materials handling, production, packaging, inventory, transportation, warehousing and security.

Transit – the movement of goods (or people) from one place to another.

Warehouse logistics – all movements of goods and information within warehouses and distribution centers. It includes receiving, storage, order-picking, accumulation, sorting and shipping.

AQL (Acceptance Quality Limit) – an inspection standard that prescribes the range of the number of defective components that is considered acceptable during an inspection.

ISO 9001 – the standard that outlines the requirements an organization must maintain in their quality system.

RoHS (Restriction of Hazardous Substances Directive) – the European Union standard that restricts the use of hazardous materials in the manufacture of various types of electronic and electrical equipment.

TÜV – a company that provides inspection and product certification services. It issues certificates that are proof of tested safety and quality.

EORI number – a European Union registration and identification number for businesses that undertake the import or export of goods into or out of the EU.

MOQ (Minimum Order Quantity) – the lowest quantity of a certain product that a supplier is willing to sell.

ODM (Original Design Manufacturer) – a company that designs and manufactures a product, as specified, that is eventually rebranded by another firm for sale.

OEM (Original Equipment Manufacturer) – a company that produces parts and equipment that may be marketwe invite you to familiarize yourself with by another manufacturer.