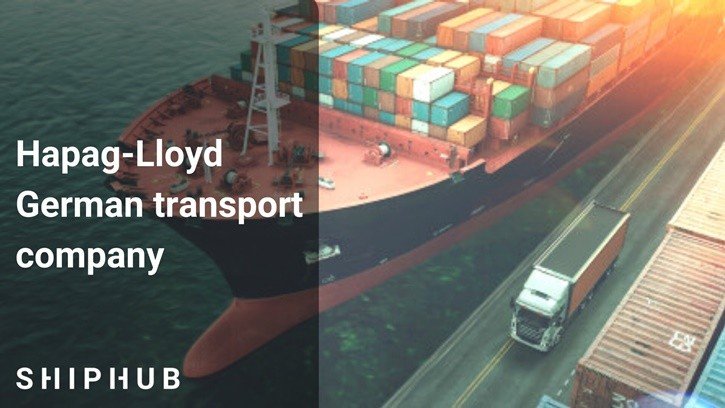 Hapag-Lloyd is a German transport company that is thriving internationally. It belongs to the leading ocean carriers for the trade of Transatlantic, Middle East, Latin, and North America. HAPAG is an abbreviation of Hamburg-Amerikanische Packetfahrt-Actien-Gesellschaft, which we can be translated as a transatlantic shipping company on the Hamburg-America line.

Hapag-Lloyd AG is the fifth largest container carrier in the world in terms of ship capacity. With 121 line services offered around the world, they provide fast and reliable connections between ports on all continents.

History of HAPAG and NGL companies before the merger

The company was founded in 1970 as a result of the merger of two German companies specializing in maritime transport – Hamburg-Amerikanische Packetfahrt-Actien-Gesellschaft, founded in 1847. and Norddeutscher Lloyd (NDL), which was founded in 1856.

Hapag is also known as the Hamburg America Line. It was founded in 1847 in Hamburg. It became the largest German and an international shipping company very quickly. It was serving the market initiated by German migration to the United States and later migration from Eastern Europe.

Hermann Henrich Meier and Eduard Crüsemann founded NDL (North German Lloyd) in Bremen in 1857. It became one of the most important German shipping companies in the late 19th and early 20th centuries and contributed to the economic development of Bremen and Bremerhaven.

Despite the first competition on the market between Hapag and NGL, both companies decided to start cooperation in 1968 by sharing huge investments related to containerization of their fleets. Finally, in September 1970, the two companies merged under the name Hapag-Lloyd.

In 1998, Hapag-Lloyd was taken over by the German tourism company TUI, and in 2002 became its subsidiary. After joining TUI, all tourism-related activities, such as charter airlines and travel agencies, were transferred to TUI AG.

In 2008, TUI announced its intention to sell its shares in Hapag-Lloyd before the end of the year. Industry speculation predicted a sales price of around 5.9 billion USD.

In 1972, Hapag-Lloyd founded the charter airline Hapag-Lloyd Flug and purchased several Boeings 727 to be able to transport passengers from Germany to ports. Later, the airlines also added regular passenger flights. In 2002, TUI created Hapag-Lloyd Express (HLX), a low-fare and high-frequency airline. However, this company was never owned by Hapag-Lloyd.

Since the merger in 2007, both airlines have been operating as TUIfly.

The dynamically developing company decided to introduce the Hapag-Lloyd 2023 strategy. It is aiming to become number one on the market by providing high-quality services, increasing profitability, and maintaining its position as a global player in the shipowners’ market.

Their establishment plan will become a model in the container transport industry, setting a quality standard, thus offering an unrivaled level of reliability and quality of service to customers.

Quality and environmental protection are an essential part of Hapag-Lloyd’s organizational culture. The sustainable development policy defines their commitment to protecting the environment, ensuring the highest quality of services, and taking care of employees’ health and safety.

Hapag-Lloyd has set up the Albert Ballin Prize to celebrate the centenary of the death of Albert Ballin, CEO of HAPAG and inventor of the concept of a cruise ship who died on November 9, 2018. The prize aims to appreciate global initiatives that foster networking and exchanges between nations and cultures, as well as those who advocate the victims of globalization. They also established two Albert Ballin awards for globalization studies. Young scientists and researchers will be rewarded for research that broadens and deepens our understanding of the possibilities and risks of globalization. Prizes will be awarded at regular four-year intervals.

In 1997, the Hapag-Lloyd Foundation was founded. It aims to promote culture, science, and social affairs, with particular emphasis on development among young people. The Foundation’s activities focus on cultural development, using media such as theater, ballet, music, and visits to museums. What is more, the company develops its owns projects. They want to promote new talents.