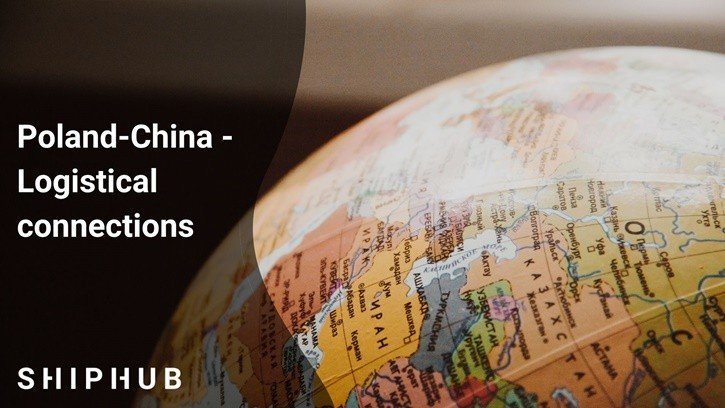 Poland has a strategic location in the center of continental Europe, neighboring with Russia, Lithuania, Belarus, Ukraine, Slovakia, Czechia and Germany. It comes as not a surprise that Poland is the transit country for the main transport corridors between Asia and Europe. Poland connects with China mainly by maritime, rail and road transport. Check Poland-China logistical connections.

Logistical connectins – a bit of background

Economics relation between China and Poland have revived after president Bronisław Komorowski signed a Strategic Partnership Agreement with China back in 2011. The next year Go China program was established to tighten the cooperation. To become a China-EU trade hub in terms of land and sea transport, Poland has been actively involved in global infrastructure Chinese project One Belt One Road (OBOR).

In December 2012, Chengdu-Łódź railway connection was launched. From that point onward, the city of Łódź has become a significant hub connecting the Chinese city with European countries. As one of the first such projects, it has significantly contributed to the Belt and Road Initiative. The line accounted for nearly 25% of the total volume of cargo operated between China and Europe in 2018.

The next cargo railway service between Poland and China was launched in October 2013. After 14 days of travel, the first train from China arrived in Warsaw. The railway connection was named SU-MENG-EU. The project was a result of the cooperation of Cargosped, Far East Land Bridge, Russian Railways Logistics, as well as partners from China, Russia and Belarus.

On November 21, 2019, DCT Gdańsk launched the first permanent railway connection of the Euro China Train. The train regularly arrives from Xi’an in China via the Adampol Małaszewicze land terminal to the DCT maritime container terminal in the Port of Gdańsk. It runs on a route via Kazakhstan, Russia, Belarus and the Brest/Małaszewicze border crossing. The cargo reaches the Małaszewicze terminal from China in 10 days. Every day about 19 trains from all major Chinese land terminals pass through Małaszewicze. The city handles about 90% of the railway cargo between China and Europe.

Finally, on December 24, 2019, a new direct freight train was launched. It connects Xi’an inland port to the Polish intermodal hub Euroterminal Sławków. The train crosses Kazakhstan, Russia and Ukraine, and runs on a distance of almost 9500 km long. The containers are transshipped only at the border between China and Kazakhstan. The Euroterminal is also connected to the Port of Gdańsk. Once the train arrives, the containers can be either loaded on lorries or transshipped to flat wagons and be departed to the Port of Gdańsk. Predicted travel time is 10-12 days.

Cargo from the east coast of China to Western Europe is shipped by the sea in about 35-40 days. Polish seaports are linking Scandinavia with South-Eastern Europe.

The coastal city of Gdańsk has been regarded as having the potential to be transformed into a logistics hub. Port of Gdańsk has multiple deep-sea lines to China, namely Tianjin-Xingang, Qingdao, Shanghai, Ningbo-Zhoushan, Xiamen and Shenzhen-Yantian, and Hong Kong. They are provided by two largest shipping alliances – 2M and THE Alliance. The vessels ship out weekly.

Gdańsk has planned an ambitious project for 2020. It aims to reach 2,350,000 TEUs, which will be a 10% increase in comparison to 2019. Considering the road and rail infrastructure is linked to the Port and improved continuously, the goal can be reached. Aside from that, the Port plans to modernize most of the quays in the Internal Port, resulting in the capability to service bigger vessels.

Port of Gdynia Authority also does not slack. Together with the government in Chinese Weifang in 2019, it signed a letter of intent to increase cargo flow between the two ports. Overall, the amount of container shipping volume between China and Poland has increased over the years. It is expected to do so in the future.

When it comes to road transport, Poland has also expanded its connections with China. In November 2018, the first TIR truck transport from China to Europe successfully ran its 7,000 km journey. It entered Kazakhstan at the Khorgos border, traveling via Russia and Belarus to Poland in just 13 days. The run time and the cost are competitive with both air and rail transport. From April 2019 onward, the cargo has been shipped regularly between China and Europe.

With an aim for expanding e-commerce in Europe, Chinese enterprises are interested in Poland’s logistics connections. Thus, it is anticipated that Chinese investment in logistics services in Poland will grow in the future.