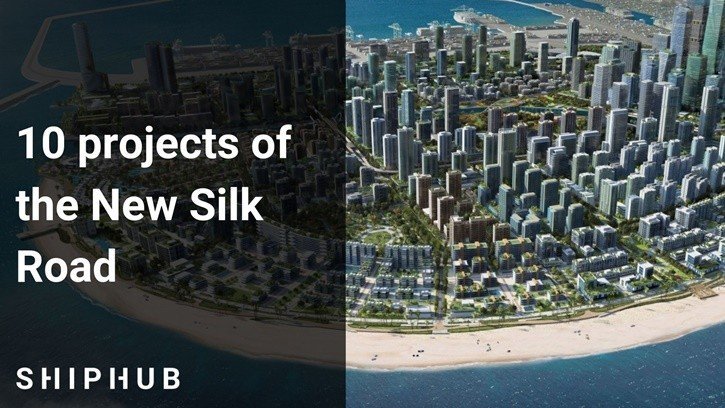 The New Silk Road is a concept proposed by President Xi Jinping in 2013. It is a large-scale investment project involving 125 countries and 29 international organizations. These investments aim to create infrastructure for a network of land routes connecting China with Central Asia and Europe, as well as a network of maritime routes connecting China with the Middle East and Africa. It is worth mentioning that several significant investments are taking place in various countries cooperating with China under the Belt&Road Initiative. Check out projects of the New Silk Road.

The project was signed in 2015. It aims is to create a high-speed railway infrastructure to connect the capital of Indonesia with the city of Bandung. The length of the tracks may not be impressive, but the mountainous terrain hinders it. Thirteen tunnels have to be drilled. The main tunnel will have 1885 meters, and it is located in Halim. Seven out of thirteen tunnels are already in the process of being drilled. What is more, the train is supposed to reach a speed of 350 kilometers per hour. The train should cover the road in 45 minutes. In the project, China Railway Corporation cooperates with the Indonesian state-owned company PT Wijaya Karya Tbk. The project is financed mainly by the China Development Bank.

This line is connecting two important cities of Nigeria. The project was launched in 2011 and inaugurated on 26 July 2016. That means the project precedes the official announcement of the New Belt & Road Initiative. The project was carried out by the Chinese company China Civil and Engineering. Additionally, the investment has successfully adopted Chinese railway standards. The line is 186,5 kilometers.

Sri Lanka for long has been planning a harbor city, which could compete with Hong Kong, Dubai, or Singapore. The project was launched in 2014 by Xi Jinping and Sri Lanka’s President Mahinda Rajapaksa. Mainly, the constructions consist of enlarging the shore using sand poured into the ocean. The size of this area is to be 269 ha. China Communication Construction Co Ltd. is in charge of the building. The budget is estimated at 1. 5 billion USD. It is also expected that the new facility will provide work for 83,000 inhabitants within 20 years.

Another investment under New Belt & Road Initiative. The port is divided into three docks, two of which have been leased to China Ocean Shipping (Group) Company for 35 years since 2009. Annually, they pay to Greece 100 million euro. Besides, COSCO is to invest 290 million euro in the expansion of the passenger ship terminal, the ship repair quays and the ro-ro quays for cargo-passenger ships. Thanks to Chinese investments, the port of Piraeus has become much more efficient. In 2009, the port handled 1. 5 million containers, and in 2017 the number grew to 3. 692 million.

The Temburong Bridge is a 30 km long structure which connects continental Brunei with the Temburong area, which is an exclave. This is the largest infrastructure in Brunei. China State Construction Engineering Corp. is responsible for the construction. The car traffic is expected to start on November 2019. The building is not entirely a bridge. A part of it will be a viaduct made from ground to facilitate the construction of the structure and increase its safety. The price of the project is estimated at 1. 6 billion Brunei dollars.

The bridge over one of the main rivers of Bangladesh, the Padma, is to be 25 meters wide and 10 kilometers long. China Railway Major Bridge Engineering Group Co Ltd. is responsible for this project. The company signed a contract in 2016 with the government of Bangladesh for 1. 55 billion USA for building bridge skeleton. Thanks to this bridge, the journey from Dhaki (capital city) to Khulna city will be reduced from 13 hours to only 3.

The 32 turbine wind power plant is the first Chinese wind energy in a South American country. China State Power Investment Corporation manufactured the power plant at the cost of 150 million USD. The plant is capable of producing 282-gigawatt hours per year, which meets the electricity demand of around 13,000,000 households. Besides, it contributes to the reduction of carbon dioxide emissions to the atmosphere.

It is a power plant that extracts liquid gas. The total investment cost is 27 billion USD. The power plant consists of three production lines, which were successively commissioned in 2017, in mid-2018 and at the end of 2018. The Russian company, Novatek in 51,1%, owns the facility. Total S. A. and The China National Petroleum Corporation (CNPC) each own 20%, and the Silk Road Fund owns 9. 9%. The largest importer of liquid gas is to be China, to which this product will be delivered by sea.

It is supposed to be a special economic zone located 25 km from Minsk. It will be established based on the Chinese and Belarusian agreement. It is to cover an area of 95.1 square kilometers. The plan assumes a focus on high-tech products and exports. The costs of the park’s investment are distributed between the two countries. Chinese side paying 1.5 billion USD and the Belarusian side 500 million USD, which means that 60% of the shares belong to China and 40% to Belarus. The park is supposed to encourage foreign investors to invest. By February 2019, 43 companies had already signed contracts.

The zone supposed to be a connection with other African countries. The investment is worth 3. 5 billion USD. The facility was built with the financial support of China Merchants Group and Dalian Port Authority. The area covers 4800 ha. The whole investment is to provide 200,000 jobs. Together with this free trade area, a railway network has been built to connect it to Addis Ababa. The project was completed in 2016.

This is how 10 projects of the New Silk Road look like.