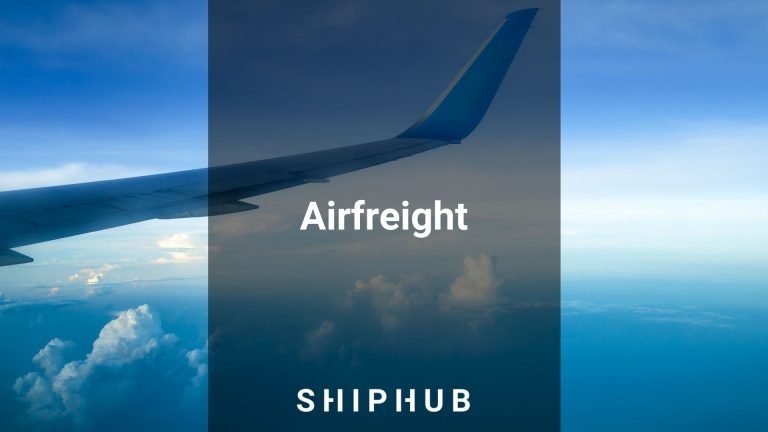 One of the key elements of import and export is the transport of cargo to its destination. When transporting goods from distant countries, e.g. East Asian ones, you can choose air, sea, or rail freight. In this article, we present airfreight – definitely the fastest, but also the most costly of the above mentioned.

Airfreight is the most modern and dynamic branch of transport that enables to carry the cargo in the shortest time possible. Due to the specificity of this type of transport, it is used primarily for the carriage of perishable, valuable, or urgently needed goods.

One feature that distinguishes airfreight from other means of transport is the transit time – cargo transportation from China to Europe can take from 3 up to around 7 days depending on the selected service, with an average of 5 working days. In comparison, sea transport would take around a month in this case. However, the time savings are followed by relatively high costs, which will be discussed further in the article.

Each year several tens of millions of tons of cargo are transported by air. At any moment there are from 8 to 20 thousand passengers and cargo aircraft over the globe (depending on the season and time of the day). To picture the scale of air transport development, you can take a look at the live map of various types of aircraft location by Flightradar24.

In most cases, air transport is entrusted to an independent forwarding company. That being said, it is worth knowing what steps are included in the transportation process:

There are different types of airfreight depending on the way it is organized:

Some other categories refer to the type of cargo:

Advantages and disadvantages of airfreight

Before you decide to use airfreight, it is good to realize the advantages and disadvantages of this type of transport and then make a decision based on your own situation. The strengths of air transport include:

The disadvantages of airfreight, in turn, include:

The cost of airfreight is usually calculated based on tariff and cargo weight. One exception is a situation in which the cargo is of non-standard dimensions and the volume-to-weight ratio is high – in such a case the volumetric weight will be taken into account. It can be calculated in different ways by various carriers, as the volume in cubic centimeters divided by 5000 or volume in CBM multiplied by 167. It is therefore usually more profitable to ship more “dense” consignments by air.

Below we present exemplary airfreight rates:

It should be noted that covering the cost of transit is not all. Besides, you still have to pay the customs duty and VAT, which are calculated as a percentage of the sum of the cost of goods + cost of delivery. This means that the tax will be higher in the case of expensive delivery. That is why transporting goods of low monetary value by air may turn out to be uneconomic.

It is also worth verifying what constitutes the price of carriage offered by the forwarder. It often does not include additional costs, such as the fuel surcharge, which you will be obliged to cover.

Only four out of the 20 busiest airports in the world (according to cargo traffic expressed in tons) are European. The Hong Kong International Airport has consistently been ranked on the top of the list for 10 years. Below we present the 5 busiest cargo airports in the world:

Strategic airports located in Europe are:

Transport of goods is closely related to Incoterms, i.e. the International Commercial Terms. These define the scope of responsibility, division of costs and obligations between the buyer and the seller. Experienced entrepreneurs sometimes decide on solutions that place most of the responsibility on themselves, but at the same time help reduce costs.

When it comes to airfreight, the following Incoterms may apply:

Proper cargo packaging is essential for its economic and safe delivery. First of all, the elements inside the box must be packed as tightly as possible using various types of void fill, e.g. polystyrene or bubble wrap. This will prevent the elements from bumping against each other, and you will avoid overpaying for carrying empty space.

Air transport cargo can be arranged in the form of single parcels or pallets, however, the latter may incur additional costs.

The list of goods subject to restrictions in air transportation is quite long due to its specificity. Depending on the choice of airline and type of cargo, those items are either categorically prohibited for carriage or require the carrier’s consent and special safety measures. In case your cargo falls under one of the following categories, you may consider sending it by sea.

The most common restricted items are for example:

During the customs clearance (both in the country of origin and destination) specific documents will be necessary. The most important ones are:

Optionally, you may have to provide:

All these documents are prepared by the freight forwarder and/or the seller.

The importer is obliged to settle tax and customs duties. As we have already mentioned, both customs duty and VAT are calculated as an adequate percentage of the total value of goods and delivery.

Many importers and exporters decide to choose professional forwarding services, which is a result of the difficulty of overseeing the whole process that takes place thousands of kilometers away. A forwarding company plans and organizes the entire logistic process, including booking space on a given flight and handling the documentation. You can compare the offers of various forwarding companies using Shiphub.co.