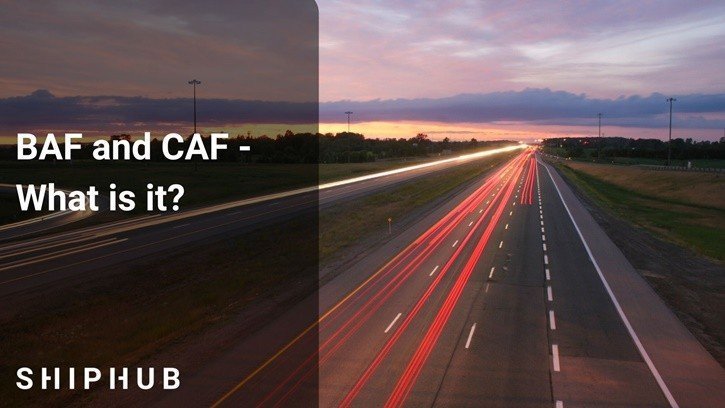 Abbreviations appearing on the valuation of cargo transport may confuse many importers. These are so-called freight additions, i.e., additional fees charged by forwarding companies to offset various variable costs incurred by them during the transport process. In the case of BAF and CAF, oil price fluctuations and currency fluctuations are compensated. It is worth familiarizing yourself with the mechanisms for calculating these fees to understand better where the final price of transport on our bill comes from.

BAF is an abbreviation of the Bunker Adjustment Factor. This is a fuel correction, i.e., an automatic mechanism correcting transport rates as a result of changes in fuel prices. These prices constitute a significant percentage of the total cost of transporting goods. Therefore, to save constant changes in the price lists of transport services, shipping companies automatically add the appropriate percentage of fuel additive to the base rates.

Each company calculates BAF slightly differently. Freight forwarders also reserve the right to change the calculation methodology without prior notification of such changes.

The indicator increases or decreases based on changes in market prices of fuel. It is usually calculated based on the average wholesale price of 1 m³ of diesel oil from the previous month, published by PKN Orlen. The frequency of updating the rate varies between entrepreneurs; most often, they are weekly or monthly intervals.

For example, one company X calculates the percentage difference between the adopted base fuel price and the current price. Starting from a 5% difference upwards, for each multiple of 5% of the difference, the fuel gauge value is added, which is, e.g., 1.5%. In this way, with a fuel price increase of 11% compared to the base price, the BAF value will be 3%, and with a 7% increase, the BAF will be only 1.5%. There are also negative values, and then the BAF value is subtracted from the price.

Behind this abbreviation is the Currency Adjustment Factor, which is a variable currency supplement. Forwarders introduce it to control losses or profits resulting from currency fluctuations. It partially covers the costs incurred by the freight forwarder in settling accounts with other transport market entities using different currencies.

As with BAF, each company calculates the allowance according to its methodology and reserves the right to change it. This value is determined once in a while, usually once a month. It may be negative, and then the freight rate will be helped.

As in the case of BAF, the company chooses a base rate (it can be, for example, the average exchange rates from several previous months). Based on the difference between the current and the base rate, based on individually selected factors, it receives the CAF value for a given period.

What are BAF and CAF?

BAF and CAF are therefore significant additions to prices for transport services. Thanks to the analysis of their calculation by a given company, it is easy to find out where the real price rates come from.