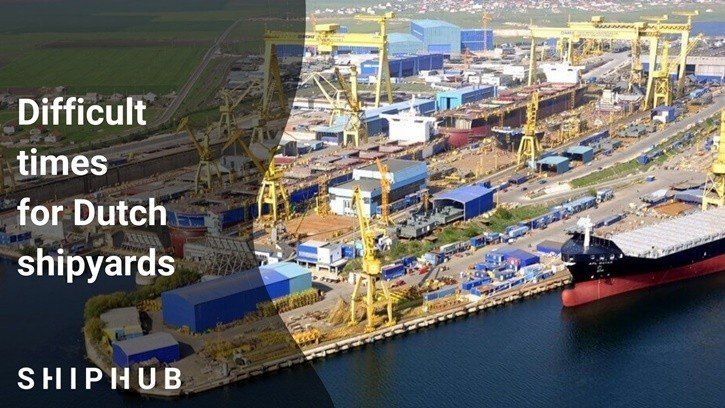 Recently, we have written about lowered rates in Chinese shipyards on ships, as the shipbuilders struggle to stay in business. This time, the Dutch shipyards are going through hard times. Two private shipyard groups from the Netherlands have suffered the biggest losses for many years – Damen and Royal IHC.

Damen Shipyard Group owns over 30 yards around the world, and most of them focus on renovations and repair activities. Its problems with liquidity began in 2018 when net losses reached 17 million euros. In 2019, the shipyard group recorded a loss of over 280 million euros, which is its greatest loss in 93 years. The shipyard’s problems are mainly due to the difficult conditions in the offshore sector, as many contacts were not profitable. To bounce back, CEO Arnout Damen plans to return to series building and standardization, on which Damen’s power grew.

Damen shipbuilding group awaits changes. It should go with the times and implement the idea of sustainable development and digitization. The organizational structure of the enterprise has already been changed, as it was reduced by some units. For instance, Amels, SeaXplorer, and Yacht Support merged into Damen Yachting.

Royal IHC has 39 yards and offices all over the globe. Even though the group is not short of orders, it is struggling with financial problems. It lost on numerous contracts for the construction of large ships, and as a result, fell into debt. In 2018, IHC reported losses of over 80 million euro, which even increased in 2019. There were rumors that the group could have passed into the Chinese hands.

To keep the group Dutch, it received support from the state, for example, in the form of a financial guarantee. The Dutch government co-financed Royal IHC for around 400 million euros. Also, it was taken over by a consortium. The consortium consists of a Belgian investment company Ackermans & van Haaren, a Luxembourg investment company HAL Investments, a Dutch offshore crane manufacturer Huisman and a ship operator Van Oord. There was also a change in management – Dave Vander Heyde resigned as CEO and was temporarily replaced by Gerben Eggink. Those measures were taken to strengthen the innovative strength of the shipbuilding group and to maintain its leading position in the maritime sector, built up for centuries.