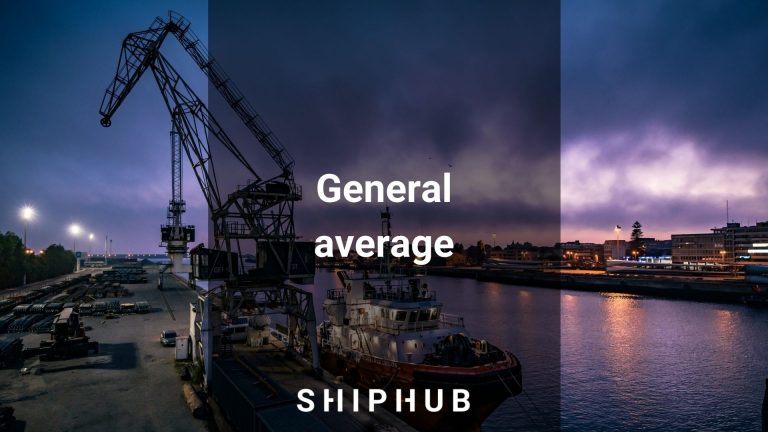 Maritime accidents are unforeseen. If such an accident occurs, shipowners may declare a general average. Many beginner traders are unfamiliar with this term and the consequences. In this article, we present the most important information about the general average and some solutions that can help minimize the losses if it happens to your containers.

General average – what is it, and when does it occur?

The concept of “general average” was used a thousand years ago. The general average is any extraordinary sacrifice or expenditure that is intentionally and reasonably made or incurred for the common safety for the purpose of preserving from peril the property involved in a common maritime adventure (York-Antwerp Rules). Losses in terms of general average are those which are direct consequences of its occurrence. Other losses are not taken into account.

General average is declared in case of, for example, extinguishing fire on shipboard, jettison of cargo, or damage to machinery and boiler.

Who is charged in the event of a general average?

All partners in a maritime undertaking should proportionately bear losses and expenses when a general average is declared.

The claim of the general average is adjusted by an average adjuster. The whole process of settlement is very complicated, so it takes quite some time. It can even take several years to settle the damage fully.

General average bond – what is it?

In addition, cargo owners are obliged to provide financial security by determining an appropriate percentage of the value of the goods and the cost of sea freight.

The ship ran aground and became lodged. Since the rescue operation was carried out, tugboats managed to pull the ship out. The rescue operation cost 6 million. The ship is valued at 40 million, the cargo – 50 million, the freight – 10 million. 6 million was spent to save 100 million, so the general average value is 6%. If someone had a total of 12 million worth of cargo abroad the vessel, such person would be charged 6% of 12 million, 720 thousand.

The value of the entire ship is 40 million, cargo – 50 million, freight – 10 million. The ship made a dangerous turn and was about to capsize. The captain decided to sacrifice some cargo, so a 5 million worth of cargo was thrown overboard. Costs are divided to all participants, and every participant must contribute 5%. The owner of the jettisoned cargo also contributes 5% of the amount due out of 5 million (250 thousand) but should get reimbursed 475 thousand.

The risk in maritime transport

The greatest risk of a maritime accident is that the costs of participation may be equal to 100% of the value of the cargo. As the process of claiming a general average is complex, cargo may also have been stuck in port.

How to avoid the consequences of a maritime accident?

In order to minimalize the risks of losses, you should buy cargo insurance.

Many cargo insurance policies offer insurance in a variety of circumstances (explosion, fire, flooding), robbery, damage, and general average. The cargo policy often insures cargo from the place of loading to the place of delivery, and various insurance policies can be expanded with additional options. Even the total value of the goods can be recompensated.

You can purchase another insurance which is the carrier liability insurance, but it only protects the carrier, not the cargo. It does not take the general average into account.

The sea is unpredictable, and man-made disasters also occur. Even though the cargo may not be taken into account in terms of general average in every case, it is “better to be safe than sorry” and purchase cargo insurance. It will ease your worries of potential losses, and even if you have to sacrifice something, you will be reimbursed.