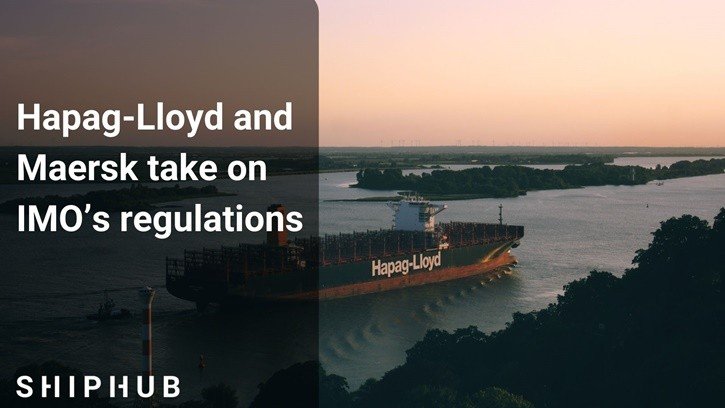 From January 1st  2020, vessels are only allowed to use fuel with a maximum sulfur content of 0.5%. In addition, the International Maritime Organization (IMO) has settled a target of 40% emissions reduction by 2030. Hapag-Lloyd and Maersk are close to reaching the goal ahead of time. Check how Hapag-Lloyd and Maersk take on IMO’s regulations.

Before 2020 came around, shippers and carriers were worried about rising prices due to the additional costs of sourcing and switching vessels over to low-sulfur fuels. They could not have foreseen the global pandemic, which has even compounded the costs. But the game is worth playing, as the new regulations are to improve the ecological footprint of the shipping industry significantly. Furthermore, studies show consumers prefer environmentally friendly companies and shipping options.

According to Hapag-Lloyd’s report, ninety-five percent of its vessels now run on low-sulfur fuel, which emits more than 70% fewer sulfur oxides than the fuel previously in use. The carrier to adjust to the IMO’s 2020 regulations implemented an IMO2020 Transition Charge (ITC) for short-term contracts (up to three months). Next, the carrier plans to transition from low sulfur to LNG or biofuels, as those fuels are more sustainable options. The IMO 2020-compliant fuel is more expensive than regular fuel, so to meet the regulations, Maersk has also implemented a separate fee called the Bunker Adjustment Factor for long-term contracts over three months.

As it comes to IMO’s initial strategy on the reduction of greenhouse gases, emissions have to be cut off at least 40% from 2008’s levels per transport work by 2030. Overall, the maritime industry is to cut at least 50% of its greenhouse gas emissions. It was reported that Hapag-Lloyd ​had reduced emissions by 50% – by 40.22 grams per TEU-kilometer, and Maersk by 41.8%, compared to the 2008’s levels. The carriers set an example, how companies should correspond to the IMO’s new regulations.