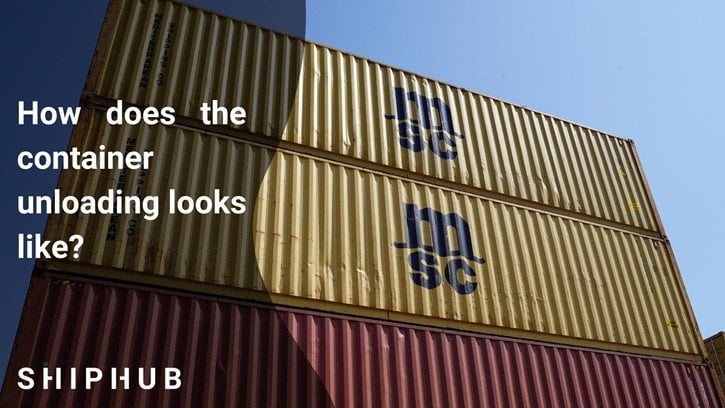 Every year, tonnes of cargo arrive at seaports. Current technology and engineering guarantee efficient and effective logistics. Many functions used for unloading the container at the port have been automated. In the article below, we will try to explain exactly how the container unloading in port looks like.

Each port performs such basic functions as:

In this article, we focus mainly on container unloading.

The definition of unloading is as follows:

Unloading is placing the appropriate container on a ship, chassis, wagon, or any other means of transport.

When the ship arrives at the port, the containers should be unloaded. This is usually done with the help of special container cranes. In the photo below, you can see how such a crane looks like.

These types of cranes pick up containers from the ship’s cargo hold and deck.

Then the containers are placed on the vehicles.

AGVs (automated guided vehicles) can also be used to transport containers. These types of vehicles move without the participation of drivers. They are run by PLC controllers (programmable logic controller) for mobile applications. After receiving the container, AGV moves the container to the previously selected stack. The stack consists of several lines between which containers can be stored for a limited time.

When the AGV arrives near the sensor-rich line, the ASC pulls the container and places it on a certain stack. When necessary, after a certain time the containers are again picked up by ASC and transported by AGV for further means of transport (e.g., barges, trucks or trains).

A similar process, but in reverse order, also occurs when loading a container onto a ship.

The procedure of placing containers on appropriate stacks is to facilitate operations taking place in specific parts of the quay and the public area during unloading of ships and subsequent reloading.

The video attached below shows exactly how the container unloading looks like in the port on the example of the BCT terminal in Gdynia.

We also encourage you to read articles describing ports in the world:

The largest ports in India – TOP 7

Seaports in the world – TOP 20

The largest ports in Europe