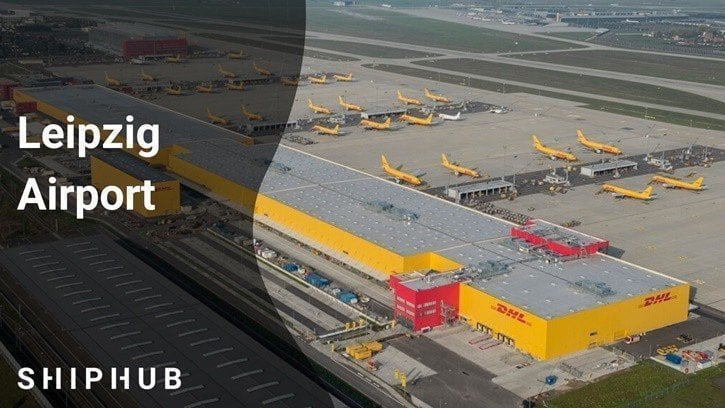 Leipzig /Halle Airport is located in Schkeuditz, Germany. It is Europe’s fifth-largest cargo hub and the largest airport in Saxony.

The airport was opened in 1927. In 2008, DHL established there its freight hub. Hence, the cargo capacity had increased threefold. Leipzig bid to host the 2012 Olympic Games; therefore, the airport was modernized in anticipation of increased passenger traffic. But eventually, London was chosen to be the host. In 2016, DHL inaugurated the opening of two new cargo terminals. Thus, the airport’s handling capacity increased by 50%.

The airport is identified by the IATA airport code LEJ. Airlines operate flights in several dozen directions. In 2019, the number of passengers reached over 2.6 million. The airport has two parallel runways: 3,600 m x 45 m and 3,600 m x 60 m.

The airport is the second-largest cargo airport in Germany, placing behind Frankfurt airport. Leipzig/Halle Airport is the main European hub for DHL Aviation and the base airport of AeroLogic, a joint venture between Lufthansa Cargo and DHL Express. There are over 50 cargo airlines operating flights to over 200 destinations around the world. In 2019, the airport handled 1,238,343 metric tons of cargo. In 12 years, the annual volume increased tenfold.

Thanks to the high service standards, high-performance infrastructure, and individual solutions, the airport guarantees professional handling around the clock and rapid turnaround times for general and special cargo, e-commerce, and express freight. The Leipzig airfreight hub has a World Cargo Center with an area of ​​20,000 m². The airport is designed to transport animals and has received CEIV Pharma certification. It enables to transport medicine and sensitive pharmaceutical goods.

In the coming years, the airport will be expanded; for example, it will gain a second Cargo City. The planned investments will total about €500 million. The airport operator, Mitteldeutsche Flughafen, will handle the investment.