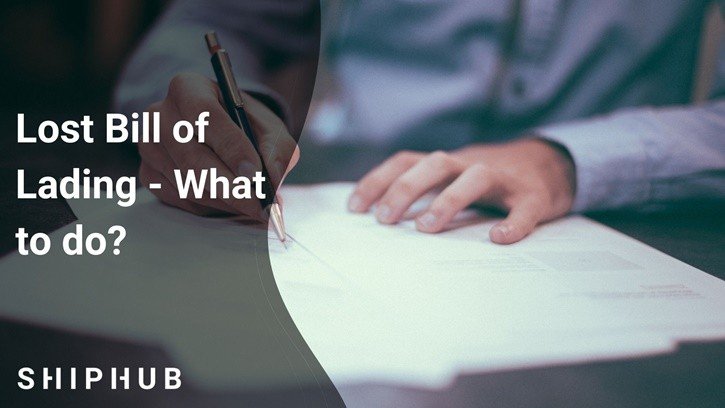 A Bill of Lading is a transport document, which is an important document needed for transport. However, because numerous ships arrive at ports, it happens that the bill of lading is lost, damaged, or disappeared in another way. So the question is what to do in case of losing a bill of lading? In the article below, we will try to answer this bothering question.

What is the Bill of Lading?

Bill of Lading (BOL or B/L) is a transport document, based on which the carrier is obliged to deliver cargo in a designated place.

The Bill of Lading is also proof of the conclusion of the contract before transferring the lading to the captain.

Most often, the transport company issues three Bills of Lading. In some cases (depending on the carrier), it is possible to release cargo based on one copy. However, currently, to release lading, it is required to show a transport document or a signed Telex Release with a stamp.

When the Bill of Lading is issued as a bearer document, most carriers require to deliver three original documents.

Losing a Bill of Lading can be a big problem because of the sea carrier hand out the container on its basis. Lack of this document may contribute to the situation in which we will not be able to collect the ordered goods.

If containers remain in the port for too long, a downtime or demurrage fees might be charged.

What to do in case of losing your Bill of Lading?

Losing original Bills of Lading requires to take additional and complicated steps by the shipper, exporter or importer.

The easiest way is to find Bills of Lading. Supposing that the courier company has lost the waybill, you must contact the company immediately and request to find it. Usually, it is possible to find such a document later. However, please remember to notify the forwarder of this situation.

When the courier company is not at fault, please contact the carrier and determine which documents will be needed fo the cargo delivery. They are usually collateral or long-term bank guarantees. The shipper, exporter, or importer must forward these documents to the carrier, shipowner, or freight forwarder for the release of the goods. The original Bill of Lading will then not be needed. In some cases, an appropriate fee may be required.

The submitted documents will provide security for the carrier in case of arriving the person with the original Bill of Lading.

If you lose your Bill of Lading, it will be a good idea to prepare and obtain the following documents:

Duplicate of the transport document

It should be remembered that in the case of a Sea Waybill, the duplicate procedure is not used, because it is a non-transferable document.

In the situation where the shipper trusts the carrier or has already paid charges for the goods, instead of a Bill of Lading, he may ask for a SeaWayBill or Express Bill of Lading document.

Bill of Lading is a document, which does not have to be printed on paper in the originals, sent, and deposited with the carrier at the port of destination. It may appear in an electronic version or as a PDF file.

Telex Release has a similar usage. When all charges from the recipient have been paid, the shipper informs the carrier of the need to contact the office at the container destination and hand over container or goods to the recipient based on his instructions.