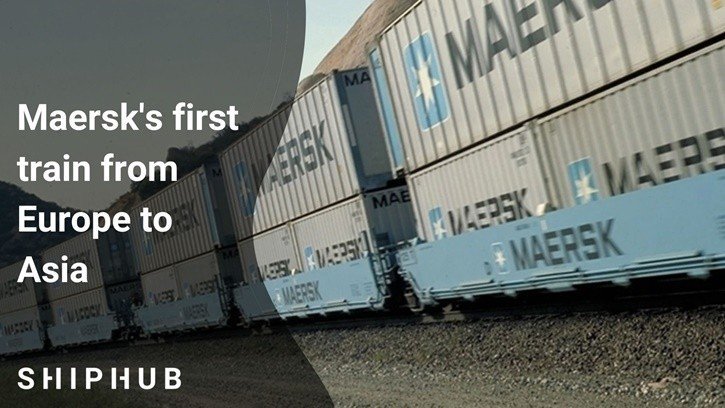 On March 28, 2020, the first intercontinental train was dispatched from St. Petersburg port to Asia. The cargo will reach the ports in South Korea and Japan within 23 to 32 days, saving up to 34 days in comparison with a traditional ocean route. This is the first eastbound transcontinental train and a strong competitor among other transport solutions on the market. Read more about Maersk’s first train from Europe to Asia.

On the Maersk AE19 service, the goods are transported from the FCT port terminal in St. Petersburg to the terminal VSC in the port of Vostochniy in the Russian Far East. Then, the goods will be loaded on Maersk’s vessels for delivery to Japan and South Korea. The first train is loaded with chemical products and plywood.

The AE19 service was launched in August 2019, as part of the cooperation of the Danish shipping giant with the Russian partners Modul and Global Ports. The goal is to offer a better solution to transport more sensitive cargoes between the ports of St. Petersburg and Vostochniy. The AE19 service also includes sea transport from St. Petersburg to the Scandinavian countries and Eastern Europe. It is worth mentioning that the first sea transport under AE19 was launched for the Polish market, transporting cargo from Busan, South Korea.

Maersk offers a much economical solution than air transport, offering rates lower even by 1/3. An additional advantage is that railway transport is environmentally friendly. Moreover, Maersk has decades of experience in handling and shipping dangerous goods. For urgent orders, the shipowner has the option to change ocean orders to AE19.

For a long time, the AE19 service was used for shipments transported from Asia to Europe, but as demand arose, Maersk began to send shipments in the opposite direction. Customers mainly within the technology, chemical, automotive, and industrial verticals, employ the service.

The next shipment on AE19 will be dispatched from St. Petersburg on April 9. After that, shipments will be provided every two weeks.