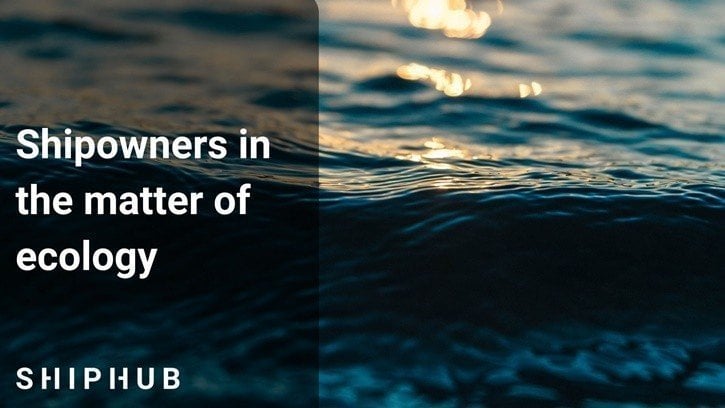 The issue of caring for the environment has recently become particularly important. Shipowners have the slogan ‘environmentally aware company.’ More and more carriers are implementing technologies to prevent pollution. There are more ideas are of reducing carbon emissions and increasing the importance of recycling. In the following article, you will read about how world shipowners are committed to environmental protection.

Shipowners in the matter of ecology – Outline of the situation

More and more companies attach great importance to the risk of climate change, including shipowners.

The year 2020 will bring further changes in regulations regarding the sulfur content of ship fuels. Currently, the level of sulfur compounds in the exhaust gases of ships is 3500 times higher than those that produce cars. The new regulations are to reduce CO2 emissions in shipping by as much as 85% compared to the current state.

There are also ideas for creating zero-emission and autonomous container ships, but the plan is quiet distant for now.

For the environment, reducing sulfur compounds in marine fuels is a big advantage, but shipowners will have to bear huge costs.

According to Maersk, the use of low sulfur fuels will increase ship operating costs by approximately 2 billion dollars. Hapag-Lloyd estimates the increase in fuel bills at around 1 billion dollars. The financial burden can be transferred to the customers. From 2020, the cost of transporting a 20′ container from Asia to Europe is likely to increase by up to 400 dollars.

Currently, many shipowners are investing in equipping their fleet with the so-called Exhaust Gas Cleaning System (EGCS). They are commonly called scrubbers (they leach heavy sulfur compounds from fuel to reduce their emissions to the atmosphere).

Having a scrubber on the board of the ship means that they can use cheap high-sulfur fuels, and the reduction of sulfur compounds (to the level required by IMO) takes place in the process of exhaust gas purification.

However, it is estimated that by 2020 only 2-3% of the world fleet will be equipped with scrubbers.

LNG (liquid natural gas) is primarily the future of the marine fuel market. Currently, however, there are only 125 LNG-powered ships in the world.

According to DNV GL, by 2050, 47% of the world’s ships will use oil-based fuels, 1/3 of the world’s fleet will use LNG, while the rest will use alternative energy sources, i.e., biofuels, methanol, hydrogen or energy power.

The Shell station announces the launch of an LNG bunkering station at the main bunkering center for vessels entering the Mediterranean – Gibraltar. A similar station is also to be built in Malta.

There are currently 67 LNG bunkering centers around the world, 26 are planned, while a further 38 are under discussion.

Shipowners in the matter of ecology

The Danish company has been transporting goods around the world for many years. Now they want to initiate a new period of CO2-free transportation.

Maersk takes the topic of environmental protection very seriously. Already this year, the company has significantly reduced carbon dioxide emissions, and their main goal is to reduce it by 60% by 2030. By 2050, the company intends to achieve carbon neutrality.

There are no solutions yet, but scientists are already working on it. Maersk’s management announced that they want to accelerate the development of this type of technology.

The company is already trying to use biofuels in as many container vessels as possible.

Experts from the EcoVadis agency have honored the French shipowners with the Global Regonition Level certificate.

The shipowner was recognized primarily for achieving a 50% reduction in carbon emission in 2015, supporting needy children through their foundation and safety on ships.

CMA CGM significantly improved the emission efficiency of its ships by 50% and plans to raise this level by another 30% by 2025.

Hapag-Lloyd focuses on recycling and ecology

In 2018, Hapag-Lloyd received the “DNV GL Excellence Green Star” certificate, which is awarded for a high standard of recycling.

The shipowner Hapag-Lloyd undertakes cooperation only with shipyards that dispose of scrap metal from ships, operating in accordance with the latest ISO 14001 standards and the terms of the Hong Kong Convention. The carrier additionally supervises recycling processes so that they comply with the new European Union standards.