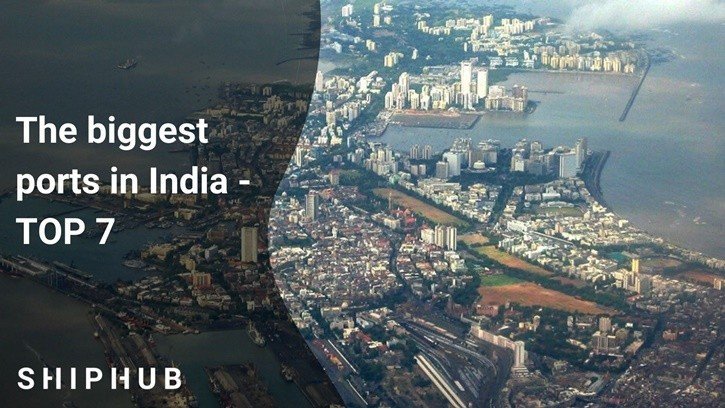 95% of India’s foreign trade is mainly via seaports. There are twelve main seaports in the country, and 187 reported small and medium ports. In the following article, we present the largest ports in India.

Jawaharlal Nehru Port is the largest container port in India. It also belongs to the TOP 50 largest ports in the world (27th place). It is also referred to as JNPT and Nhava Sheva. It was established on the 26th of May 1989. The port handles 55% of container loads in the country, thus exceeding 4 million TEU.

A target of 10 million TEU by 2020-2021 has been set through the construction of two more terminals. Besides, inland communications (including railways) are continually being upgraded.

Mumbai Port is one of the largest port in western India. It is a natural, deep-sea port that covers an area of 400 km2. The first dock was built in 1870, and the entire harbor was established as a company in 1873.

From the moment of establishment, the port was the so-called “Gateway to India.” It played significant aIt role in expanding the country’s economy. It has three closed wet docks: Victoria Dock, Prince’s Dock and Indira Dock.

The port became the first container terminal in India, which handled over 2 million TEU per year.

In the port, there are companies such as COSCO, CMA / CGM, Evergreen, Hapag Lloyd, Hyundai, MSC, or UASC.

The estimated delivery time from the Mumbai port to Gdynia is about 31 days.

The main cargo is clothing, manganese ore, jute, and indigo.

The port is continually being modernized to facilitate international trade.

The Kochin Port is a fast-growing logistics center which is slowly becoming a significant international transshipment terminal. It is the main seaport located on the southwestern coast of India (Arab Sea and the Laccadive Sea). Kochin is located on two islands: Willingdon Island and Vallarpadam. It was established in 1928.

In 2016 the port transshipped over 400 thousand TEU of cargo.

The entrance to the port is 10,000 meters long and 200 wide. The depth of the port is 13. 5 meters. The inner bay is divided into two navigation channels: the Ernakulum Canal and the Mattancheri Canal.

Port of Kolkata is a river port, which is located 203 kilometers from the sea. It is the oldest operating port in India – it was founded in 1870 by the British East India Company.

Despite its location, the port is the best choice for transport to the mainland. It is known for the largest dry harbor in India, the lowest container handling rate in Haldia, the lowest cost of vessel downtime in the Kolkata Docks System and the most modern vessel traffic management system.

The port has two systems – the Dock Kolkata (dock system in Calcutta from the oil quays in Baj Baj) and the Dock Haldia (complex system in Haldia).

Kolkata supports 17. 1% of all ships that sail into Indian ports. In 2017, the port handled over 7 million TEU of cargo.

The time of import from the Indian port to Gdynia takes about 36 days.

The port of Chennai is one of the largest and one of the oldest ports in India. It is located in southeastern India. It started its activity in 1881. However, sea trade in this place started already in 1639 on the unbuilt shore.

It has its railway lines, three docks, and twenty-four berths. The entire port is artificially opened. It is also referred to as the “Gate to Southeastern India.”

The port covers an area of 274 hectares. It is divided into zones north, south, and central.

The most frequently exported goods from the port are iron ore, leather or cotton fabrics. On the other hand, imported are steel, wheat, iron, and machinery.

Kandla Port is a seaport located in Kutch County in West India. It is one of the main ports on the west coast. It was built in 1950.

The Kandla Port Special Economic Zone was the first economic zone to be opened in India.

Currently, the port of Kandla is the Indian center of grain export and import of crude oil, chemicals, iron, and steel.

The port is currently preparing to increase its handling capacity through the involvement of the private sector.

The largest ports in India

Today, India’s seaports are becoming an important destination for foreign investors. Further upgrades are planned to improve the quality of services in Indian ports and also to increase the volume of transshipment.