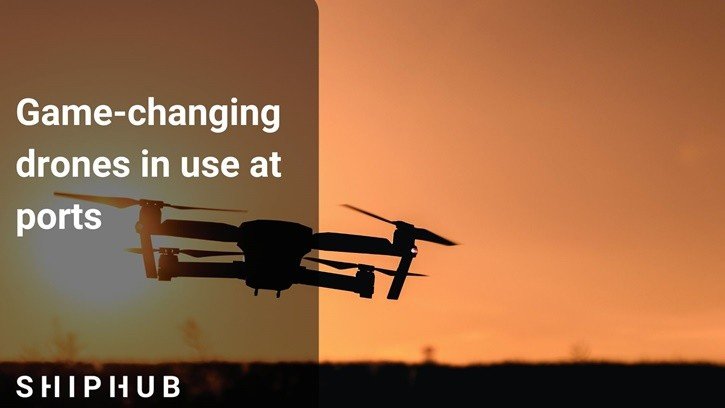 The pandemic and restrictions implemented to minimize the number of cases prompt the pursuit of remote solutions. Drones are ideal machines for remote delivery of goods. A Singaporean startup has introduced a commercial autonomous delivery service via drone. The drone flies BVLOS – Beyond Visual Line of Sight, which enables the drone to cover far greater distances.

Game-changing drones in use at ports

Drones have already been used in the maritime industry before. Till now, they gather data about ships at sea, are used to control borders, monitor pollution, and detect illegal activities such as fishing and drug trafficking. These machines are also very useful in maritime rescue. Delivery drones have a field for the development in the context of maritime industry.

There already exist drones that are enabled to deliver goods to ships and offshore platforms. A Singaporean startup F-drones, with such drones at its disposal, has been given permission to carry regular commercial activities. Startup has signed a one-year contract with Eastern Pacific Shipping (EPC) for two hundred deliveries.

The first delivery of a 2 kg package over 2.7 km was successfully completed in 7 minutes. F-drones obtained the first-ever authorization of the government agency Civil Aviation Authority of Singapore to commercialize the service. Drones manufactured by a third company are able to deliver goods weighing up to 5 kg over a distance of 5 km.

F-drones, however, is ambitious. The company plans to create its own machine capable of traveling 50 km with a load. But that is not all; the startup hopes that next year it will put into operation drones with a load capacity of 100 km capable of covering a one-hundred-kilometer route.

According to estimates, up to 20% of shipments in ports around the world weigh up to 100 kg. If the company gets its way, it will be a significant competitor to other delivering options to ships, such as helicopters and smaller boats. F-drones will offer transport at competitive, much lower prices. In addition, drone delivery is faster and more environmentally friendly.

Drone deliveries are not only made in Singapore. A Wing’s pilot program, owned by Alphabet, was launched in Christiansburg, Virginia. Until now, in the United States, the Federal Aviation Administration authorized only a fraction of those interested to use drones flying BVLOS. Due to the current situation, regulations may change, and drones will be used more widely in other sectors.