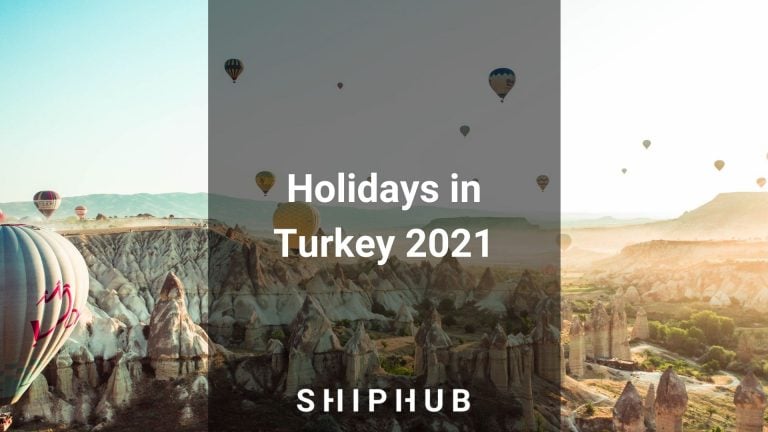 In Turkey, there are 14.5 days of public holidays. It is said to be one of the highest numbers worldwide. Whether you plan to go to Turkey as a tourist or a businessperson, check holidays in Turkey of 2021. If you happen to be in Turkey during the public holidays, you may face some difficulties.

All public holidays in Turkey are non-working days. Take that into consideration if you are doing business in Turkey. You may not be able to reach your contractor or to dispatch goods during these particular days. Businesses, as well as government offices, are closed during these periods. Bear in mind that shipping delays occur more often during holidays than usual.

There are two types of public holidays in Turkey. They are either National Holidays or Religious Holidays (Ramadan Festival and Feast of Sacrifice). Religious festivals’ days change every year because they are based on the Islamic Hijiri lunar calendar. The Hijiri calendar is eleven days shorter than the Gregorian year.

On January 1, New Year’s Day (Yılbaşı) is observed all around the world. It is the first day of the Gregorian new year.

National Sovereignty and Children’s Day (Ulusal Egemenlik ve Çocuk Bayramı) commemorates the foundation of the Grand National Assembly of Turkey at Ankara in 1920. It is the only Turkish holiday devoted to the children, as they are the nation’s future.

Labor and Solidarity Day – May 1

Like it is observed in many countries, Turkey also celebrates May Day (Labor and Solidarity Day).

Ramazan Bayramı, Sugar Feast or Festival of Breaking the Fast, follows the holy month of Ramadan. In the lunar calendar, it falls on the first day of Shawwal (10th month). The religious holiday lasts for three and a half days. During this period, people visit their relatives and pay respect to older ones. Be mindful that during the holy month Ramazan, you should refrain from drinking and eating in public during the day to show respect. You may also not be able to consume alcoholic beverages while eating out during daylight hours.

On May 19 falls the commemoration of Atatürk, Youth and Sports Day (Atatürk’ü Anma Gençlik ve Spor Bayramı). The date marks the beginning of the national liberation movement initiated by Atatürk’s landing in Samsun in 1919. The day is also dedicated to the youth. Young people march in parades, sing, and dance. They also carry the Turkish flag from Samsun port, where Atatürk landed, to Ankara.

Sacrifice Holidays or Sacrifice Feast (Kurban Bayramı) begins on the tenth day of the Islamic month Dhu’l-Hijjah. It lasts for around four days. It is a custom that on the first day of the Sacrifice Holidays, men of each family go to a mosque for special morning prayer. Another tradition is to share sacrificial sheep’s meat with neighbors and relatives.

Victory Day (Zafer Bayramı) is dedicated to the armed forces. On that day, the victory at the final battle in Dumlupınar ending the Turkish Independence War in 1922, is celebrated. Victory Day is also observed in Northern Cyprus. There are organized military parades and ceremonies at monuments to the Turkish Republic founder, Mustafa Kemal Atatürk.

On Republic Day (Cumhuriyet Bayramı), Turkey’s citizens lively commemorate the republic’s proclamation in 1923. The celebrations last one and a half days. Many events are organized – concerts, art events, fireworks displays, and a governmental ceremony in Ankara’s Cankaya Palace.

Public holidays may affect your travel plans. During the celebrations, administration buildings, most businesses and schools are closed, and public transport is heavily used. Therefore, if you plan to travel to Turkey, it is advised to get familiar with the Turkish public holidays to avoid difficulties. It is also very likely that there will be more shipping delays over the holidays.

Get to know various holidays observed across the world.