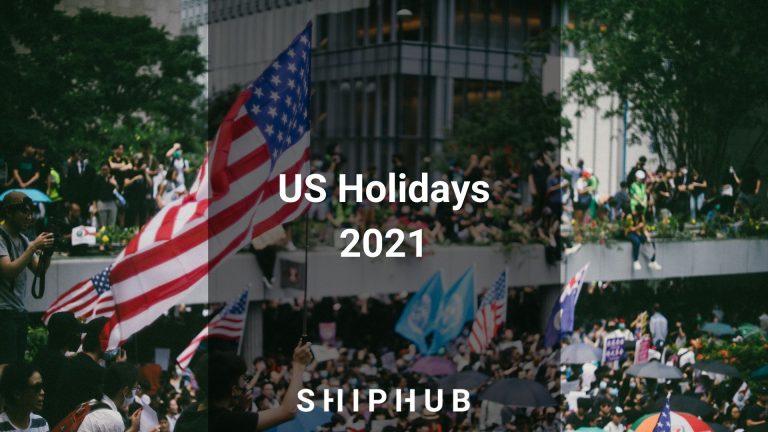 Every country has its traditions, which should always be taken into account when making business deals. A regular day in one country can be a national holiday in another. In the US, ten days of the year are considered federal holidays, meaning all non-essential government offices and banks, as well as the stock market, are closed. It does not always mean that all businesses are closed. Whether or not a holiday is a day off work varies from state to state and often depends solely on the employer. Check the US holidays of 2021.

Most US holidays are observed on a different day each year. That is because they are celebrated on, for example, the third Monday of the month instead of one set date. It is also worth keeping in mind that holidays often cause delays and traveling or shipping products in the US around that time might not be the best idea. Here is a list of all ten of the most important US holidays along with their observed dates, together with how likely they are to be considered days off.

Same as in other countries using the Gregorian calendar, January 1st is considered the first day of the new year. Cities often organize parades and concerts to celebrate, and families and friends meet up for private dinners or parties. The year is started with fireworks and wishes for the upcoming year.

January 1st is almost always a day off work, and the majority of companies are closed, so it is not advised to try to contact business partners that day.

Celebrated on the third Monday of January of each year, this holiday honors Martin Luther King Jr., the chief spokesperson, and leader of the Civil Rights Movement. Even though it is a relatively young holiday, it already has distinct traditions. Americans are encouraged to spend the day volunteering for a good cause, and numerous organizations launch service activities for the day. Many workplaces give their employees leave, although it is not mandatory.

Also called Washington’s Birthday, this holiday is celebrated on the third Monday of February. It used to honor George Washington only, later adding Abraham Lincoln and other presidents. A cherry pie is a traditional food eaten on the day. It refers to the old myth of the six-year-old Washington cutting down his father’s cherry tree and immediately admitting it when accused, alluding to the honesty he always prided himself on as president.

All banks, federal offices, and public schools are closed, but private companies can decide whether to grant their workers a day off.

Memorial Day is designated to commemorate those who lost their lives in service of the US military. It is celebrated on the last Monday of May. Like previously mentioned holidays, it is not required for employers to give a day off, but it is often expected.

Often called simply the Fourth of July, the holiday always ensues in grand celebrations. Firework shows are the biggest attraction of the day, but many other festivities are organized as well. Independence Day is considered one of the major American holidays, as it commemorates the Declaration of Independence. If the fourth falls during the workweek, it is a day off; and if it falls on the weekend, it is either the preceding Friday or the following Monday that guarantees a leave. This year, the day off falls on July 5th.

Labor Day is a holiday celebrating the American labor movement and workers who helped build the United States. Typical festivities include parades and barbeques, although it is not very widely observed.

It is celebrated on the first Monday of September, and it is one of the most common holidays to guarantee a paid leave. 97% of employers set this date off; therefore, business partners will likely be unreachable.

This holiday commemorates Christopher Columbus’ arrival in America, and its celebrations vary from state to state. In some, it is known as Indigenous Peoples’ Day, and the occasion is an opportunity to learn about indigenous cultures. In other places, October 11th is not considered a holiday at all. It is due to the holiday’s problematic nature, as celebrating Columbus Day usually omits the violent nature of colonization.

The unstable character of Columbus Day means that whether businesses function or not entirely depends on which area of the US we are looking at.

Veterans day is a holiday celebrating those who served in the US military. It differs from Memorial Day, as it acknowledges living veterans rather than those who lost their lives in service.

If the 11th falls on the weekend, some employers offer the preceding Friday or following Monday to be a paid holiday, although it is not very common.

According to some, Thanksgiving is the most American holiday there is. It is celebrated on the fourth Thursday of November, which in 2021 will fall on November 25th. The most popular tradition is to gather around a table with family and eat Thanksgiving dinner together. A must-have thanksgiving dish is a turkey, along with other foods ingenious to North America. Because Thanksgiving is a mostly family-oriented holiday, so reaching a business partner on that day is not advised.

The holiday is a day off for schools and businesses, and some of them stay closed for the next day, which became known as Black Friday. Retail stores are the most heavily packed this time of the year. Additionally, because many Americans travel to spend time with their families, Thanksgiving is an incredibly intense period in air and road traffic. It should be kept in mind when planning travel in the US or shipping goods.

Like in over 160 other countries, Christmas is one of the most widely celebrated holidays in the US. Festivities start as early as in November and last throughout December, traditionally ending on New Year’s Eve. If December 25th falls on the weekend, as it will in 2021, the 24th is a day off instead. Christmas is the only federal holiday in the US considered religious, and employers are obligated to take different faiths’ holidays into account while giving employees days off.

Similarly, to Thanksgiving, traffic is heightened during Christmas, so traveling in the US during this time and shipping products should be planned early or even postponed.

Get to know various holidays all around the world.