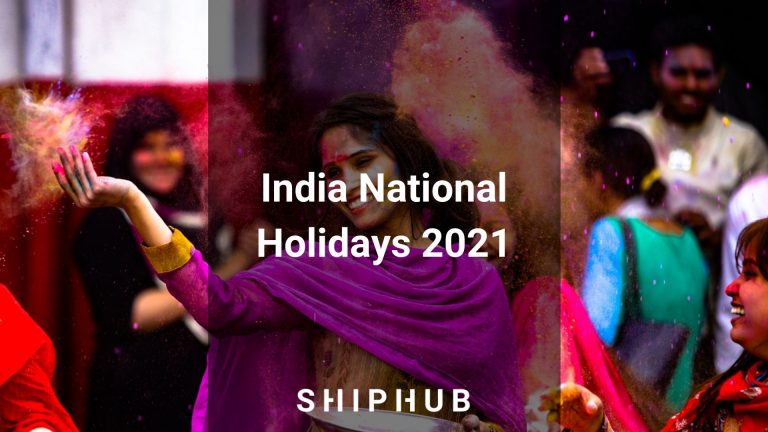 In India, people from various religions coexist together. As each religion has its holidays, there is plenty of them in India. There are gazette and restricted holidays, and both types are equally important for business settings. Below is a list of India National Holidays of 2021.

It is advised to check upon your business partner which national and religious holidays his company celebrates to avoid business-related difficulties. Therefore, planning business trips to India will help you to avoid obstacles. The below-mentioned holidays are mostly statutory holidays, and some entrepreneurs or employees can extend them at their request. Before going to India, we also advise you to check the regional holidays, which may be celebrated in the area of your destination.

As it was mentioned, holidays are divided into two groups: gazetted and restricted.

Gazetted holidays are obligatory all over the country. During the gazette holidays, the public institutions are closed, and people have the day off.

Restricted holidays are the extra three holidays chosen by each state individually from the list of additional holidays. Not every state has the same ones, so it is crucial to check that before because public offices are closed or have reduced working hours.

Within gazetted, which are obligatory, only three are National holidays. The remaining holidays in India are connected to various religions. Central and State governments in India issue annually a list of holidays observed in the respective government offices during the year.

National holidays – they are held in memory of the most important historical events celebrated by all Indians.

Republic Day in India is one of the most celebrated holidays of the year. It honors the date on which India’s Constitution came into effect in 1950 and completed the country’s transition towards becoming an independent Republic. Republic Day is celebrated with great pride and enthusiasm throughout India. The main event is the Republic Day Parade held in the Rajpath in New Delhi; however, each state has begun to hold similar parades to commemorate this event.

Independence Day in India is celebrated every year on the 15th of August in honor of India becoming independent from British rule. On the eve of the 15th of August 1947, the India tricolor (saffron, green and white) flag was first hoisted by Jawahar Lal Nehru, the first Prime Minister of India, at the Red Fort of Delhi. Independence Day is an extremely merry day. On this day, tributes are paid to the freedom fighters who sacrificed their lives to gain India’s freedom. The main event occurs in New Delhi, where the Prime Minister hoists the National Flag at the Red Fort accompanied by the gunshots, parade, remarkable live performances, and music.

Gandhi Jayanti is a national holiday celebrated across India to mark the birthday of Mahatma Gandhi, the “Father of the Nation.” It is celebrated on the 2nd of October. This day also celebrates the International Day of Non-Violence as Gandhiji was the preacher of non-violence. He started the ‘Satyagraha’ (non-violence) movement for Indian freedom and played an incredibly significant role in India’s independence from British rule. A special event is organized at Raj Ghat, New Delhi, where Gandhiji was cremated.

Good Friday, just before Easter, is a Christian holiday commemorating Jesus’ final hours, crucifixion, and death. Good Friday is a time to reflect on the life of Jesus as well as his death. It is part of Holy Week, which includes Palm Sunday and Jesus’ Last Supper.

Mahavir Jayanti is celebrated by followers of Jainism to honor the birth, life, and teaching of Lord Mahavira, an important religious figure to Jains. It is celebrated on the 13th day of the waxing (rising) half of Caitra’s Hindu month. It is usually held in either late March or early April in the Gregorian calendar.

The Islamic holiday of Id-ul-Fitr marks the end of Ramadan, the Islamic holy month of fasting. It is regarded as a time with Muslims gathering their friends and family to show gratitude toward Allah following the previous month of reflection. The holiday serves as a great reminder for Muslims to be grateful for what they have and to share with those who may be less fortunate.

Buddha Purnima, also known as Vesak, is a Buddhist holiday celebrating Gautama Buddha’s life. It is celebrated on the day of the full moon in May. This day is spent in the Buddhist temples where monks speak and cite verses. The custom is to place a Buddha baby statue in a basin of water with flowers. Pouring water over the figure symbolizes a new and pure beginning. Some Buddhists go to the pagodas to pour water at the bottom of the sacred tree in remembrance of the Buddha’s Enlightenment.

Eid al-Adha, the Feast of Sacrifice, is the most important feast in the Muslim calendar. It celebrates the Prophet Ibrahim’s willingness to sacrifice his son Ishmael in submission to Allah’s command before Allah stopped him. Three essential things form a part of Eid celebrations following the teachings of Prophet Muhammad – offer a prayer before sunrise, dress up in the best clothes available, and celebrate purity.

Muharram refers to the first month of the Islamic Calendar. The entire month of Muharram is sacred, according to the Muslims. However, it is the tenth day, which is of most significance. Different factions of the Muslim community observe this day for various reasons. While the Shia Muslims celebrate this day to mourn the death of Husayn Ibn Ali, the Sunni Muslims observe this day to celebrate Moses’ victory over Egyptian Pharaoh.

Dussehra, also known as Vijayadashmi, is a significant festival celebrating Rama’s triumph, an avatar of Vishnu, over the 10-headed demon king Ravana who abducted Rama’s wife, Sita, symbolizing the victory of good over evil. Dussehra is marked on the 10th day of the bright half (Shukla Paksha) of the month of Ashvin (Ashwayuja), according to the Hindu calendar. For many, it marks the beginning of preparation for Diwali, which occurs 20 days after Dussehra.

Milad un-Nabi Id-e-Milad celebrates the Prophet Mohammad’s birthday. It is celebrated in the third month of the Islamic calendar. Because the Islamic calendar celebrates it, the date varies in the Gregorian calendar. The Milad un Nabi or Mawlid is celebrated in different ways in different parts of the world, but most people get together at the mosque or the dargah and carry on long hours of prayers. There are also organized community meals where people gather and tell stories about Mohammed’s life.

Diwali, also known as Deepavali, is a festival of lights. The exact day is decided according to the Hindu calendar. The day is primarily celebrated to commemorate the return of Lord Rama from his 14 years of exile. However, there are various other stories associated with the festival. Diwali celebrations may last for up to five days. Many people decorate their homes and workplaces with tiny electric lights or small clay oil lamps. Bowls of water with candles and flowers floating on the surface are also popular decorations.

Guru Naka Jayanti falls on the full moon day of the Kartik month of the Hindu calendar. It is celebrated all over India to commemorate the birth of Guru Nanak, the founder of Sikhism. During the first two days of the festival, a ceremony called an Akhand Path is takes place. It is a continuous, uninterrupted reading of the entire Guru Granth Sahib (the Sikhs’ Holy Book), timed to end on the birthday anniversary.

Many Christians in India celebrate Jesus Christ’s birth on the 25th of December. The celebrations are most noticeable in states where there are many Christians. Many Christians celebrate Christmas Day by attending special church services, spending time with family members, and eating a festive meal. They sometimes display small electric lamps or little clay oil-burning lamps and decorate their homes with banana or mango leaves. Christmas trees in India are usually an imitation of pine trees or branches of native trees or bushes.

Only four of ten restricted holidays are marked in the official calendar, where most people have the day off, and government offices and businesses may be closed.

Maha Shivaratri is a worship festival of the Hindu god Shiva, along with his wife Parvati, the “mother goddess.” “Shivaratri” means “the great night of Shiva.” Prayers and worship of Shiva through the night are supposed to commemorate Shiva’s time “saved the world from ignorance,” which is symbolized by darkness. Of the twelve Shivaratri festivals held during the Hindu year, Maha Shivaratri is the holiest for Hindus. The most popular Maha Shivratri celebrations take place in Ujjain, believed to be the residence of Lord Shiva. Large processions are carried out throughout the city.

Holi is a festival of colors celebrated primarily in India. According to mythology, the festival is celebrating the death of Holika. Holi is also observed in the celebration of the spring season’s arrival, the conclusion of winter, and the blossoming of love. In most regions, the Holi festival is celebrated for two days. The first day is known as Jalanewali Holi –  the day when the Holi bonfire is done. On that day, people gather, perform religious rituals in front of the bonfire, and pray that their internal evil is destroyed the way the fire killed Holika. The second day is known as Rangwali Holi –  the day when people play with colored powder and water.

This festival is celebrated to commemorate Lord Ram’s birthday, who is also known to be the seventh avatar of Lord Vishnu. Lord Ram is said to be incarnated on earth to kill Ravana. The day is particularly significant to the Vaishnavism tradition of Hinduism. Devotees celebrate this day by observing a fast and seek blessings from Lord Ram. The festival signifies the victory of goodness over evil.

The Krishna Janmashtami festival marks Krishna’s birth, one of the most popular deities worshipped by Hindus. It falls in the Hindu month of Sravana, which generally corresponds to August or September. The actual celebration of Janmashtami starts at midnight when Krishna allegedly was born. Some Hindus decide not to retire for the night during the celebrations and instead sing bhajans, traditional Hindu songs. All over India, this day is celebrated with devotional songs and dances, pujas, arti, and blowing of the Conch.

Check Holidays for more articles about holidays around the world.