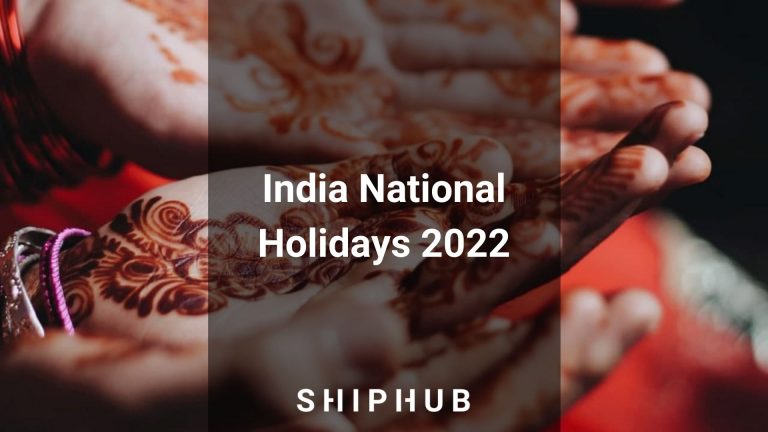 Being one of the fastest-growing economies globally, India attracts more and more importers’ attention worldwide. In 2019, India was the 10th largest supplier of imported goods both for the EU and the US. In order to plan the cooperation with Indian partners properly, one should pay attention to numerous national holidays that affect business in this country. In this article, we outline the crucial India National Holidays 2022.

As India is a multicultural and multireligious country, so there are many different holidays throughout the year. What is more, not everyone celebrates all of them. In fact, due to its diverse culture, India holds more than 20 national holidays annually, a list of which is being officially published at the beginning of each year. Many of the holidays are movable, which might be confusing for foreigners, as well as the fact that plenty of them are only regional.

According to the official state calendar, businesspeople cooperating with India might expect numerous bank and office closures throughout the year. It is best to follow the Indian government’s website about holidays for detailed and verified information.

Besides regional differences that must be considered, there are also individual variations in observance, especially when it comes to religious holidays. It is best to contact your Indian business partner to find out which holidays are celebrated in their company. Remember to always check for national and regional holidays when planning a business trip to India, which may help you avoid difficulties.

There are two main types of Indian holidays: gazetted and restricted.

The given dates of national holidays in India, 2022, are only orientational, and changes may apply when the official holiday calendar is issued.

Republic Day commemorates the day India’s Constitution came into effect in 1950 and turned the country into a republic. The main celebrations take place in the capital city, New Delhi. Among the significant Republic Day festivities, there are parades, Beating Retreat, and Padma Awards distribution.

Independence Day is a celebration connected to the liberation of India from British rule in 1947. It is widely celebrated in the whole country with flag-hoisting, parades, and cultural activities. Again, the main event is held in New Delhi, including the president’s speech and the prime minister’s ceremonial flag-hoisting.

Gandhi Jayanti, which is Mahatma Gandhi’s birthday, has become the third Indian national holiday in 2007. Gandhi’s figure is essential to many Indian people, as he inspired the nonviolent resistant movement that led to India’s independence. The holiday is observed by offering prayers and tributes, holding commemorative ceremonies and cultural events.

Holi is an ancient Hindu festival, also known as the “Festival of Colors,” which celebrates the triumph of good over evil and the beginning of spring. Observance includes religious rituals, smearing each other with colorful powder, and family reunions.

Ram Navami is another spring Hindu festival that celebrates Rama’s birth, a major deity of Hinduism. The event is characterized by artistic performances, charitable events, fasting, and preparing an infant Rama statue.

Good Friday is a Christian holiday that takes place during Holy Week and commemorates the crucifixion of Jesus Christ. It is the time of reflection for the Christian people. On this day, special church services can be attended in India.

Id-ul-Fitr is an Islamic holiday that marks the end of Ramadan – the month of dawn-to-sunset fasting. It is the time of family gatherings and festive meals, expressing Muslims’ gratitude towards Allah. Celebrations include prayers, charitable acts, reunions, and gift-giving.

Bakrid is the major annual Islamic holiday. It honors Ibrahim’s willingness to sacrifice his son to Allah. However, a lamb was provided to be offered instead. Muslims mark the occasion by prayers, sacrifice, charity, festive meals, and gift-giving.

Muharram means the first month of the Islamic calendar, but it is also the name of the holiday taking place on the 10th day of this month, which is of most significance. It is marked by Shia Muslims with mourning Husayn’s (prophet Muhammad’s grandson, who died in the Battle of Karbala) sacrifice, whereas by Sunni Muslims – with fasting.

Janmashtami is a Hindu holiday that celebrates the birth of Krishna. The followers of Vaishnavism particularly celebrate it. Festivities include dance-drama enactment of Krishna’s life, devotional singing, fasting, night vigils, and visiting temples.

Dussehra (Vijayadashami) is a holiday that is celebrated differently in various parts of India. It celebrates the victory of good over evil and refers to several Hindu stories in which the noble defeated the hostile. It is honored with processions accompanied by music and chants, idols’ immersion, and starting preparations for Diwali.

Milad-un-Nabi (Mawlid) is an Islamic holiday that marks the birth of the prophet Muhammad. It has been celebrated for centuries in Muslim communities. Observances include prayers, fasting, public processions, social gatherings, and decorating houses.

Diwali – a holiday celebrated by Hindus, Jains, and Sikhs, also called the festival of lights. It is a symbolizes victory of light over darkness. Festivities, often lasting five days, are based on joyous gatherings and home decoration. The central motif is light; small clay oil lamps and electric lights are widely used to honor the occasion.

This holiday commemorates the birth of the founder of Sikhism, Guru Nanak, being a significant annual occasion for celebration and prayer among the Sikhs in India. Festivities include the continuous reading of “Guru Granth Sahib” (the holy book of Sikhs) two days before the birthday, processions held one day before, and offering prayers.

Christmas is a major annual holiday for Christian people. It commemorates the birth of Jesus Christ. In India, it is mostly celebrated by attending special church services, family gatherings, festive meals, and home decoration. Instead of traditional Christmas trees, Indian people decorate banana and mango trees.

There are numerous restricted holidays in India, which can be chosen individually according to one’s beliefs and residence region. Among those, some of the most popular are:

Lohri is a folk festival held in the Punjab, Haryana, and NCT of Delhi regions that marks the winter solstice and welcomes longer, warmer days. Celebrations include the lighting of a bonfire, singing, and dancing.

Maha Shivaratri is a Hindu holiday held in honor of Shiva, one of Hinduism’s principal deities. It is a solemn festival, which symbolizes self-improvement and overcoming darkness. Maha Shivaratri is observed mainly by prayers, fasting, yoga, night vigil, and remembering Shiva.

It is a festival observed by the Parsi community in India. The holiday is also known as “Nowruz,” marking the beginning of spring. It is globally celebrated in March; however, in India, it takes place in August because it is observed according to a different calendar. Festivities include feasts, decorating houses, and exchanging wishes.