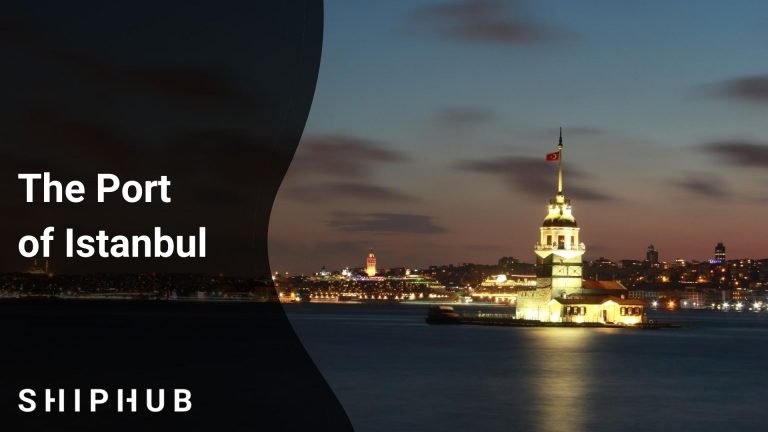 Sea freight enables transporting large cargo on long distances at a relatively low-cost. There is no sea transport without ports. Tukey alone has almost 200 ports and piers in total. The Port of Haydarpaşa is located in Istanbul, the biggest and the most populous city in Turkey. Being a deep water seaport, the port of Istanbul plays a significant role in the region.

The Port of Istanbul

The Port of Istanbul is also called the Port of Haydarpaşa or Port of Haidar Pasha (code TRHAY). The port authority is the General Directorate of Turkish State Railways (TCDD). TCDD owns a total of seven ports in Turkey and has connections to two more ports.

The Port of Haydarpaşa is located at the southern entrance to the Bosphorus. Two breakwaters protect vessels in the port, which total area is 343,420 square meters. The port handles ro-ro, containers, and general cargoes.

Shipping is a major component of the Turkish economy. In 2019, 53,7% of imports and 60,3% of exports were by sea transport. The sea sector’s share in the Gross National Product (GNP) reached 2,4%. Moreover, ports under TCDD handle about 40% of the total cargo in the country.

Anatolian Baghdad Railways Company started to build Haydarpaşa Port on the 20 of April 1899. The company operated the port until 1924. On the 24 of May 1924, Haydarpaşa Port was purchased by the government. Three years later, it was transferred to the Railways Administration under the Ministry of Public Works.

Port needed modernization and expansion, as its capacity was not sufficient. The first part of the extension was added in 1953. The port was gradually transferred to TCDD Enterprise since 1954, and its operation began in 1967. Then, from 1979, a ferry pier, CFS 1 warehouse, a breakwater and more were added to the port. Over the following year till today, the port has been developed to suit the changing needs.

The Port of Istanbul details

The Port of Istanbul contains two large piers with 21 berths. It handles dry bulk, general cargo, roll-on/roll-off cargo, as well as servicing motorboats and containerized cargo. It has lifts of over 100 tons’ capacity, one floating crane of 250 tons’ capacity, and seventeen mobile cranes of 5 to 25 tons’ capacity. The annual ship acceptance capacity is 1,169.

The modern ro-ro terminals can accommodate 360 ships per year. The terminals can handle annually 410,000 tons of ro-ro cargo and over 149,000 truck pieces.

According to the Minister of Transport and Infrastructure of Turkey Karaismailoğlu, within the framework until 2023, authorities aim to spread environmentally friendly and sustainable port practices by coordinating their port investments with a holistic perspective. Such solutions are perceived favorably by the general public and interested parties.

In the future, the Haydarpaşa Port of Istanbul will become a part of a tourism project. It will serve another purpose once the Marmaray Project is completed.

The port serves shipping routes to ports in cities such as:

The shipowners with the Haydarpaşa Port calls: