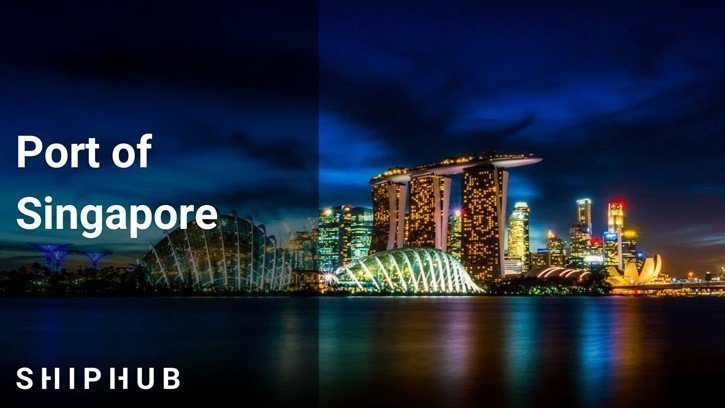 Port Singapore is one of the largest ports in the world. It serves over 33.7 million TEU every year.

Located at the southern tip of the Malay Peninsula, the Port of Singapore is considered to be the second-largest port in the world in terms of tonnes of cargo handled. Right after Shanghai, which in 2005 overtook it in the rankings. In 2013, loads with a total capacity of 13.2 million TEU were transported here, while in 2018, it was already 33.7 million TEU. The port enables the transport of goods to over 600 ports in 123 countries. It is divided into two main terminals: container PSA Corporation Limited and Jurong Port, supporting, among other goods transported onboard in bulk.

The beginnings of trade on the Singapore River date back to the 13th century when the first port settlement was founded. However, it did not stand the test of time, and Singapore remained without a port until the era of British colonialism in the 19th century when East India Company in 1820 founded the Singapore Harbor Board. Favorable geographical location and favorable customs policy ensured the economic boom of the port. After Japan’s attack on Singapore in 1942, the seaport faced the vision of completely rebuilding its infrastructure. Thanks to the implemented measures, the volume of commercial shipping began to increase rapidly, from 20.4 million NRT in 1947 to 82.9 million NRT in 1963. In 1964, the Singapore Harbor Board was changed to the Port of Singapore Authority (PSA).

In the 1960s and ’70s, there were rapid changes driven by industrialization, sealed with the creation of the Jurong port in 1965, for the transport of bulk cargo. In 1971, PSA took over and transformed the former British Navy base into the Sembawang embankment, and also invested in the construction of the first terminal in Southeast Asia. Soon Pasir Panjang quay began operations, and in 1972 The Tanjong Pagar Container Terminal was established along with three container berths. In the same year, on June 24, the first container ship arrived at the port – M.V.Nihon.

The expansion of the port was continued in the 1990s. It included the addition of moorings at the new Brani terminal, reconstruction of facilities at the Tanjong Pagar terminal, and an increase in capacity at the Jurong Port to handle the growing volume of bulk cargo.

In 1996, the functions of the PSA port were taken over by the Maritime and Port Authority of Singapore, while PSA became a corporation in 1997 and began to function as PSA Corporation Limited. The company currently manages the port, except for Jurong.

There are four container terminals in the port area, of which PSA (Port Singapore Authority) Terminal with 54 berths for ships is the most significant. It employs 33.000 employees and moves 220.000 containers a day. There is also a dedicated car terminal serving approximately one million vehicles a year.

In 2018, it transported loads with a total capacity of 81 million TEU. On June 18, 2019, it won in the category “Best Container Terminal – Asia,” becoming the thirtieth winner of the Asian Freight, Logistics & Supply Chain Awards (AFLAS).

It is a multi-task operator handling bulk, general, and container loads. It officially started operations in 1965, and in 2001 opened its container terminal. As a result, becoming a full-fledged port. Jurong Port receives approximately 40,000 ship connections per year and also serves many joint-venture terminals in China and Indonesia.

Jurong Port can be divided into:

In 2015, PSA Terminal completed the third and fourth stage of expansion of the container terminal, based on the creation of an innovative infrastructure thanks to which the sea bottom was deepened to 18 meters. This provided the ability to support container ships with a carrying capacity of over 17,000 TEU.

The port has been improved with innovative infrastructure, including an ecological set of port cranes.