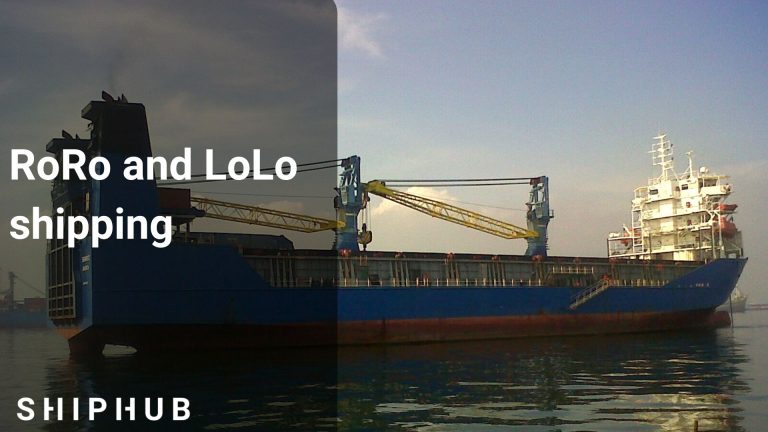 When dealing with shipping, you can often come across terms such as RoRo or LoLo, also written as ro-ro, RORO, LOLO, LO/LO. At first, they may seem quite mysterious. What do RoRo and LoLo stand for?

RoRo is a method of loading and unloading a ship, that is rolling the cargo on and off the vessel. Such loading is possible because of the construction of ships (also called RoRo), as they are equipped with ramps. Built-in ramps allow the transported trucks and cars to either drive on and off on the deck or to be hauled inside. RoRo vessels allow to load efficiently and transport wheeled cargo, as well as bulky and complex cargo. Compared to LoLo, the risk of cargo damage while transported on/off the ship is lower, although the vehicles are not secured in containers and could be damaged.

Interestingly, the history of RoRo ships goes back several centuries, to the Crusades in the eleventh century. The vessels of the time allowed heavily armed units to go ashore quickly. During World War II, RoRo vessels were used as landing craft. It is also worth adding that due to the specifics of its structure, which may have a negative impact on the stability of the ship, many safeguards are introduced to prevent cargo movement (e.g., computer ballast systems).

Two years ago, the Italian shipping company Grimaldi had the largest number of RoRo ships. At that time, it owned 30 vessels of this type; another ten were under construction. Its ACL (Atlantic Container Line) ships using the largest RoRo vessels with a load capacity of 52,000 DWT.

The first vessel of its kind in history began sailing the seas and oceans nearly 60 years ago – in the 1950s. For example, the history of Polish RoRo cargo ships dates to the early 1970s. The first vessel of this type was operated by the Polish Ocean Lines MS Starogard Gdanski.

In contrast to the horizontal loading described above, LoLo relies on vertical loading. Ships of this type are cargo ships that transport containers with on-board cranes. Cargo is loaded with the use of the cranes or other cargo handling equipment on board or the dockside cranes. This type of loading is most often used in transcontinental and cabotage transport. Also, Lolo ships have a vast amount of space available at the top of the vessel and the ship deck. In comparison with RoRo, LoLo shipping is slower but more eco-friendly.

An interesting fact is that the symbol of Gdansk – the Zuraw crane that faces the Motlawa riverbank, which was the largest port crane of medieval Europe, in the Middle Ages operated in the LoLo system.

One should know that the two types of ships exist in several variations. The RoRo and LoLo hybrid is a RoLo ship (roll-on/lift-off). Its part or all the cargo space has been adapted to load goods in both horizontal and vertical systems, by the decks or a crane. An interesting type of RoRo is StoRo (as in storage). It allows using non-road-going vehicles at ports to transport goods without wheels. Each type of cargo requires appropriate handling, so it is essential to pay attention to how it is carried aboard and off the ship.