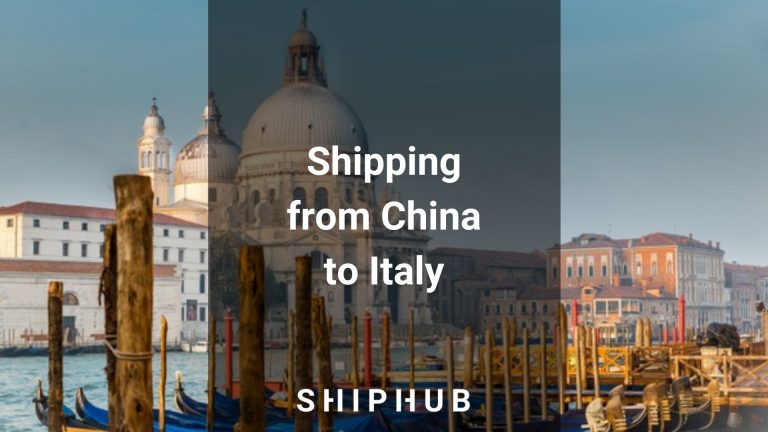 In the last decade, China has become one of Europe’s main trading partners, both in terms of export, as well as import. With China being the EU’s main import partners as of 2020, it is no surprise that Italy also maintains close ties with China. In 2020, China was Italy’s third-largest import partner, behind Germany and France, accounting for over 36 billion USD. China’s competitive prices and wide selection of products make it an ideal trading partner for many countries, including Italy. Here we discuss the different options available when shipping from China to Italy.

Italy was the first member state of the European Union to act as a partner in developing China’s New Silk Road since March 2019, proving Italy’s desire to continue its fruitful trade collaboration with China. With its continuous development, China’s Belt and Road Initiative will improve trade routes between Asian and European countries. Currently, the three main methods of shipping from China to Italy are:

Ocean freight from China to Italy

Ocean freight remains the most popular shipping method among importers due to its capacity to transport both Less than Container Load (LCL) and Full Container Load (FCL) and the low shipping costs. At the same time, ocean freight is also the slowest mode of transportation, which may not be ideal for those hoping to get their orders quickly. Ships may take anywhere between 30 and 40 days to travel from China to Italy, though transit times will typically vary depending on the port of departure and the port of arrival.

Major seaports in China and Italy

The major seaports in China include:

In Italy, the main seaports which receive freight from Chinese ports are:

Air Freight from China to Italy

When time is of the essence, air freight is guaranteed to quickly ship urgent and other time-sensitive shipments, as it only takes between 3 to 5 days for your goods to arrive at your destination. As a result, air freight is also the most expensive freight option available on the market.

However, air freight might be more convenient and advantageous when shipping a small shipment. Express shipping through international couriers (UPS, FedEx, etc.) bypasses the complex processing usually involved in air freight, allowing for much shorter transit times and less documentation.

The major airports in China are:

Which then deliver goods to Italian airports such as:

Rail freight from China to Italy

Since 2013, when rail freight first became available to many European destinations, it has become many importers’ favorite transportation option. The main reasons are that it offers both lower costs of shipping than air freight, as well as much shorter transit times than ocean freight. Additionally, rail freight boasts a much lower environmental impact than both ocean and air freight. However, despite China’s highly developed railway network, many forwarders in China do not yet offer rail freight as a mode of shipping to European nations. But with the development of the New Silk Road, rail freight is sure to gain in popularity in the future.

Most of the trains from China to the European Union travel through Kazakhstan, Russia, Belarus, Poland, and Germany and are then further distributed to other regions in Europe. Delivery is based on the same Incoterms as ocean freight, meaning cargo can be transported as both LCL (Less than Container Load) and FCL (Full Container Load). On average, rail freight takes about 15 days from China to Italy, although transit times will naturally depend on your chosen arrival terminal and departure terminal.

The main railway terminals in China are:

In Italy, most trains run to Milan’s railway hub – the largest city in Northern Italy – before being further transported to the South of the country.

EU tariffs and regulations when importing from non-EU members

As is the case during most intercontinental trade, various documents and certificates will be needed when importing goods from China to Italy. Customs duties, determined by calculating the sum of the customs value and the transportation value, must be paid by all importers buying products from non-EU countries. To legally import from China to Italy, you will first need to register for an EORI number (Economic Operator Registration and Identification). As Italy is a member state of the European Union, all imports need to comply with EU regulations. These include waste production and management regulations, CE certificate, fumigation regulations, and many others. Additional information on current EU duties and tariffs can always be found on the European Commission’s TARIC website.

When importing goods from China to Italy, it might be worth comparing different offers made by verified shipping companies. Shiphub.co allows you to quickly receive a quote for your shipment based on your chosen form of transportation and shipping type, facilitating the process of importing from China.