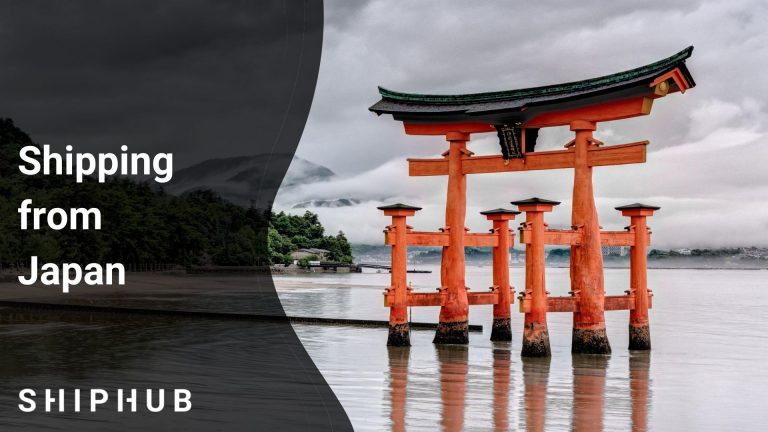 One of the top export countries in the world is Japan (ranked 5th). It is the 4th largest goods trading partner for the US in 2019. Japan is also the 7th largest partner for the EU exports of goods. It is also Australia’s 3rd largest source of goods imports, including machinery and transport equipment, as well as electrical machinery. Europe imports from Japan primarily machinery and transport equipment, other manufactured products, and chemicals. Japan exports to the US mainly passenger vehicles, motor vehicle parts, and machinery. In the following article, the possibilities of shipping from Japan to the EU, the USA, and Australia are presented.

Shipping from Japan to the EU by sea

When it comes to transporting heavy loads over long distances, sea transport is the best option. You can choose between LCL (less than container load) or FCL (full container load).

For example, the Danish carrier MAERSK offers transport from Yokohama via Rotterdam to Bremerhaven (Germany) in 43 days (AE1 – Westbound).

MSC, on the other hand, offers a Yokohama-Southampton / Felixstowe route (38/40 days).

As well as service via KRUPUS:

The days shown are for sea transit only. You should add additional time for road transport from and to ports.

Be mindful that according to the Japanese Transport Law, 45 ‘containers are not accepted in sea transport.

Shipping from Japan to the US by sea

The most popular ports when it comes to shipping from Japan to the US are:

Transit time is about three to six weeks in some cases. A couple of examples:

The Danish carrier MAERSK offers transport from Yokohama via Hakata to Dutch Harbor in Alaska in 16 days (TP Alaska Eastbound).

Shipping from Japan to Australia by sea

In terms of shipping from Japan to Australia by sea, services are available to the ports of Sydney, Brisbane/Fremantle, Adelaide, Melbourne, and Hobart. Estimated port-to-port shipping times from Yokohama or Tokyo for sea transport are as follows:

Examples of MAERSK routes from Japan to Oceania (Australia):

As you can see, vessels moor at ports of China and South Korea along the way.

There are over a thousand ports in Japan. The most important ones have connections with hubs in Asia, e.g., in Singapore. Cargoes are loaded in ports such as (categorized by islands):

Shipping from Japan by air

Air transport is not only fast but also relatively safe. However, this form is the most expensive of all. The best option is to choose this method when transporting small quantity, valuable or perishable goods. The transport of goods by cargo aircraft from Japan to Europe or the Unites States takes several hours, but the entire procedure may take a couple of days.

For example, LOT Cargo provides the Warsaw-Tokyo connection. Lufthansa Cargo has an extensive network between the EU, the US, and Japan.

When it comes to shipping to the US, the chosen destination airports are usually:

Shipping from Japan by air to other Asian countries and Oceania takes the shortest time. According to DHL Express, the estimated transit time from Japan to Australia is around 6 days. You can compare it with transit times to other countries/regions in that part of the globe:

Multimodal shipping to the EU

Apart from the basic modes of transport, there is also the multimodal carriage of goods by rail, sea, or inland water. The cargo is transported by multiple means of transportation.

In May 2018, a transport service from Japan to Europe via Dalian in China launched. It is a transport solution that connects sea transport from Japan’s ports (Tokyo, Yokohama, Nagoya, Osaka, Kobe) to China. Then the cargo is transported by rail to terminals in Europe (Małaszewicze, Duisberg). Since then, more solutions have been available, such as EX Ocean-Solution China Land Bridge EJ (Europe-Japan) transporting goods from Europe to Japan.

Transport via the multimodal route by sea and rail modes of transportation on the Japan-Europe route takes 28 days, much shorter than only sea transport.

Alternatively, the cargo can also be transported by a cargo aircraft and a train. The cargo arrives in Chongqing, China, by air from Narita, Haneda, Chubu, or Kansai, Japan. The goods are then shipped by rail to Duisburg. In terms of FCL cargo, the transport time is 22 days, as for LCL – 23 days.

It is beneficial for you to compare different carriers’ rates for various modes of transport. On the ShipHub website, you can get a quote for both air and sea freight. Request a quote by filling out in the form:

We presented three modes of transport from Japan to other countries: sea, rail, and air. The choice of method depends on the size, weight, and quantity of the shipment, the chosen route, the expected delivery time, and other factors. The cargo can reach Europe in the span of a few days to several weeks. The transit time from Japan to the US also varies from a couple of days to six weeks. Shipping to Australia takes two days to three weeks on average.