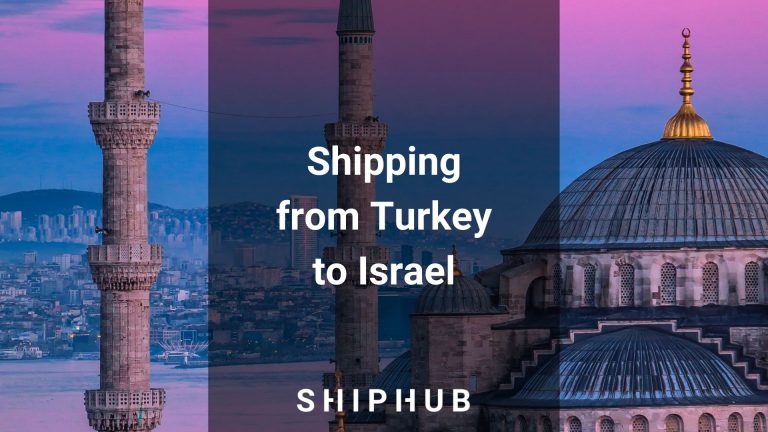 Despite years of tensions, Turkey and Israel have been able to maintain good trade relations. Their goods exchange managed to reach a record value of $8.4 billion. Moreover, Israel is Turkey’s ninth-largest trade partner. The main products exported to Israel are cars, raw iron bars, hot-rolled iron bars, cement, jewelry, and insulated wire. In this article, we will analyze the best ways of shipping from Turkey to Israel.

Shipping from Turkey to Israel – means of transportation

Sea freight from Turkey to Israel

The geographical location of both Turkey and Israel makes the best conditions to establish maritime trade links. Sea freight is the most popular shipping method. Sea shipping is relatively inexpensive compared to other means of transportation. Another advantage is that it offers an enormous carrying capacity, making it convenient for transporting larger loads or bulk shipments. The downside is longer delivery time, which is a factor that has to be considered before choosing this delivery option.

When transporting goods by the sea, one must choose between FCL and LCL transport. FCL (Full Container Load) means that a container’s total capacity is used only by one importer/exporter. On the other hand, LCL (Less Container Load) means using only a part of a container and sharing the rest with other senders/recipients. Hence, FCL shipping is faster than LCL. Usually, the shipping should take around 5-6 working days.

Airfreight from Turkey to Israel

Airfreight is the best option if your cargo must reach its destination as fast as possible. There is no faster or safer shipping method other than air transport. Unfortunately, it is also the most expensive one. Therefore, airfreight should be considered when transporting fragile goods. Since it is safer, it is also often used to transport luxurious products. Examples of products that might require airfreight are food, jewelry, luxury items, pharmaceutics, and flowers. The delivery should take around 1-3 working days.

How much does it cost to ship from Turkey to Israel?

The shipping cost will vary depending on the cargo’s type and requirements, the method of transport, the route and distance, and the chosen freight operator. It is a good idea to compare different offers made by reliable freight forwarders. ShipHub.co is a perfect website to do so. Our website allows you to receive a quote for your shipment so that you can pick a forwarder that suits your needs the best.