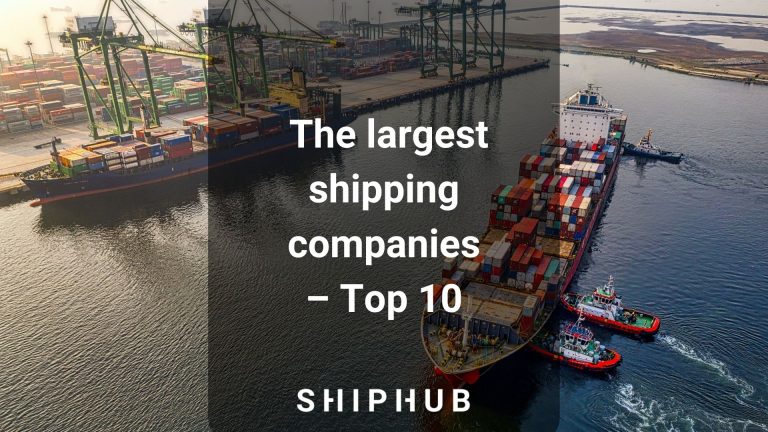 A shipowner (carrier) is the owner of the ship or another organization or person who has assumed the responsibility for the operation of the vessel from the owner and chartered it. The organization or person fulfills specific duties or responsibilities on behalf of the shipowner, such as employing the crew. Ocean carriers mainly provide shipping services. The largest shipping companies move over 80% of goods by sea.

Of all the modes of transportation in logistics, sea shipping is still the most common. Annually, around 24 million TEUs are transported by sea in the world. The ten largest shipowners ship 20.2 million TEU, accounting for almost 84% of all goods transported by sea. In addition, there are 6195 ships in the world in use, and about 53% of these ships (3296) belong to the ten biggest shipping lines.

Let’s take a look at the top 10 ocean shipping companies by the TEUs capacity (twenty-foot equivalent units) that stands for the number of standard (20-foot) container boxes.

The Israeli company has 97 vessels, and its capacity is 0.4 million TEU.

Yang Ming Marine Transport Corporation is a private shipping company based in Keelung, Taiwan. It was founded in 1972. The company owns container terminals in Taiwan, the Netherlands, Belgium, and the United States. It offers regular container transportation services in Asia, Europe, the United States, and Australia, close to 70 countries.

Yang Ming Marine Transport Corporation has 89 vessels in its fleet; its capacity is 0.5 million TEU.

Hyundai Merchant Marine is a public shipping company established in 1970 with close ties to the Hyundai Group. In the beginning, it only shipped Korean cars. Over time, it expanded its activities; now, it ships mainly coal and crude oil. Currently, HMM has the world’s largest container ships, like HMM Algeciras (23,964 TEU), HMM Copenhagen, HMM Dublin, and HMM Gdansk.

Hyundai Merchant Marine has 74 vessels, and its total capacity is 0.7 million TEU.

Ocean Network Express Holdings Ltd. is a Japanese-Singapore joint venture established in 2017 by Nippon Yusen Kaisha, Mitsui O.S.K. Lines and K Line. This major container shipping company provides services in 120 countries around the world. It has two main locations: one in Tokyo and the other in Singapore.

Hapag-Lloyd AG as HAPAG, (German: Hamburg-Amerikanische Packetfahrt-Actien-Gesellschaft) a shipping company founded in 1847, shipped immigrants across the Atlantic Ocean. It merged with Norddeutscher Lloyd in 1970 and has operated as a shipping company ever since.

Hapag-Lloyd AG fleet has 257 vessels, and their total capacity is 1.7 million TEU. It currently operates 121 ocean connections and has 395 offices in 127 countries.

CMA CGM S.A. is a private shipping and forwarding company founded in France in 1978 by the French businessman Jacques Saadé as a CMA company. In 1996, after the merger with the company CGM (Compagnie Générale Maritime), which Saadé privatized, it was renamed as a CMA CGM company. Its headquarters are in Marseille with a North American branch in Norfolk, Virginia, the US.

It has 556 vessels with a capacity of 3 million TEU. The company operates 200 shipping routes connecting 420 ports in 160 countries.

COSCO Shipping Group is a Chinese state-owned shipping company, as well as logistics, financial services, and equipment manufacturing. The company was formed by the merger of the COSCO Group and China Shipping Group in 2016. Later, it acquired Orient Overseas Container Line (OOCL). Its headquarters are in Shanghai.

The company has 500 vessels, and its fleet capacity is 3 million TEU. COSCO’s fleet serves 401 international and domestic shipping routes and calls on 356 ports in 105 countries. The company has 235 offices in total (97 in China).

MSC Mediterranean Shipping Company S.A. is a Swiss-Italian shipping company founded in 1970 in Italy. The founder is Captain Gianluigi Aponte, now one of the wealthiest people in the world. Its headquarters are in Geneva, and the company currently has 480 offices across the globe. It provides trade services, deals with dry cargo, reefer cargo, intermodal transportation, warehousing, storage solutions, and more. MSC is also a cruise liner operator – MSC Cruises.

MSC can carry over 3.8 million TEU on its 589 vessels that visit over 500 ports worldwide.

A.P. Møller-Mærsk is a Danish publicly traded family business based in Copenhagen, founded in 1904. It was named after the company’s founder, Captain Peter Mærsk Møller, and his son Arnold Peter Møller. Maersk provides such services as shipping and loading, including logistics and freight forwarding. Aside from sea shipping, it also moves goods by road and air. As the largest shipowner, the Danish company ships 12 million containers annually. Currently, it has over 50 container terminals around the world. Its branches are in over 135 countries around the world, employing more than 120,000 workers.

Mærsk’s fleet consists of 712 vessels with a total capacity of 4.1 million TEU.

The largest shipping companies – a summary

We have compiled a list of the biggest ten shipping companies in the world that have the largest shares in the maritime shipping industry. Those container lines keep growing, adding new locations, and providing new services. At the same time, those shipping lines are recognized as the best in the industry and sustain the trust of their customers and business partners.