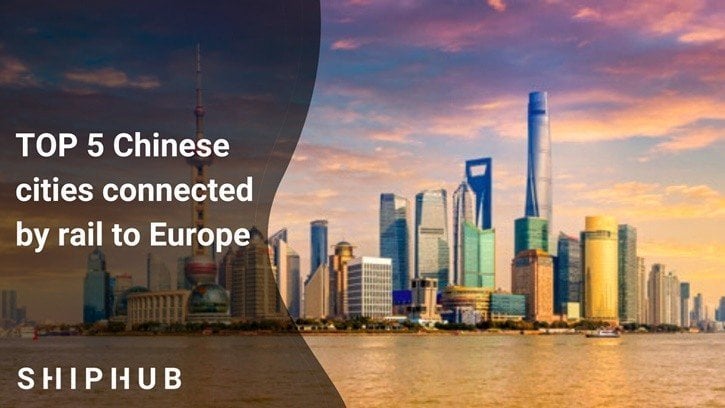 Rail links between China and Europe are constantly modernizing and gaining in importance. With expensive air transport and long sea transport, more and more people are choosing to use rail transport. In the following article, we present TOP 5 Chinese cities, from which most of the railway shipments come to Europe.

Rail trains from China in Europe

In recent years, trains from China began to appear in crowds in Europe. Starting from several trains a week, now you can count them even several dozen of one day. Rail trains from China to Europe are a key element of the Belt and Road Initiative, the so-called Of the New Silk Road.

The number of loads traveling by train from China to Europe has increased significantly in recent years due to the involvement in the New Silk Road project.

The development of rail connections is to help both Chinese inland regions and European cities. Facilitating the transport of goods to China also attracts many European exporters.

Based on data from 2018 regarding the total number of freight trains departing from China to Europe, we present the TOP 5 Chinese cities connected by rail with Europe.

Below on the map, you can see exactly where the city is.

Chengdu is a city that dominates in Chinese rail transport due to the large sector of advanced technology production.

The city is located over 1000 km from the coast, so it was decided to develop a different type of transport here.

In 2018, four trains and more departed from Chengdu to Europe per day.

Chongqing is one of the four separate cities of the People’s Republic of China. Established in 1997 after separation from the territory of Sichuan Province.

The first train from Chongqing left in March 2011 to Duisburg in Germany.

Xi’an is first and foremost, the original starting point for the Silk Road, which originated and functioned in antiquity. It is one of the historically most important cities in China.

Wuhan is located on the Yangtze River (China’s longest river) and has access to sea transport. However, this does not change the fact that rail transport is also more and more often used there.