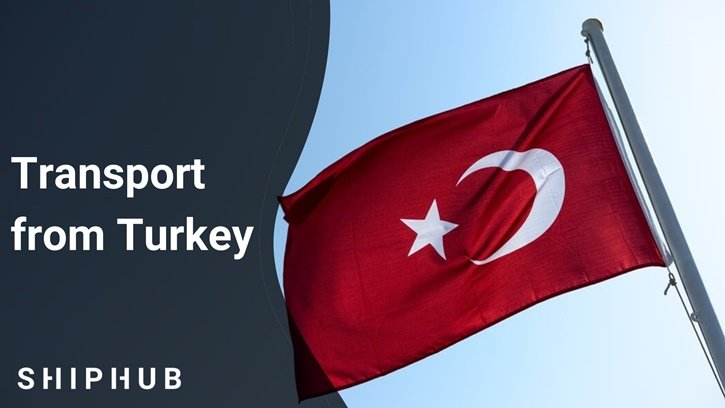 According to the European Commission’s website, in 2019 Turkey was EU’s 5th largest trading partner. Moreover, Turkey’s main export markets are the EU – Germany, France, Italy, Spain, etc. (42.4%), the UK, Iraq, the USA, and Israel. Turkey’s exports to the EU are mostly transport equipment and textile articles.  Its main USA exports in 2018 were: machinery, vehicles, agricultural products, carpets, and other textile coverings, and iron and steel. The following article focuses on transport routes, by which imported goods travel to countries in Europe, to the US and more.

One of the most advantageous transport solutions for importers/exporters is sea freight. It is slower than rail or air freight, but at the same time, more cost-effective, especially in case of large shipments.

Some of the biggest shipping companies like Maersk, MSC, or Hapag Lloyd ship both to and from Turkey.

Maersk offers nine routes, including Turkish ports such as Mersin, Tekirdag, Iskenderun, Izmir, or Ambarli, and its focus is on the Black Sea, Mediterranean, and North Sea regions.

When it comes to Europe, Maersk ships to Rotterdam, Hamburg, Barcelona, Piraeus, Antwerp, Felixstowe, and more.

MSC offers direct shipments from Turkey to Asia – e.g., China, Singapore, South Korea, and also some ports in Europe such as Antwerp.  It also provides its clients with transshipment services to North America, Canada, Australia, South America, India, and more.

Hapag Lloyd ships cargo directly not only to Europe, e.g., Piraeus or Hamburg, but also New York, Singapore, Ningbo, and more. This German shipping company also provides transshipment services from Turkey to South and North America, Asia (India, Singapore), and not only.

Turkey has about eight thousand km of coastline and 50 ports; however, not all of them handle containers. Below you will find a short description of some of the largest Turkish ports.

•    The Port of Ambarli – founded only in the 90s, but already one of the most vibrant ports. Marport constitutes its main terminal. In 2013 Marport’s capacity amounted to 1 705 962 TEU (twenty-foot equivalent unit). The other two container terminals are called Kumport and Mardasport.

•    The Port of Haydarpasa – the largest port in Istanbul until the early 2000s. Since the time Port of Ambarli was built, most of the operations were moved there.

The most important commerce ports outside of Istanbul:

•    The Port of Mersin – the largest container port in Turkey. Its production capacity amounts to 2.6 mln TEU; however, until 2018, its biggest reported size was 1.72 million TEU. It contains 26 berths and can accommodate about 30 vessels at the same time.

•    The Port of Gemlik – a port on the northwest coast. In 2008 it handled more than 336 thousand TEU containers. Passenger cars, which are manufactured in the region, constitute a large part of its exports.

Compared with sea freight, rail transport is slightly more expensive, yet a much faster solution.

The Rail Cargo Group offers extensive rail connections between Turkey and Europe. The route begins at a Turkish city of Köseköy and then passes through Istanbul, Bulgaria, Romania, Hungary, Austria, Italy and finally Germany.

Turkey is also connected by rail with China as it is a part of the Belt and Road Initiative (BRI). Learn more – Rail freight from China to Turkey.

If we would like to import a modest amount of goods or some particularly valuable commodity, air freight is the best solution. It is the most expensive, but also the fastest.

Turkish Cargo provides an extensive air network between Turkey and countries Europe or other continents – Asia, Africa, North and South America. The company ships to most European countries.

The intermodal connection between Turkey and Europe

At the beginning of 2019, DP Schenker launched a regular intermodal connection between Turkey and Poland. DP Schenker specializes in intermodal freight transport in Europe and Eurasia. This way of transportation means that cargo is put in a special container, so when the mode of transport changes, the freight is left untouched.

Importers and exporters can now use a connection between the Halkali railway station in Istanbul and a terminal in the Polish city of Lodz. DP Schenker provides 45′ HCPW (High Cube Pallet Wide) containers.

Illustrative quotes for transport from Turkey

You can get a quote from different freight forwarders on ShipHub.co. All you need to do is to fill out a form.

There are many direct and indirect trade routes between Turkey and the rest of the world. Depending on our requirements and preferences, we can choose a solution which is the most suitable for us.