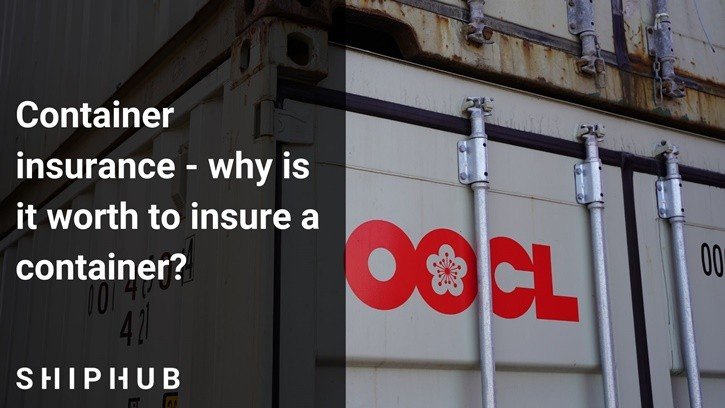 Importers often wonder whether it is worth insuring a container. It also happens that they give up this option to save money, or they forget about it. In many cases, however, the forwarder may not decide to accept the goods when it is not insured, fearing the risk. Container insurance, on the other hand, proves to be very useful and can save us from financial losses.

The purchase of appropriate insurance when importing goods from China is strongly recommended to all importers. Cargo insurance is one of the most popular. If the owner has such insurance, he may receive financial compensation at the time of suffering the damage, immediately after showing the appropriate documents. The owner can expect compensation if damage occurs through the forces of wind, storm, rain, or other forces of nature.

The insurance not only protects the transported goods but also protects us against costs that may arise in the case of the so-called common breakdowns, e.g., a pirate attack or a ship’s fire. If we don’t have insurance, all costs related to the costs of rescue, etc. go to companies transporting their goods and not to the shipowner.

When choosing cargo insurance, we should remember that we need to specify exactly what we want to protect the goods from.

The insurance period is also important. It is recommended to pay attention to the time that insurance covers. It’s best for it to work both during loading and unloading.

In the case of rail transport, the cost of insurance is usually 0.08% of the value of the goods indicated on the invoice.

The rate for such insurance is usually calculated from the value of the goods, the kind of cargo, and from the transport route.

With a small order value, the minimum rate is often given, e.g., 35 dollars.

Below are examples of calculating the cost of insurance:

It is also worth it to know the Incoterms rules, which will be helpful when importing goods from China. During sea transport, CIF Incoterms turns out to be a very popular option, where the seller is obliged to buy insurance. The value of the insurance sum should correspond to 110% of the cargo’s value. We can also choose a custom insurance option, for which we will have to pay extra. However, this form will protect the importer against a bigger risk than standard insurance.

It should also be remembered that the insurance of the goods is at the discretion of the client and follows an express order – it is not automatic.

Why is it worth it to insure a container?

A container is a very important invention, definitely facilitating the transport of goods, among others by sea. Unfortunately, it happens that some of them get into the water. Often, this is related to the improper packing of loads, with the poor arrangement, poor container accomplishment, parametric swing (a kind of rocking experienced only by container ships, rocking causing strong deviations of the ship to the side), and also with poor fixing.

Such situations can even lead to containers falling out of the ship when there are bad weather conditions. Unfortunately, this type of accident happens quite often, as what the inhabitants of the Frisian Islands could recently see.

The sea threw out containers with televisions

Some time ago, RTL Nieuws television reported that as a result of a strong storm, about 200 containers failed into the sea, containing mainly TVs, toys, and furniture. They fell from an MSC ZOE container ship floating under the Panamanian flag, which is considered one of the largest merchant ships in the world. It can accommodate up to 19 000 containers.

The containers were thrown across the sea to the beaches of the Frisian Islands on the northwestern shores of the Netherlands.

The Coast Guard informed and warned that at least three containers could contain chemical substances in the form of organic peroxides, which it is a flammable and very dangerous substance. On the beach, however, many seekers of electronic equipment could be seen, who, regardless of the warnings, sought interesting gains.

We recommend container insurance to all importers. In the case of unwanted accidents, we will be able to receive appropriate compensation, which will minimize losses.