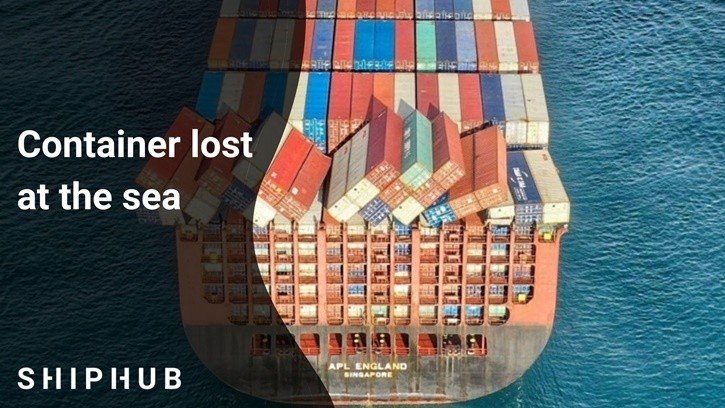 Many importers are tempted to save on the importing process. The cost can be reduced by, for instance, not concluding a cargo insurance agreement. In fact, paying for insurance is an investment. If you do not insure your cargo and the unexpected happens, you, as the importer, are exposed to large losses. Find out more about containers lost at the sea.

In May 2020, the APL England container ship sailing from Chinese Ningbo to the port of Melbourne lost propulsion for a few minutes. When the uncontrolled ship drifted, the waves beat into her, and the ship rocked heavily. As a result of the rolling, she lost at least 40 containers, and more than 74 were damaged. Containers onboard contained, for instance, household goods, building materials, and medical supplies – nothing that has been classified as dangerous goods. During inspections of the ship, heavily corroded securing points for containers on the deck and inadequate lashing arrangements for cargo was found. The Australian Transport Safety Bureau further investigates the case. APL, a CMA CGM subsidiary, will face cargo rescue costs.

In June 2018, the YM Efficiency container ship lost more than 80 containers because of heavy weather conditions, away from the Australian coast. Another 30 containers have been damaged. For several weeks after the incident, tons of debris washed ashore. Over a year later, residents still collected container debris from along the beaches. Medical and surgical articles were part of the lost cargo.

Yang Ming collected some of the debris that went ashore but did not take responsibility for what was below the surface. The company refused to pay the rescue costs, and its sister ship YM Efficiency was arrested while in port in Sydney in February 2020 and hold as collateral against unpaid debts. Around 60 lost containers were located during this time. The Australian Maritime Safety Authority concluded a USD 17 million operation to recover most of these those containers.

What does it mean for the importer?

These are just some of the cases. They show that you cannot fully protect your cargo from accidents at sea. Even if it is not your containers that went overboard, those on the ship may be damaged and the goods inside the container. It is, therefore, important to pay cargo insurance. With this insurance, the importer can receive monetary compensation if the container suffers damage, provided they show the relevant documents. Containers can be insured against adverse weather conditions or a breakdown. Freight forwarder or carrier liability insurance alone is not enough. If the cargo has not been properly insured, all costs, including rescue cost, pass to companies transporting the goods.

Container lost – How much is insurance?

Some companies estimate the cost of insuring the goods at approximately 0.15% of the goods’ value on the commercial invoice and sea freight. The rate can also vary depending on the type of cargo, the goods’ value, and the transport route. If the order is not-so-large, a minimum charge, for instance, $35, may apply.

It is worth remembering that on Incoterms CIF, the seller is obliged to conclude the insurance contract.

Read more about container insurance – why is it worth it to insure a container?

What do the incidents mean to the environment?

Pollution of the marine environment caused by overboard containers is another issue. It has been calculated that, on average, over 1,500 containers go overboard every year. They may be a hazard to sea ecosystems; the containers may contain acid, alcohol, dangerous goods, and manufactured products. They pose not only a threat to the environment but also watercraft and coastal residents.