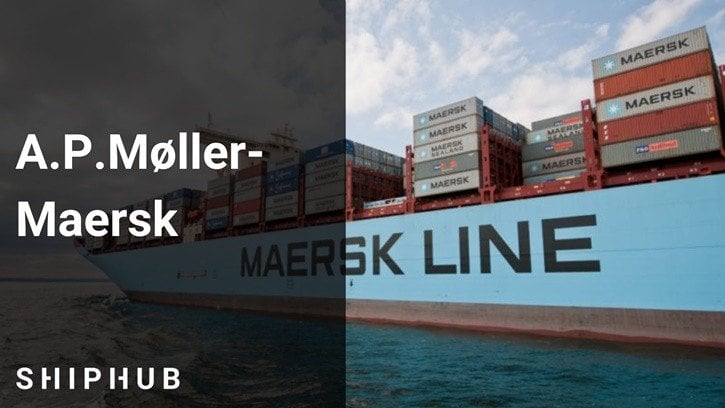 A.P.Møller-Maersk A / S is one of the largest container operators, one of the TOP 9 largest shipowners in the world. The company operates in many business sectors; however, the focus is on transport and energy. The following article introduces the company’s history and shows the operation on the market.

A.P.Møller-Mærsk A/S, also called Maersk, is a Danish company with its headquarters in Copenhagen. It was opened in 1904, and the current president is Nils Smedegaard Andersen.

The company has agencies and branches in over 135 countries around the world, employing more than 120,000 workers.

On April 16, 1904, the first Maersk branch was established in the Danish city of Svendborg as a shipping company Dampskibsselskabet Svendborg. The company was built by the captain Peter Mærsk-Møller and his son Arnold Peter Møller. Despite the enormous difficulties, father and son managed to raise adequate capital for the purchase of a used steamboat. The ship was named Svendborg in honor of the hometown.

In 1912 Arnold Peter Møller created a new transport company “Dampskibsselskabet af 1912” to ensure operational independence. Due to the favorable conditions in forwarding activities during the First World War, the new shipping company has quickly developed. Both companies were managed in parallel until the merger in 2003.

The first shipyard of the Maersk company was built in 1918. They wanted to build ships based on the company’s experience in shipping. However, the shipyard was closed in 2012.

1919 is the time when the company’s first office abroad was opened. It was opened in New York under the name ISMOLCO. In the following years, the company was very successful. In the shipyard, Leise Maersk, which was the world’s first diesel ship was built. It was also a ship that was used on the US-Asia route in 1928.

In 1928, the company opened a new business. The first cruise in the history of Maersk Line took place from Baltimore in the USA via the Panama Canal and the East Coast to Asian ports. It was the only ship that operated on this route until 1947. The first cargo carried by the company were parts for Ford Motor Company cars.

Resume of work after the Second World War

World War II was a difficult time for shipping and caused a stoppage at work. The company resumed its activity in 1946. Maersk Line was once again running between the US and Asia.

Logo – the introduction of a blue background

In 1955, for the first time, the company introduced a light blue color to its logo. The newly built ship Regina Maersk became the first ship to have a painted hull in light blue. The new color was positively received, and in a short time, the entire fleet was painted in this way.

In 1968, the route between Europe and Asia was opened. New, optimized ships with higher capacity began to travel to the Far East.

In the following years, nine container ships that could run between the USA and Asia were created. Transporting goods to other countries increased the need to use the full container space and consolidate freight, thus opened branches in Taiwan, Hong Kong, and Singapore. Maersk Logistics continued its operations.

In 1980, container ships were sent from Europe to Asia, and to control the operations of the company, more agencies and branches were opened in countries previously serviced by external agents.

In 2013, the first Triple-E class container ship was created. At that time, it was the longest ship in the world, about 400 m long with a capacity of over 18,000 20 ‘containers. Triple-E ships are economical container ships that do not emit so much CO2 compared to other ships.

Container shipping is the largest area of Maersk’s activity, providing half of its revenues. Currently, the company conducts logistics and forwarding activities under the following brands: Maersk Line, Damco, and Safmarine.

Maersk has over 50 container terminals around the world.

Since the beginning of the company, Maersk has been guided by indigenous principles, thanks to which the company enjoys trust among its clients. These are:

Constant care – the company thinks for the future, plans, and implements. It gathers information about the environment, looks for new ideas, and introduces interesting innovations.

Humility – listening, learning, sharing, and space for others. The company shows confidence and delegates the rights. It maintains an attitude in which it continually receives an education. It never neglects competitors.

Righteousness – the world is a bond that needs to be taken care of. Openness to what is good and what is bad. Speaking at debates and supporting decisions is one of the main assumptions of the company.

Name – with a passion for reaching higher. Embodying values and spreading a passion for what the company does. Taking care of the image in the eyes of customers and the outside world.

The company deals with loading services. As the largest shipowner in the world, Maersk transports 12 million containers every year to corners around the globe. The company offers solutions for both large and small enterprises, regardless of the industry or transported goods. Maersk transports goods on all possible trade routes.

Maersk also deals with deliveries from start to finish, organizing the entire shipping route. Introduces innovative solutions and technologies to its operations to help the customers control their shipment.

The company, apart from transport by sea, also deals with air and road transport. This ensures fast delivery of goods and excellent product control. Employees always try to find the best and most efficient solutions.

The company received the “Best Shipping Company” award, awarded by Trade Finance Global 2019. Maersk is constantly growing, and for a reason, it is chosen by many importers and exporters.

We also encourage you to read the article in which we explain exactly what the shipowner does and what his duties are.