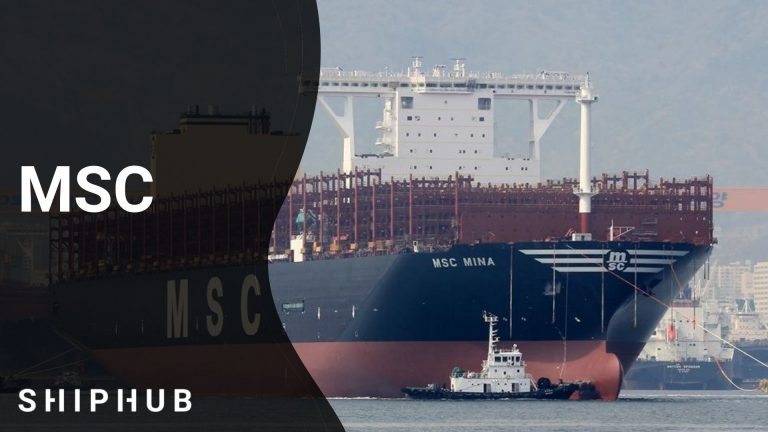 MSC is another of the TOP 9 largest shipowners operating in the world. The company is part of the Cargo Division, a shipping company of the MSC Group, a global transport and logistics company. In the article below you can learn more about this popular shipowner.

MSC (Mediterranean Shipping Company) is the world’s second largest shipping line in terms of container capacity. It was founded in 1970 and has its headquarters in Geneva since 1978. It is a private organization run by the Aponte family.

The most important port for this shipowner is Antwerp in Belgium.

MSC was founded in Naples in 1970. Gianlugi Aponte bought his first ship, which name was Patricia. He then purchased the Rafael ship and thus began shipping between the Mediterranean and Somalia.

The line was then expanded by purchasing more second-hand container vessels. The company also started servicing ships to North America and Australia.

In 1995, the brand also increased its cruise business.

In December 2014, the MSC shipping line took the 6th position on the list of the 100 most-influential people responsible for shipping, prepared by Lloyd’s List.

The company has 480 offices around the world, making it a stable partner for companies from every corner of the globe. The company has upskilled and experienced experts who specialize in many services (including refrigeration, oversize cargo, breakbulk and many others).

The company has a rail, road and sea transport network that enables offering sustainable and reliable door-to-door services around the world.

Besides, the company is committed to promoting the balanced use of marine resources, while intensively investing in the new generation of environmental technologies. They want to minimize the impact of their activities on the environment, oceans, etc.

The company devotes time to getting to know customers and to adapt to their needs. They use their industry knowledge to provide services useful to clients.

One of the companies’ motto is to look after the individual needs of the client, despite the complexity of their business.

The MSC has 510 ships that cover the route on 200 different routes. The company operates on 500 connection ports, and transports over 20 million TEU annually. More than 47,000 employees work in 480 offices located in 155 different countries.

Currently, the company has its own container terminals in Africa, Australia, Brazil, China, Europe, India, the Middle East and the United States.

Currently, the company employs over 70,000 employees in many different job positions and is constantly looking for new people to cooperate with.

We also want to invite you to read the history of the largest container vessel operator in the world – Maersk, in our previous article.