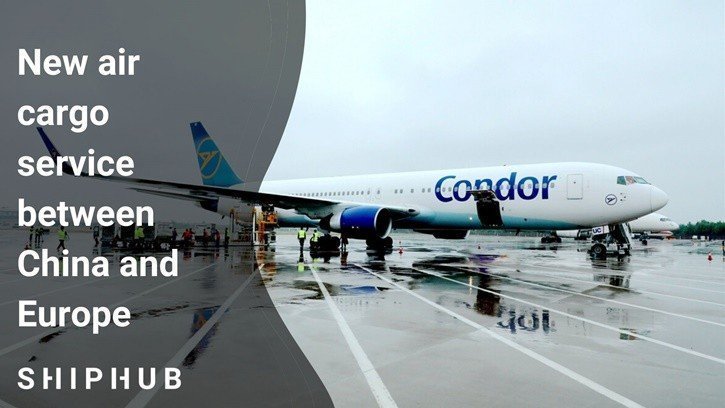 On the 8th of May, an air freighter carrying over nine metric tons of medical supplies took off from Shijiazhuang Zhengding International Airport in Shijiazhuang, the capital of Hebei province. The following day it arrived at Frankfurt Airport in Germany. Thus, a regular air freight service has commenced between the province and European countries. Check more about new air cargo service between China and Europe here.

The freighter, operated by Condor, carried nearly 1,000 boxes of medical products purchased in China. The medical supplies are to be used in Europe in fighting COVID-19. The boxes included such goods as face masks and infrared temperature guns. According to Condor, an airline based in Frankfurt, the service will be provided four times per week.

It is not the first international route to be opened from Shijiazhuang this year. Earlier this year a route to Kyrgyzstan was opened. In January, Shanghai’s YTO Express has launched a three-times-per-week freighter service between Bishkek in Kyrgyzstan and Shijiazhuang. From Bishkek, the goods are transported to Russia, Kazakhstan and other countries via road and rail. Moreover, YTO plans to add services from Shijiazhuang to Seoul and Osaka.

It is expected that even more international routes will be opened. There are planes of opening routes to the Philippines and the Netherlands. It is all for mutual benefits – international freight routes enable domestic enterprises to conduct foreign trade, and the demand meets supply. It is crucial to provide essential articles, such as medical supplies.

The new cargo service launched as an element of Shijiazhuang’s role in the national strategy. By employing the coordinated development of Beijing, Tianjin, and Hebei province, the plan is to turn the province into a significant domestic logistics base. The ultimate goal is to connect more and more cities on the Belt and Road route, as well as solidifying Chinese cities’ positions in the initiative.