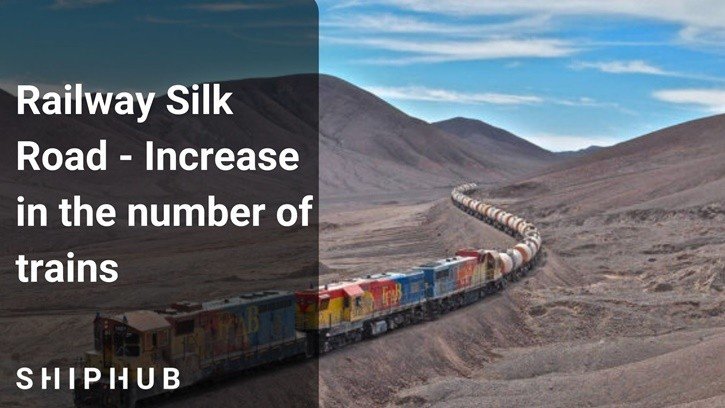 The year 2018 turned out to be satisfactory for the person dealing with the Railway Silk Road. For many companies dealing with rail transport, it was a time to strengthen their position on the market. Besides, the Railway Silk Road was actively promoted by representatives of many companies, and now we can hear about a significant increase in the number of trains on the route.

Chinese trains still turn out to be an unknown product, which is why there is a demand on the market for education in this matter. Mentioning that trains may be a cheaper and faster transport option still raises some doubts. However, there is now a greater interest in this way of transport. In this case, time, as well as expenses, are convincing.

Increase of trains on the Railway Silk Road

The number of trains launched since the announcement of the New Silk Road by President Xi Jinping in 2013 is increasing. According to the Ministry of Commerce of the PRC, more than 12,000 full train compositions to 49 cities in 15 European countries have been launched since the start of the project focused on Chinese trains. Unofficial data for 2018 also says about the launch between China and Europe up to 6.3 thousand trains. This means a definite increase in comparison with 2017.

In the division of trains going from China to the European Union (westbound) and from the EU to China (eastbound), the changes also look impressive:

Also, there is a tendency to balance the number of trains running in both directions. In 2018, the number of trains setting off to China from the European Union amounted to 2,690, which means an increase of 111%, and 3610 trains were launched in the opposite direction (increase by approx.50%).

Will Eastbound and Westbound shipments be wholly balanced in the future?

The most important passage on the Railway Silk Road is undoubtedly Alashankou. The crossing has 45% in the share of individual border stations. From the talks with partners, you can also conclude that the Manzhouli transition (30%) will slowly expire due to the need to form longer trains and frequent congestion.

Due to the heavy load on the Alashankou crossing, it can be expected that the Khorgos port (7%) will be developing very dynamically. Also, Khorgos, thanks to its advanced technology, enables reloading of the entire trainset (41 containers) in an hour. In Alashankou, however, it takes four hours.

How are the individual border crossings used? The figures only apply to travel to and from Europe.

You can also find information on trains running from and to individual stations listed below:

As you can see, Chengdu is the clear leader. However, it should be borne in mind that Chengdu statistics also aggregate rail flows from other cities that are eventually forming into full trains in Chengdu.

Sometimes it is cheaper to organize full-length shipment from the east of China passing through distant Chengdu than driving directly or through another Zhengzhou-type platform. However, this is a changeable issue, and each inquiry is considered separately due to customer requirements and delivery time.

Furthermore, Chongqing and Zhengzhou are very balanced operators. They are very strong and well-organized platforms that have been present in Europe since the start of the Railway Silk Road.

An interesting situation presents itself in subsequent positions. Operators from Wuhan and Xi’an made more trains to China than to Europe. Both platforms contribute to balancing the total number of trains sent from China by importing goods both for their customers and for their online stores offering products from Europe.

The strong position of the Railway Silk Road

Forecasts for 2019 have different outcomes. From increases of 15-20% to increases by 60%. There is certainly no prediction of a reduction in the number of trains. Besides, it seems that intermodal train service from China has settled on the European market for good, and probably even a price increase will not eliminate this branch of transport.