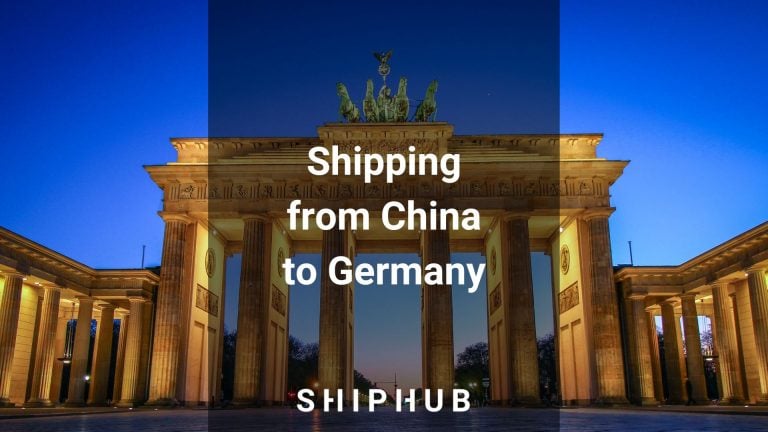 As Germany is in the center of both Europe and the European Union, it is China’s key trading partner. For the last several years, China and Germany have maintained a strong trade relationship. In 2020, China was Germany’s most important trading partner, with total bilateral commerce valued at about 212 billion euro. Both countries emphasize the necessity of promoting open markets and rules-based world trade. In this post, we will present the most popular shipping methods from China to Germany.

Shipping from China to Germany – types of transportation

Both Germany and China have a robust network of railways, highways, seaports, and airports that make shipping goods from across continents an efficient process. Choosing a shipping option depends on several factors, as every option has its advantages and disadvantages. These three shipping options are:

Ocean freight from China to Germany

Ocean freight is the most popular freight option chosen by German importers when purchasing goods from China. It is due to the low shipping costs. Moreover, it enables to ship large shipments, reducing transport costs per unit. When ordering a shipment of 12 pallets or more, FCL (Full Container Load) will be more advantageous. On the other hand, LCL (Less Than Container Load) is usually chosen by importers with smaller shipments (usually between 1-15 cubic meters in a container). As there is a need to manipulate the cargo along the way (consolidation and deconsolidation), LCL shipping takes slightly longer than standard FCL shipping.

Unfortunately, a significant disadvantage of ocean freight is the transit time. Containerships sailing from China to Germany usually start their journey in the South China Sea before sailing through the Indian Ocean to the Atlantic Ocean. This journey may take up to 45 days. The transit time depends on the port of arrival and the chosen form of transport (FCL or LCL).

Major seaports in China and Germany

Below we listed the main cargo seaports in China.

Two main seaports in Germany handle most of the cargo from China.

Air freight from China to Germany

Airfreight is the fastest form of shipping freight available. It is the best option when shipping perishable shipments or smaller orders (smaller than three pallets). For example, shipments from China can arrive in Germany in around 5-8 days by air. Additionally, air freight is safer than the ocean freight. Therefore, it comes at a high price.

Express shipping is an all-included service that combines logistics and transport, making it even faster than standard air freight. Door-to-door shipping via express shipping will take as little as 1-4 days. However, because of the higher costs, it is mainly recommended for small shipments, like samples.

The are several big cargo airports in China.

Rail freight from China to Germany

Rail freight is an ideal shipping option when transporting large shipments (both FCL and LCL). It is cheaper than air freight and faster than ocean freight, making it the ideal middle-ground between the two. The rail transit times from China to Germany vary between 15 to 18 days.

While rail freight is a popular shipping option in Europe, it is still a relatively new option for importing goods from China. The Chongqing-Xinjiang- Europe line is the main rail freight route from China to Germany, which starts its journey in Southwestern China, crossing Kazakhstan into Europe.

There are five main railway terminals in China that dispatch goods to Europe.

The two main railway terminals in Germany are Duisburg and Hamburg.

As Germany is a part of the European Union, all products imported from non-EU countries need to adhere to the Union’s strict laws and regulations. It means that goods imported into the EU must have all the necessary certificates. One of the most important marks is the CE marking which means that the product complies with the EU’s directives. In addition, all imports are inspected by German Customs officials before officially entering the country. Import taxes will also need to be paid depending on the product’s category.

Additionally, EU member countries drew up a list of prohibited imports. These restrictions are often placed to protect local manufacturers or limit the import of products that may pose a health risk to the country’s population. Currently, this list includes:

To get the complete list of prohibited goods, visit the TARIC website (Integrated Tariff of the European Union). It contains all current information related to EU customs regulations.

Before choosing the forwarder, we recommend comparing many offers. On ShipHub, you can quickly receive an in-depth quote on your international shipment, which will allow you to compare offers from various verified carriers.

Read our other guides on shipping to Germany: