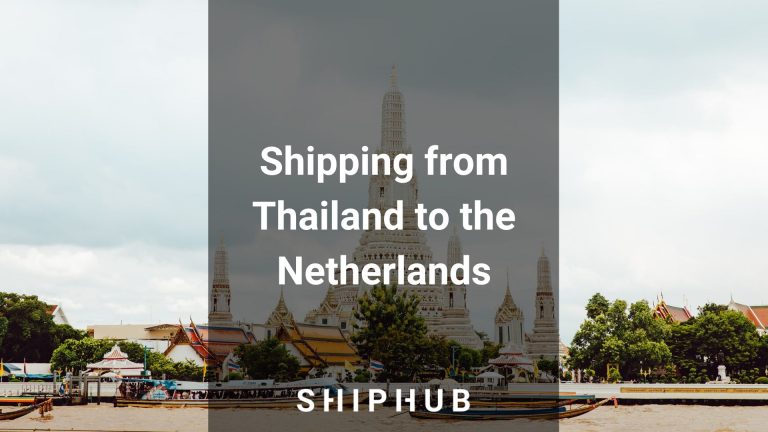 As one of the most attractive emerging markets, Thailand is predestinated to play a more significant role in the world’s economy. The Netherlands’ strategic location and convenient logistics network make the country a perfect economic partner. Thailand’s main export to the Netherlands consists of goods, such as computers and parts, electrical equipment, rubber products, lens, motorcycles and parts, machinery and parts, air conditioning, prepared poultry, meat, and animal parts. This article discusses the best ways of shipping from Thailand to the Netherlands.

Shipping from Thailand to the Netherlands – means of transport

Sea freight from Thailand to the Netherlands

Sea freight is the most popular way of shipping goods in international trade for various reasons. The main advantages of sea freight are its relatively low price and tremendous carrying capacity. The downside is that the delivery time is moderately long. Usually, it should take around 35 days (45-55 days in case of door-to-door delivery), depending on additional factors.

Sea transport is divided into two main categories: FCL and LCL. Full Container Transportation means that one sender/receiver rents the entire container. In the case of the Less Container Load, several entrepreneurs share one container’s space. The LCL transit time is slightly longer than the FCL because the package needs to be consolidated.

Airfreight from Thailand to the Netherlands

Airfreight would be a good option for delivering goods that are required as soon as possible. Moreover, it ensures the safety of the delivery process. Those qualities make airfreight perfect for transporting fragile goods, such as food, jewelry, luxury items, pharmaceutics, or flowers. Unfortunately, it all comes at a price. Airfreight is way more expensive than a regular delivery via sea. The estimated delivery time when using airfreight should be around three working days.

Main cargo airports in the Netherlands:

Shipping costs from Thailand to the Netherlands

The final cost of shipping will depend on various factors, such as shipping distance, the way of transport, cargo specification, taxes, and the chosen forwarder. Because of it, we highly recommend comparing different offers to find one that suits your needs the best. You can easily do so on our website ShipHub.co. After filling in the form on our home page, you will get an in-depth quote from verified forwarders.