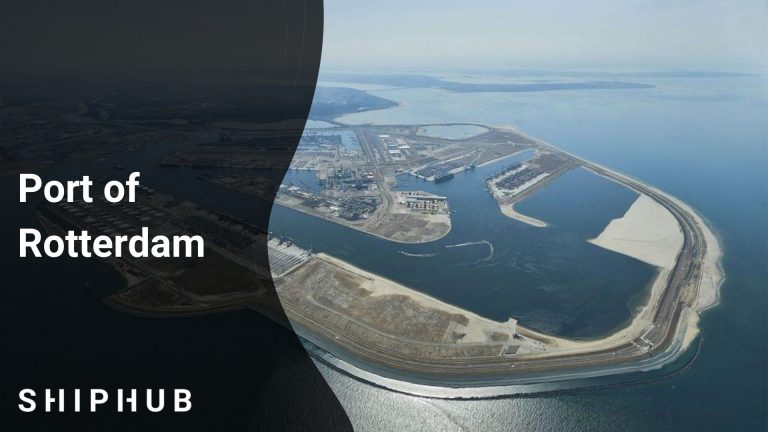 Port of Rotterdam is the largest seaport in Europe. It owes its leading position in the EU and worldwide to its exceptional accessibility, even for the largest seagoing vessels. In addition, the port’s infrastructure enables the distribution of all kinds of cargo.

Moreover, the port provides direct and indirect employment for around 385,000 people in different companies throughout the Netherlands.

Even though Port of Rotterdam is a universal commercial port where all types of cargo are being transshipped, it mainly attracts customers from sectors such as transport and logistics, chemical, refining, and energy industries.

Discovering the seaway to India in the 17th century led to a boom in sailing and trade, and thus to the development of Rotterdam. In 1872, a new fairway connecting Rotterdam with the open sea was built. It ensured the strong position of the port in international trade and its further development.

In 1940, the city was bombed by Germans. The warfare caused almost one-third of the port facilities to be destroyed. The Port of Rotterdam regained its pre-war position only after 10 years.

Throughout the years, the port has been constantly expanded. The territory of Port of Rotterdam was extended by the creation of the Europoort complex (the so-called “gateway to Europe”) along with the mouth of Nieuwe Waterweg. In the 70s, in the effect of the completion of the Maasvlakte, the port became extended to the seaside on the southern bank of Nieuwe Waterweg estuary. In 2008, construction of another extension – Maasvlakte 2 – began. It was put into operation in 2013.

Port of Rotterdam had long held the position of the busiest port in the world, and at the same time accommodating the largest oceangoing ships. This status was maintained from 1962 to 1986. The port was later overtaken by ports in Singapore and Shanghai.

In 2018, a high level of investment was recorded in Port of Rotterdam. Its gross value increased by 91 percent compared to 2017 (up to 408.2 million euros, which is the highest value since the construction of Maasvlakte 2).

The Port of Rotterdam authorities are involved in fighting climate change and intend to play the leading role in the global energy transition. The reduction of CO₂ emissions and efficient use of resources and residues are important tasks for the managing body of the port. Measures are being taken to harmonize the port with the Paris Climate Agreement.

More about the port

According to statistic data, about 40% of goods imported to Europe (not only by sea, but also by rail, road, or river) are unloaded in Rotterdam. The Meuse and Rhine rivers provide perfect access to the Netherlands and reach as far as Basel or France.

Another interesting tool is the Navigate system, which connects the Port of Rotterdam with different ports of the world digitally. The system assists searching for more suitable and time-effective rail, road, or sea connections available to and from a given port. For the Polish port in Gdańsk, the service is available on the website.

Shipping companies operating in the port