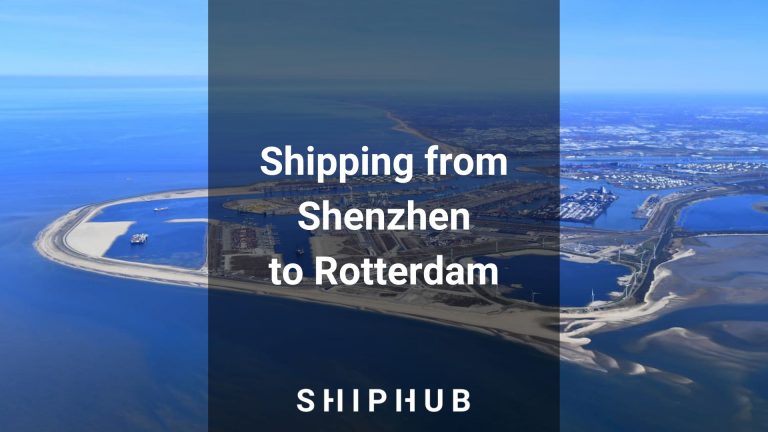 The Netherlands is said to be the “gateway to Europe,” and its role in logistics is crucial. With its largest port in Europe, the port of Rotterdam, the Netherlands is one of the most important trade destinations on the continent, and its economic ties with China are getting stronger. In 2020, China’s export to the Netherlands reached almost $65 billion. The most popular products were broadcasting equipment, computers, and office machine parts. This article will look into shipping from Shenzhen to Rotterdam.

Shenzhen is the third largest container port in the world and one of the biggest ports in China. The port of Shenzhen is not just one “place,” like the port of Rotterdam, but it is a cluster of different ports located on the Shenzhen coastline. The coastline has 260 kilometers and is separated by the Kowloon Peninsula, so the area has two areas: the Easter Port and the Western Port. The port of Shenzhen has about 130 international container roads for 40 companies situated around and in the port.

The Port of Shenzhen can handle various ships: container ships, cargo, tankers, and bulk carriers. It usually depends on port and terminal as not every port in Shenzhen has the facilities to handle every ship type.

The port of Rotterdam is the biggest and most important port in Europe. The port’s area is about 100 square kilometers with an extension of 40 kilometers. The terminals in the port of Rotterdam are operating 24/7, not only for typical cargo ships but also for mega-ships. The port’s draft has exactly 24 meters, making it one of the two available locations for one of the largest bulk cargo ships in the world – the second location is the Terminal of Ponta da Madeira in Brazil.

The port of Rotterdam can handle various ships, which are containerships, dry bulk cargo, liquid bulk cargo, LNG, and breakbulk carriers. Its versatility makes it the only port in Europe that can handle many types of ships. The port of Rotterdam is a great choice not only for cargo ships but also for cargo trains or trucks. You can transport your goods by rail, road, and river as in 2007 the railway link between Netherlands and Germany was opened.

Shipping from Shenzhen to Rotterdam

Many sea routes cover both Shenzhen and Rotterdam ports, so you can conveniently ship your goods.

As the port of Shenzhen is scattered along the shore, you can choose the exact port of exit. You can either use the biggest terminals in Shenzhen – Yantian, Nanshan, or Da Chan Bay – or the smaller ones, which are not as congested as aforementioned.

Port of Rotterdam is called the “gateway to Europe” for a reason. It is the biggest container port in Europe that enables shipping to many ports around the world. The water is over 14 meters deep so that the port can accommodate even mega-ships. The port of Rotterdam is the only European port with such facilities.

The transit time from the port of Shenzhen to the port of Rotterdam is approximately 22 days. As the sea shipping routes are constantly improving, new ones have been opened in recent years. The Northeast Passage is a shorter line between Asia and Europe, allowing ships to travel via the Arctic. It is 12 days faster than the typical route through the Indian Ocean or Suez Canal.

However, if you need your shipment to be delivered quickly, consider choosing airfreight. Your goods will arrive in 3-5 days, but you need to remember that the freight rates are much higher compared to sea transportation.

Find out more about shipping from China to the Netherlands.

Generally, you are not limited by ship types when shipping from the port of Shenzhen to Rotterdam but bear in mind that not every port in Shenzhen handles every ship type. If you do choose container shipping, check multiple freight forwarders’ offers. You can easily do this on ShipHub.co, where you can request free quotes for rail, air, and sea shipping.