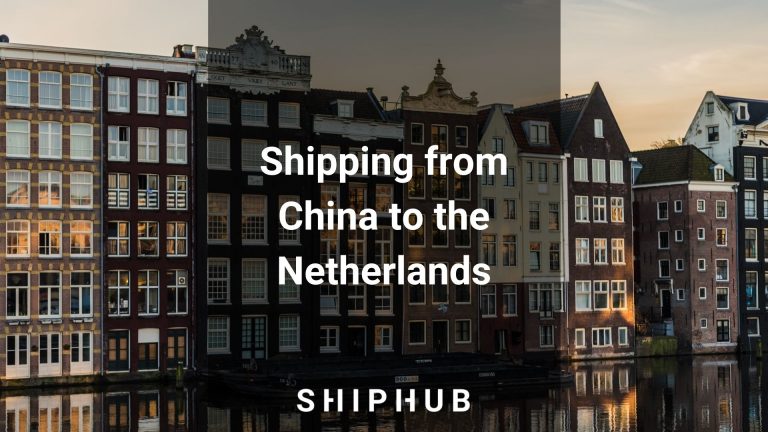 In the last decade, trade between China and the Netherlands grew substantially. The Netherlands is one of the most important transport hubs in Europe, largely thanks to the Port of Rotterdam, and is sometimes even referred to as the “gateway to Europe.” Besides sea and air freight, rail freight is also an option, making cargo shipping between the two countries more affordable and faster than ever. There are plenty of options when it comes to shipping from China to the Netherlands.

Shipping from China to the Netherlands

Airfreight from China to the Netherlands

Airfreight is undoubtedly the fastest and safest way of shipping cargo. You can choose between regular and express shipping, the latter being more expensive. Door-to-door shipping usually takes 3 to 5 business days.

Some carriers on this route are KLM Airlines, Air China, China Airlines, and Lufthansa Airlines.

There is a wide variety of airports in China, and the largest are located in Beijing, Hong Kong, Guangzhou, and Shanghai. In the Netherlands, the best options are Amsterdam, Eindhoven, Groningen, and Breda International.

Shipping from China to the Netherlands – sea freight

In recent years, a new route was opened between China and the Netherlands, enabling shipping cargo through the Arctic. This route significantly cut down the shipping time and made sea freight even more beneficial.

Shipping goods by sea is the most affordable out of the three options, but it also takes the longest. Still, many importers choose sea freight. There is a wide range of ports and companies that operate the route.

There are plenty of seaports in China, and a lot belong to the largest in the world. Some of the most essential are located in Shanghai, Shenzhen, Ningbo, and Qingdao.

The Netherlands, on the other hand, is home to the largest port in Europe: the port of Rotterdam. A good deal of products shipped to the old continent would likely go through this port anyway. It is convenient to ship by sea as there are major seaports on both sides.

There are plenty of companies that operate transports between the countries, such as A.P. Moller-Maersk, MSC, CMA CGM Group, COSCO, and Evergreen Marine.

Shipping by sea from China to the Netherlands usually takes from 20 days to over a month; here are some example routes with expected travel time:

Transporting cargo by train became an option only recently and offered more variety when choosing how to ship products. It is a good compromise between air and sea freight – it is faster than sea freight, and consequently more expensive – but not as expensive as airfreight.

Trains mainly ship products in containers, and this method is said to be one of the safest options for transporting. The entire journey takes about 15 days.

In China, the cities of Qingdao, Tianjin, Ningbo, Shanghai, Shenzhen, Xiamen, and Yiwu offer the transcontinental journey. In the Netherlands, the stops are the cities of Amsterdam, Rotterdam, and Tilburg. Another option is to send the cargo to the German cities of Hamburg or Duisburg and transport it further from there. Read more about China-Netherlands rail freight.

Customs clearance in the Netherlands

When importing to the Netherlands, make sure to familiarize yourself with the regulations and procedures during customs clearance – they are usually similar or the same as those in other EU countries.

The Netherlands, however, does not allow for the import of some specific products. Among them are products harmful to the environment and resources such as ammunition and weapons, motorcycles and cars, medicines, pets, and protected species of flora and fauna.

How much does shipping from China to the Netherlands cost?

The fee largely depends on various factors, such as the type of cargo, size, and transport method. Shipping fragile goods cost more because of the extra needed care and insurance; the same is true with fresh products requiring special refrigerators. Such factors, as well as the size and weight of the cargo, come into play when choosing the transport method.

To receive a detailed valuation of shipping from China to the Netherlands, you can send a form through ShipHub. This way, you can compare the prices of all the shipping methods and find out what would be most beneficial for a specific kind of cargo. Here are examples of filled forms for the route:

Shipping from China to the Netherlands – summary

In summary, thanks to the introduction of new transport solutions, trade between China and the Netherlands became more beneficial than ever. Cargo can be easily shipped by either air, sea, or rail, which offers a wide variety of options for different types of cargo and budgets.