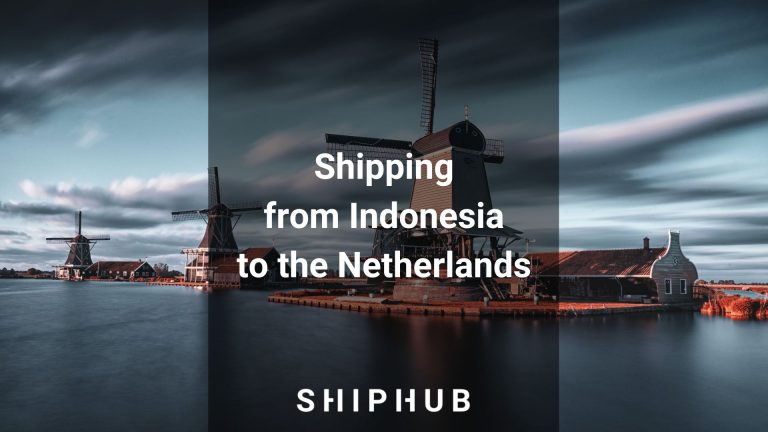 Indonesia, a country of 270 million people, is the largest economy in Southeast Asia, with a GDP of $3.246 trillion in 2021. It has proven to be a profitable market. The country has made significant efforts to strengthen its import and export procedures as it strives to become the world’s fourth-largest economy by 2045.

The EU-Indonesia connection has also become stronger in recent years. Negotiations for an EU-Indonesia Free Trade Agreement (FTA) were initiated on July 18, 2016. So far, eleven rounds have been held.

Shipping from Indonesia to the Netherlands – means of transportation

Sea freight from Indonesia to the Netherlands

Ocean freight is essential to Indonesia’s trading infrastructure, transporting approximately 90% of internationally traded goods. It is affordable and allows importers to be more flexible in terms of cargo size. However, it is vital to remember that it is also the slowest mode of transportation. The expected arrival time is determined by the number of ports visited by the ship on its route to the destination. For example, the route from Jakarta to Rotterdam in the Netherlands takes 39 days. As a result, it is the best option for delivering items with a long expiry date that do not require special handling.

There are two possibilities for ocean freight: Full Container Load (FCL) or Less than Container Load (LCL). FCL refers to using the entire capacity of the container and is recommended for cargo that takes up a lot of space, while LCL refers to the practice of sharing a container with other importers/exporters.

Indonesia is the world’s largest island country, and its economy is primarily reliant on international trade through its ports. Indonesia has around 2000 ports, the majority of which are handled centrally. Its busiest and most advanced seaport is Tanjung Priok in Jakarta. It carries more than half of Indonesia’s trans-shipment cargo traffic.

As previously stated, the ports of the Netherlands serve as global entrances to European markets. Its principal ports are strategically located on the open sea as well as at the confluence of three important European rivers, the Rhine, the Maas, and the Scheldt. The location creates simple shipping options for enterprises operating in the Netherlands and throughout the European Union.

Rotterdam, Europe’s largest seaport, is located on the North Sea coast. The port of Rotterdam, Europe’s largest seaport, is vital to the country’s economic prosperity since it is located in the middle of Europe’s heavily industrialized and populated trade triangle, which includes the German Ruhr sector, Paris, and London. It is strategically located on one of the busiest marine commerce routes and serves as a distribution center for commodities bound for inland European countries.

Main cargo ports in the Netherlands:

Airfreight from Indonesia to the Netherlands

Airfreight is unquestionably faster and safer than the ocean freight. The travel time is short because the cargo aircraft flies directly to its destination, making it more expensive. Because cargo airplanes have limited space, many choose it when delivering high-value and smaller-sized goods. Thus importers must be more mindful of this when selecting air freight as a mode of transportation for their products. It is the perfect transportation method to ship time-sensitive goods.

Amsterdam Airport Schiphol is the country’s primary international airport. It is located in the municipality of Haarlemmermeer in the province of North Holland, 9 kilometers southwest of Amsterdam. In terms of international passenger traffic, it is the world’s third busiest airport in 2021.

The longest air freight routes from Indonesia connect Jakarta’s airport with destinations in Western Europe. The transit time for cargo aircraft from Jakarta to Amsterdam is 14 hours.

Main airports in the Netherlands:

Shipping from Indonesia to the Netherlands – freight rates

Freight rate is determined by various factors, including the shipping method. To find out how much shipping will cost, contact freight forwarders, who will provide prices based on the size and type of cargo. ShipHub.co is a fantastic website that allows you to quickly check freight prices for your cargo without making any phone calls.