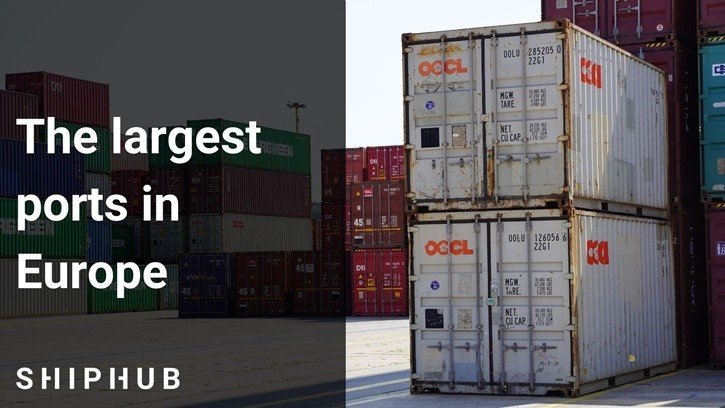 Sea transport is a very often chosen method of transport both during import and export. Significant seaports, which will be able to accommodate larger container ships, are being created all over the world. In the article below we are presenting the largest ports in Europe.

Seaport of Rotterdam – The largest ports in Europe

It is the largest and at the same time, the most significant harbor in Europe. The port area is 105 km2. The port is located on the North Sea in the Rhine-Meuse Delta. From the 1960s to 1986, it was the busiest port in the world. Then his position on the list was taken by the Port of Singapore, and then by the Port of Shanghai.

In this Dutch port are handled all types of goods. In 2016, a total of 12,4 million TEU loads were transshipped.

The maximum depth in the port is 24m, thanks to which the harbor of Rotterdam can accept the largest ships in the world.

It is one of the fastest-growing harbors in Northwestern Europe and one of the largest ports in Europe. It covers an area of 13 thousand hectares and employs over 150,000 people.

Recently, thanks to conversions and investments, the harbor can service the largest ships in the world with a total capacity of over 20 thousand TEU. In 2016, 10 million TEU cargo was transshipped at this seaport.

The Port of Antwerp has one of the best locations in the center of Europe, which makes it a very convenient place for transshipment. The Belgian authorities pay special attention to the petrochemical industry, where they see higher profits.

The Port of Hamburg is the largest German port. It is also often referred to as the “Gateway to the World.” Container terminals allow about 12 million TEU to be reloaded every year. According to data from 2016, 8,9 million TEU was transshipped at the harbor. The official date of establishing the port is May 7, 1189.

All container terminals are equipped with integrated railway terminals, which positively affects the leading position of the port in Hamburg.

Further investments are planned to allow the largest container ships in the world to enter the port.

In 2016, 5,5 million TEU was transshipped there. Besides, it was also one of the largest hubs for car transport around the world.

It is the largest port in Spain and one of the largest harbors in Europe. The terminal is the property of APM Terminals. The port covers over 68 ha and contains quays with a bottom depth of 14 to 16 m. There is space for 10476 containers.

4,7 million TEU was transshipped at the port in 2016, thus overtaking the Port of Valencia.

The Port of Valencia is one of the largest Mediterranean seaports. According to the data from 2010, the annual port capacity was 4,2 million TEU. The port’s total storage area is 1,2 km2.

Besides, the port is a very important employer, employing over 15,000 employees who provide services for over 7,500 ships every year. The Port of Valencia is the center of economic activity in the area of influence covering a radius of 350 km.

Construction and development of the Port of Havre began in 1517 when the city of Le Havre (France) was founded. The port officially began operating in 1524. The purpose of the town was to develop trade, which hence the decision to build a port. Port of Havre has a special artificial quay called Port 2000. It was built for cargo handling. There are three terminals on the artificial coast: the Terminal de France, the Terminal Porte Oceane (TPO), as well as the TNMSC Terminal.

In 2018, almost 3 million TEU of cargo was transshipped at the port.

The Port of Trieste is an international hub for both sea and land transport. Mainly Eastern and Central European markets use this port. The port is on the Italian-Slovenian border. It is the northernmost port in the Mediterranean.

In 2017, over 1 million TEU cargo was transshipped at the port.

There is also a railway network in the port area that connects it to the national and international network.

The Port of Trieste discussed in this article has the status of a free port.

The Port of Gioia Tauro is located in the south of Italy and is also one of the largest container seaports in Europe. It is located on one of the busiest sea corridors in the world (route connecting Suez and Gibraltar).

The port has seven loading docks. 3,000 ships call at the port every year. In 2018, over 2 million TEU was transshipped at the port.