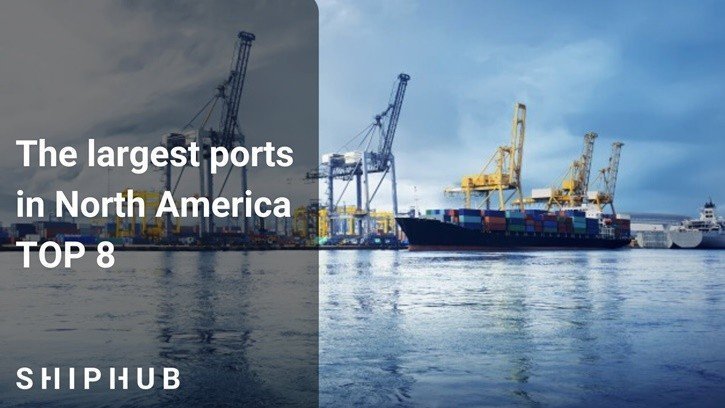 Maritime transport plays an important worldwide role, including in the US. The article presents the largest ports in North America with brief descriptions. Although the US economy is considered one of the most powerful in the world, the largest US port is only in the second ten on the list of the largest seaports in the world.

Port Los Angeles is the largest port in North America. The whole complex covers 30 km2 and stretches over 70 km of the coast. It was created in 1907.

It is the largest port in the United States in terms of container traffic, amounting to about 9.7 million TEU in 2018.

The main goods that arrive at the port are furniture, toys, footwear, clothes, as well as electronic equipment. However, mainly textiles, feed, paper products, scrap, and soy are exported.

The port’s partners who ship the most goods to Los Angeles are primarily China, Japan, Taiwan, South Korea, and Thailand.

The second-largest port in North America is located about 30 km south of the Port of Los Angeles. The port covers an area of ​​over 12 km2. It has 80 quays and 71 cranes that deal with container handling.

The main partners of the port include primarily East Asian countries.

The port is known for its approach to ecology and caring for the environment. It is the leader among ports in this matter.

New York & New Jersey Port is the largest port on the East Coast. It is also the third-largest transshipment port in the United States.

The port covers an area of ​​almost 4 km2. There are seven freight ports under the management of the complex authorities and a number of privately owned terminals. The port complex is the most important in the USA when it comes to reloading cars and one of the most important when it comes to reloading goods such as bananas and cocoa. Beverages, vehicles, and plastic are usually imported from the New York & New Jersey Port. The main export products were mainly goods such as wood pulp, plastic, and machinery.

The port of Norfolk is in Virginia and is managed by the Virginia Port Authority. It was established in 1965.

The Norfolk terminal has five berths for ships that carry containers. The port is constantly developing and increasing transshipment capacity.

Port of Houston was founded in 1909 on the Galveston Bay.

Approximately 2.5 million TEU of cargo was transhipped at the port in 2018.

Bulk cargo, i.e., crude oil, coal, and steel, can be handled at the port. During the civil war, the port was destroyed. Since 1942 it has received support, thanks to which it has been gradually developing.

Approximately 2.2 million TEU cargo was transhipped at the port in 2018.

Import from Charleston to Gdynia usually take 26 days. However, it takes 20 days to export from Gdynia to Charleston.

The port of Baltimore is in Maryland. The Maryland Port Administration operates it.

1 million TEU of cargo was transhipped at the port in 2018.

Import from Baltimore to Gdynia takes 22 days, while export from Gdynia to Baltimore takes 28 days.