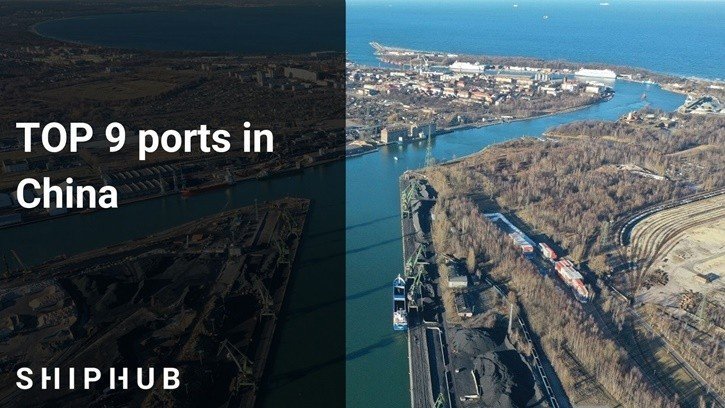 According to World Shipping Council data from last year, seven of the ten biggest seaports in the world are ports in China. Certainly, without such huge ports that could accommodate big ships with cargo, trade with China wouldn’t be as developed as it is now. Check where the ports are located in China.

Choosing the right port isn’t an easy decision, so we have prepared for you a description of the largest and most important ports in China. To simplify, we also inserted a map with selected ports. Check out what the ports in China look like.

It’s the biggest seaport in the world, ranking in first place since 2009. The Port of Shanghai was opened in 1842. It is located in the Yangtze River delta. The port also has an ideal geographical location, excellent economic facilities, and excellent infrastructure. The location in the middle of the longest eastern coast, as a result gives it great opportunities. In 2014 Port of Shanghai set a new record, supporting 35 million TEU (a unit of capacity often used for ports and ships). Every month, over 2000 ships arrive in the harbor. The port of Shanghai also includes three main work zones – Yangshan Deep Water Zone, Huangpu River, and Yangtze River.

Ports in China – Port of Shenzhen

It’s the second most important port in China and the third in the world. It is located in the southern part of the Pearl River, in Guangdong province. The port of Shenzhen is also one of the busiest and fastest growing ports in the world. It has excellent developments opportunities. Furthermore, it notes steady increases. People consider it as a back-up in trade between China and Hong Kong. It is one of the most important ports for Chinese international trade.

More about port of Shenzhen

About 40 companies, which have headquarters in Shenzhen have opened about 130 global container lines. Shenzhen has also the largest number of international routes in China. The name of the port is the name for several large ports in Guangdong. The port within its borders has such terminals as Shekou, Yantian or Chiwan. It is a vast area with a length of 260 km of coastline.

It is a deep-sea port located in the South China Sea. It is a key factor in the economic development of Hong Kong. Deep water makes the port have ideal conditions for mooring and servicing all types of ships. It is one of the busiest ports in the world, both in terms of transported loads and transported passengers. This fact makes Hong Kong a symbol of container transport.

More about port of Hong Kong

The port has many times appeared in the first place in the list of the largest ports in the world. However, it is claimed that soon other ports will have a chance to overtake Hong Kong in the rating, due to declines in the number of containers being reloaded. Most ships travel to the north of the continent. Presently, the port of Hong Kong has nine container terminals located including terminals in Kwai Chung, Tsing Yi, and Stonecutters Island.

It’s the busiest port in the world in terms of cargo tonnage. The port is located in Zhejiang Province, south of Hangzhou Bay. In 2014, Ningbo exceeded 20 million TEU for the first time. It is the only port that recorded such a significant increase compared to the previous year (12%). In past years, it was much less than 20 million. The port accepts supplies of raw materials, cargos, and finished products from North America, South America, and Oceania.

More about Port of Ningbo

Ningbo is also located in the fastest growing in terms of investment and economic area of China, called the ‘Golden Triangle’ or ‘the lower part of the Yangtze River.’ For this reason, it is also an important place for inland waterway transport. The port of Ningbo includes several ports, including Beilun (seaport), Zhenhai (port estuary) or the old port of Ningbo (inland river port). Even more, the coastline of the port is 333 km long.

The port of Guangzhou

It’s the main seaport in Guangzhou, in the Guangdong province. The port is operated by the state-owned company Guangzhou Port Group Co. Ltd. Despite the unfavorable geopolitical conditions, the port continues to record a steady increase in terms of the number of containers handled. Described as ‘part of the Silk Route of the Sea’ from the third century, during the reign of the Qin dynasty, it was an important trade port.

More about port of Guangzhou

Currently, it also connects Guangdong province with other regions of the world. According to the data, in 2010 over 411 million tons of cargo were transshipped there. Ships from over 300 ports from around 80 countries arrive at the port. The Guangzhou port is also a transport hub for industries located in neighboring provinces such as Guangxi, Yunnan, Hunan, Hubei, Sichuan Guizhou, and Jiangxi. The port handles loading, unloading, storage as well as container transport. Transported in the seaport are coal, oil, grain, fertilizers, steel, cars, and ores, among others.

It’s a port located on the Yellow River, near Qingdao, in the Shandong province. The city is also famous and develops thanks to the trade and fishing port. The location on the Jiaozhou Bay also contributes to this. In 2014, the port handled 16.6 million TEU. In 2011, along with three other ports, a strategic agreement was signed with the largest port in South Korea – Port of Busan. Furthermore, the signed alliance aims to create the most significant logistics and transport center in North East Asia. The Qingdao port also has plans to become a local leader. Currently, they are transporting mainly coal, mineral oil, iron ore, and grain. They are also carrying people. The port has relations with over 450 ports, located in around 130 countries.

It’s the biggest port in northern China. It’s often called “the gate of Beijing.” Port of Tianjin has played a significant role since the fourth century. In 1860, it officially became a port of international importance. It is located on the Bohai Bay. It is also the biggest port created by man in China. The port occupies an area of 107 km2 and a quay with a length of 21.5 km. In 2010, over 413 million tons of cargo were transshipped there. Port, annually is handling over 13 million TEUs.

More about port of Tianjin

The port supports ships from more than 600 ports, located in 180 countries. Approximately 115 regular container lines serve it. Every year, there is a systematic increase in cargo. Indicators are growing at a surprisingly fast pace. In 2015, government established one of the three experimental free trade areas. Furthermore, by 2020, they want to create more.

Ports in China – Port of Dalian

The port was established in 1899. It is located in the Liaoning province, on the Liaodong peninsula. It is the northernmost port in China, where water doesn’t freeze. The port also has over 80 berths. At 50 of them, ships with a cargo of over 10000 tones can be moored. The port mainly reloads mineral oil, coal, grain, and refined oils. In 2010, 313 million tons of cargo were unloaded at the port. Ships arrive in Dalian from over 300 ports from 160 countries. Over 90 routes of traders (both global and local) pass through the Dalian port. It is the second largest transshipment hub in China.

It is a port situated along the estuary of the Jiulongjiang River in the south of Fujian Province. The port has connections with over 60 ports in 40 countries and regions. Due to the location, cooperation with Taiwan is very important here. The port has been modernized. Currently, it is adapted not only to tourism but also to transport people, transshipment, transit, and trade. There is also a railway line within the port.

More about port of Xiamen

On average, 469 ships arrive at Xiamen port each month. It’s one of the most important port in China. It is equipped with all types of unloading machines and equipment, as well as modern cranes, harbor cranes, etc. The main loads are cement, chemical fertilizers, sugar, wheat or coal.

Before choosing the right port, it’s worth getting acquainted with the costs and delivery time. Depending also on the location, the parcel may go shorter or longer.

For European enterprises, it usually takes about 30 days. Due to choosing the door-to-door option, the delivery time can be increased up to 45 days.