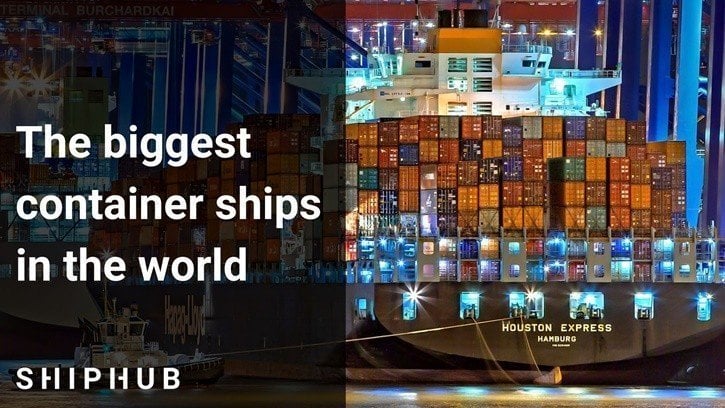 Containers, as everyone probably knows, are ships intended mainly for container transport. Due to the increase in the popularity of bulk carrier and the development of trade relations between many countries (including China), there is an increasing interest and demand for container ships. Even more, for many years, attempts have been made to create ever larger ships to transport as many goods as possible. So how does the list of the biggest container ships in the world look like?

CM CGM is a French transport and forwarding company that has been producing some of the largest container ships in the world for many years. The company was established in 1978. To clarify, it is a leading global shipping group, which is using around 200 transport routes between 420 ports in 150 different countries. The company’s headquarters is in Marseille. The global presence of the company and efficient ships, such as CMA CGM BOUGAINVILLE, enabled the CMA CGM Group to transport 18.95 million TEUs last year.

4. The biggest container ship of the Danish company Maersk

Maersk, actually A.P. Møller-Mærsk A / S is a Danish public company, operating in various business sectors, mainly in the field of transport and energy. It is one of the largest container ship operators in the world. First of all, the company was established in 1904 and has its headquarters in Copenhagen, and its branches are located in over 135 countries. Container shipping provides the company with more than half of its income annually. Maersk has also over 550 ships with a capacity of 2.2 million TEU operating worldwide.

China Shipping is a transport company founded in 1997, under the direct management of the State Council of the People’s Republic of China. In December 2015, the company merged with the larger, member-owned partner of the COSCO Group. Currently, the company is also known as China COSCO Shipping. The merger was the result of China’s reform of the state-owned enterprise. The container shipping company has its headquarters in Shanghai. The company also intended to increase the capacity of its fleet to 2 million TEUs in 2018. Thanks to this, the company became the third container carrier in terms of capacity in the world.

The largest container ship produced by China Shipping is MV CSCL Shipping, designed to cover routes between Asia and Europe. It was put into use in November 2014 and at that time became the largest container ship in the world. The container ship is 400 m long and 59 m wide. The ship can hold 19,100 TEU. Hyundai Heavy Industries built it in a South Korean shipyard in Ulsan. The container ship has a 17 m high engine. At that time it was the largest ship engine ever built. It has been designed in such a way as to maximize fuel consumption while reducing noise and carbon dioxide emissions. The maximum speed that can be obtained at sea is 22 knots.

MSC Mediterranean Shipping Company S.A. is currently the second largest shipping line in terms of container capacity in the world. It is a Swiss company that has its headquarters in Geneva. The most important port of the MSC is Antwerp in Belgium. The company was founded in 1970. The shipping line operates on over 200 sea trade routes, calling at over 315 ports.

MSC is the largest container ship of MSC, put into service in January 2015. He held the first position in the ranking of the largest container ships until 2017. MSC Oscar has a name from  Diego Aponte’s son. Diego Aponte is a president and general manager of the owner of the Mediterranean Shipping Company (MSC). A South Korean company built the container ship for 140 million dollars. The ship was supposed to have a capacity of 18 400 TEU. However, the final capacity was 19 224 TEU, including a space for 1 800 containers. The main engine of the ship is a two-stroke diesel engine.

1. OOCL and the biggest container ships of the company

OOCL and Orient Overseas Container Line is a company providing container transport and logistics services in Hong Kong. It was founded in 1969 and has offices in 70 countries. OOCL links Asia, Europe, North America, the Mediterranean Sea, the Indian subcontinent, the Middle East, Australia, and New Zealand. On April 24, 2018, OOCL revealed that it entered into a contract with Microsoft Research Asia (MSRA) to explore the capabilities of artificial intelligence in improving network operations and increasing efficiency in the shipping order industry.

OOCL Hong Kong is currently the largest container ship in the world. It was built in the South Korean shipyard Samsung Heavy Industries in Gaoje and put into service in 2017. The ship became the first container ship with a capacity of over 21,000 TEU, thus reaching the Guinness record. OOCL Hong Kong connects the ports of the Far East with the ports of north-west Europe. The circular cruise route leads, among others through Shanghai, Ningbo, Singapore, the Suez Canal, Gdańsk, or Felixstowe.

The biggest container ships in the world

Below you can see the graphics that show how the ranking of the largest container ships in the world has been arranged over the years.

We can see how the container ships presented since 1956 and how their TEU capacity currently falls on the background of newly created transport ships.