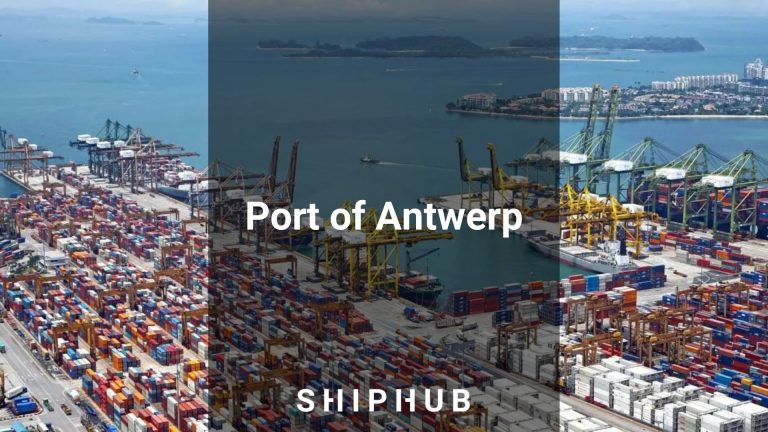 Port of Antwerp in Belgium

Port of Antwerp-Bruges (BEANR) is located in Flanders, in the city of Antwerp, the most populous city center in Belgium. Since it is strategically situated in the center of northwest Europe, the port connects other major European ports and ports on different continents (800 destinations). It receives ships carrying more than 20,000 TEU on a weekly basis.

The port is owned and managed by the Antwerp Port Authority, and the terminals are operated by various private companies. About 3.7% of Belgium’s population has a job thanks to the port.

The port is divided into two zones, the Left Bank and the Right Bank:

Port of Antwerp’s capacity doubled over the past two decades, reaching 12 million TEU.

Facilities at the port

History of the Port of Antwerp

Napoleon Bonaparte ordered the construction of Antwerp’s first lock and dock in 1811. Hence later, it was called the Bonaparte Dock. As time passed, the port expanded, and fortunately, it was relatively undamaged during World War II.

After the war, the port received funds from the American Marshall Plan to modernize and expand. Thus, the Berendrecht Lock was added; at that time, it was the world’s largest shipping lock. From the late ’80s, the port focused on developing fast turnround tidal berths, both on the Right Bank (Europa Terminal and the North Sea Terminal) and the Left Bank (Deurganck Dock).

Now, the port of Antwerp is the second biggest shipping port in Europe (after the port of Rotterdam) in the world’s top 15, annually handling more than 240 million tons of freight. It is home to currently the largest lock in the world, the Kieldrecht lock, and the largest tidal dock, the Deurganck Dock. Both are confirmed by the Guinness Book of World Records.

To expand, the port of Antwerp acquired land from General Motors, which used to be a factory. Extra Container Capacity Antwerp (ECA) project began with a goal of optimizing existing capacity. After over a decade, the project’s first phase of three was completed. When the whole project is completed, it will be possible for two mega-max ships to operate simultaneously with a draught of 16 meters.

The port of Antwerp helps to combat climate change. The Port of Antwerp began using the first dual-fuel tug powered by hydrogen and diesel. Apart from that, the port takes part in the circular economy to become carbon-neutral by 2050.

The port was a part of COREALIS, a program that strived to change industry policy for the better and focused on six different challenges of the maritime sector: safety and security, interport, mobility, and sustainable modal shift, process and document flow, sustainability, and education through gamification.

The port uses smart technologies like a digital twin port, autonomous drones and vehicles, a 5G network, smart sensors and cameras. The technologies are making the port safer, smarter, and more efficient.

Shipping companies operating in the port

The port of Antwerp has over 300 liner services and is a base for more than 200 forwarding companies. The top five routes connect the port with Houston (Texas), Minneapolis, New York, Seattle, and Valencia. Some of the shipping lines operating in the port of Antwerp:

Learn about ports around the world.