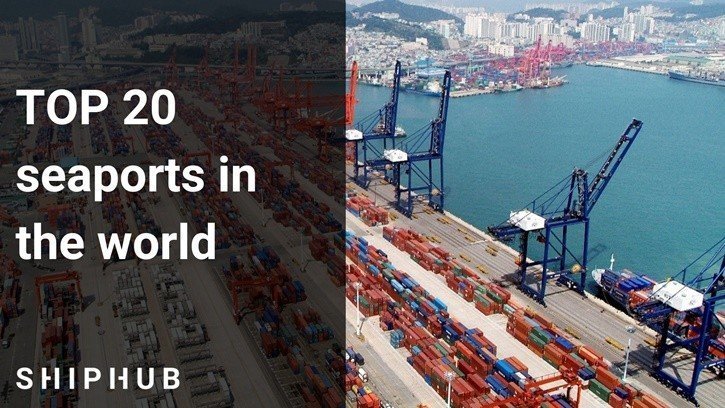 The world’s busiest ports continue to grow larger and more efficient every year.  It is estimated that  90% of world trade is facilitated by maritime shipping. According to the statistics in the last four years, the median annual volume of the top 50 ports jumped from 5.49 to 5.86 million TEUs. Here are the world’s 20 largest ports, using the most recent data from the World Shipping Council:

As you can see, only five of the top 20 ports in the world are now located outside of East Asia. Only three European ports have entered the top 20. What is more, nowadays, both Hong Kong and Singapore are facing increased competition from neighboring ports.

Port of Shanghai – Seaports in the world

The Port of Shanghai is the busiest port in the world in terms of cargo tonnage and comprises a deep-sea port and a river port, and it is the most important gateway for foreign trade.  The port covers an area of 3,619.6km² at the mouth of the Yangtze River.

Shanghai remains the undisputed no. 1 container port in mainland China and the world, with over 42 million TEU in 2018 (+4.4%). The port is considered the world’s fastest-growing economy.

Port of Singapore – Seaports in the world

Port of Singapore is currently the world’s second-busiest port in terms of total shipping tonnage. According to data, around 80% of the containers that arrive in Singapore are transhipped to other ports. The port handles around one-fifth of global container transshipment throughput.

The port is equipped with 204 quay cranes and number of gantry cranes. Each operator can handle six cranes with the help of remote-controlled bridge cranes. The quay cranes have twin-lift capability and can outreach across 22 rows of containers. The port also operates mobile harbor cranes to handle heavy-lift project cargo.

The Port of Shenzhen is one of the busiest and fastest-growing ports in the world. It is located in China and serves as a base for trade between Hong Kong and Mainland China ( it is located about 37.04 km from Hong Kong to the south and 111.12 km from Guangzhou to the north).

The annual transshipment capacity is about 194.9 million tonnes and 18.91 TEU. Container throughput is steadily increasing. In 2018 the throughput was 27.74 million TEU.

Port of Ningbo-Zhoushan – Seaports in the world

It is another Chinese port that has great growth potential. Ningbo Zhoushan Port is considered the busiest port in China. The port operates 246 shipping routes at the end of 2018.

Annual cargo throughput exceeds 1 billion tonnes at Ningbo Zhoushan port in east China’s Zhejiang Province in 2018. With this, the Port became the world’s first to surpass such volume. As for the sea-rail transport services themselves, the port handled over 600,000 standard containers in 2018. This is a year-on-year increase of over 50%.

Port of Guangzhou – Seaports in the world

Port of Guangzhou commands the number 5th Slot on the Top Global Ports with a 2018 record-breaking performance of 21.92 Million TEUs (up 7.6% vs. 2017). Port of Nansha, the only Deep-Water Port of the Guangzhou Port, contributed more than 70% of the total volume in Port of Guangzhou.

The Port of Busan (also called Pusan) is located at the mouth of the Naktong River in South Korea. Container throughput at the port grew 5.8% year on year to 21.67 million TEUs, clearing its goal of handling 21.5 million TEUs and establishing a new yearly record.

Port of Hong Kong – Seaports in the world

In Qingdao, the key container terminals are QQCT, QQCTN, QQCTU, and QQCTUA. The terminals are located on the western bank of Jiaozhou Bay, inside Qingdao Economic & Technology Development Zone and Qingdao Free Trade Port Area.

It covers an area of 613.3 hectares. The Port of Qingdao’s bulk terminal covers more than 38 hectares, and it contains over 582 meters (1.9 thousand feet) of moorage. It is equipped with ample dockside mobile cranes and a variety of heavy-lift equipment.

The city of Qingdao is famous and develops thanks to its commercial and fishing port.

The Port of Tianjin is also known as the Port of Tanggu. It is the largest port in Northern China and the main maritime gateway to Beijing.

China’s Tianjin port is expected to see a marked increase in throughput by 2020 thanks to rising cargo volume after the city was allowed to pilot free trade zone.

The logo of the company implies that the Port of Tianjin sails against the winds of adversity to achieve greater prosperity.

Port of Jebel Ali – Seaports in the world

The UEA’s free trade zones, the biggest of which is the Jebel Ali Free Trade Zone, allow foreign companies to own up to 100% equity, as well as be exempt from import and export taxes.

Furthermore, its logistics sector has also benefitted massively from vast investment in physical infrastructures, such as the expansion of the Jebel Ali Port to handling capacity of 22.1 million TEU.

Port of Rotterdam – Seaports in the world

Container throughput, one of the strategic priorities of the Port Authority, rose by 4.8% (in tonnes, +6.4% in TEU) by comparison with the first six months of 2018, which is also a new throughput record. That growth was mainly due to higher import and transshipment volumes.

It covers an area of 806 hectares and includes North Port, West Port, and South Port.

It is one of the fastest-growing ports in Northwestern Europe. It covers a range of 13 thousand hectares and employs over 150,000 people.

Recently, thanks to reconstruction and investments, the port can service the largest ships in the world with a capacity of over 20 thousand TEU.

The port of Antwerp has one of the best locations in the center of Europe, making it a very convenient place for transshipment.

It is is the largest harbor in Taiwan. The port is surrounded by the city districts of Gushan, Yancheng, Lingya, Cianjhen, Xiaogang, as well as Cijin. Taiwan International Ports Corporation operates the port of Kaohsiung.

The government of Taiwan is actively promoting the Port of Kaohsiung’s emergence as a key transshipment center for Asia-Pacific container shipping and global logistics. It can handle container vessels of up to 22,000 TEU.

The 2040 Master Plan for the Port of Kaohsiung promises to stimulate industrial development in the Greater Kaohsiung Area and open a “third port” to serve the import/export needs of southern Taiwan.

Port facilities are located in and around Xiamen Island in Fujian Province.

Besides, Xiamen Port has seen the completion of 57 routes linking “Belt and Road” countries, reaching 24 countries and regions. The Xiamen Port management proposed that in 2019, efforts will be made to create a world-class port business environment and strive to achieve a container throughput of 10.8 million TEUs.

Port of Dalian – Seaports in the world

Port of Dalian is the most northern ice-free port in China and the second-largest container transshipment hub in mainland China. It is located at the southern tip of the Liaodong Peninsula in Liaoning province in China.

It is also the trade gateway to the Pacific.

The Port of Los Angeles is America’s premier gateway for international commerce. It is located in San Pedro Bay, 25 miles south of downtown Los Angeles.

The Port of Tanjung Pelepas (PTP) is Malaysia’s most advanced container terminal, and it is strategically located at the confluence of the main east-west shipping lanes, which is why it is easily accessible from the Straits of Malacca.

The Port of Hamburg is the largest German port. It is also often referred to as the “Gateway to the World.” Container terminals allow about 12 million TEU to be reloaded every year. According to data from 2016, 8,9 million TEU was transshipped at the harbor. The official date of establishing the port is May 7, 1189.

All container terminals are equipped with integrated railway terminals, which positively affects the leading position of the port in Hamburg.

Further investments are planned to allow the largest container ships in the world to enter the port.

Port of Long Beach – Seaports in the world

The port’s second range in North America content is about 30 km south of Port Los Angeles. The port covers over 12 km2 and has 80 quays and 71 cranes that deal with container handling.

What is more, the port is known for its ecology and environmental protection. Among other ports, it is, without a doubt, the leader in this matter.